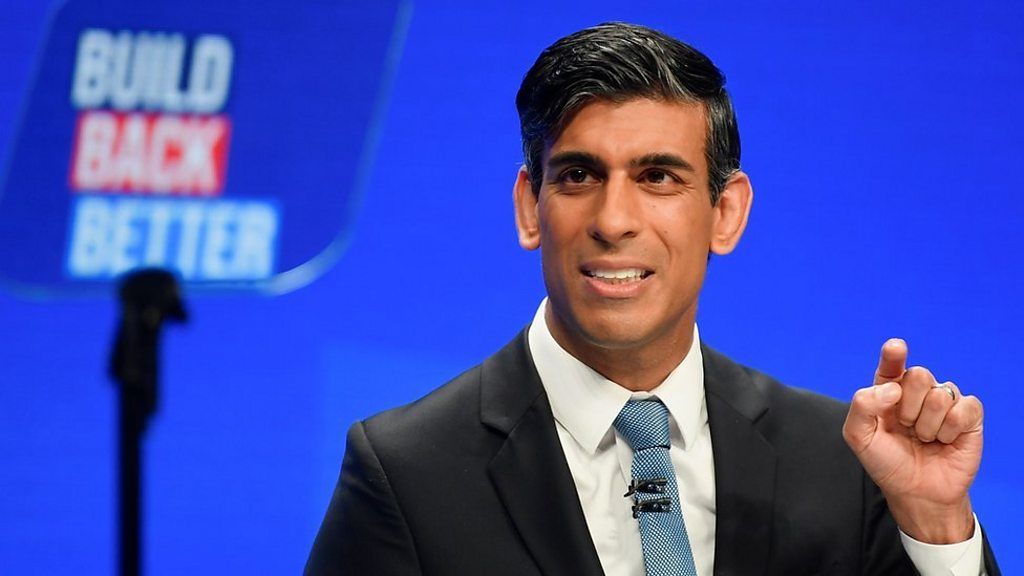 In his first conference speech as chancellor, he said he wanted lower taxes - but funding the pandemic recovery "comes with a cost".

Vowing that "we need to fix our public finances", he said allowing borrowing to rise further would be "immoral".

The comments come three weeks before his autumn Budget on 27 October.

He also told party delegates that leaving the EU was in the UK's long-term interests, despite current disruption to fuel and food supplies.

And he added he was "proud" to have backed Brexit, in spite of warnings before the 2016 referendum it could end his political career.

Mr Sunak's speech comes amid a difficult backdrop of rising food and energy prices, alongside supply chain disruption caused by a shortage of lorry drivers.

The government has so far rejected demands from the haulage industry for it to increase the 5,000 temporary visas it plans for foreign drivers to plug shortfalls.

In his speech, Mr Sunak insisted that despite "challenges", Brexit would foster a "culture of enterprise" and help the UK adapt to the modern world.

He also defended raising taxes to pay for the NHS and social care, insisting that it would be "irresponsible" to pay for investment with higher borrowing instead.

He told delegates the country should be grateful for "sound Conservative management" of the economy by his predecessors since 2010.

And whilst he acknowledged tax rises were unpopular and perceived as "un-Conservative", he said they were a better option than more debt.

"I'll tell you what is un-Conservative: Unfunded pledges, reckless borrowing, and soaring debt," he added.

"Yes, I want tax cuts. But in order to do that, our public finances must be put back on a sustainable footing."

There was no whizz-bangery in the chancellor's speech - no cranking of the huge economic levers on tax or spending, no huge headline grabbing policy.

And, a little like Rishi Sunak himself, it was quite short.

(He made a little joke about his stature himself...)

This felt like the first draft of Sunak-ism: where the chancellor has come from, what he's all about, where he might go in the future, to an audience where many will wonder if he might one day be prime minister.

There were repeated references to his time in California, that spot so often associated with sunshine and innovation.

After the public spending splurges of the pandemic, he portrayed himself as a traditional Conservative: cautious in how taxpayers' money is spent, drawn to cut taxes when he can - even though he's put them up.

This hoodie-wearing chancellor - although he did wear a suit for his speech - made 16 references to the "future," including the line "the future is here."

Whom could he have been referring to?

Against the backdrop of the withdrawal of a £20-a-week universal credit top-up, Mr Sunak also attacked Labour - which opposes the cut - for wanting struggling families to "lean ever more on the state".

"Is the answer to their hopes and dreams just to increase their benefits?," he asked, adding: "Be in no doubt, that is the essence of the Labour answer".

"Not only does Labour's approach not work in practice, it is a desperately sad vision for our future."

"But there is an alternative. An approach focused on good work, better skills, and higher wages."

Mr Sunak also announced the government would give funding to double the number of Turing research fellows investigating the potential of artificial intelligence.

He also committed £500m to renew job support programmes set up during the Covid pandemic, after the end of the furlough scheme last month.

The Kickstart Scheme - which subsidises eligible jobs for young people on universal credit - will be extended by three months to March 2022.

And the JETS scheme, which helps long-term unemployed people on universal credit, will be prolonged until September 2022.

The Treasury said that details will be confirmed at the Spending Review, which will take place alongside the Budget later this month.