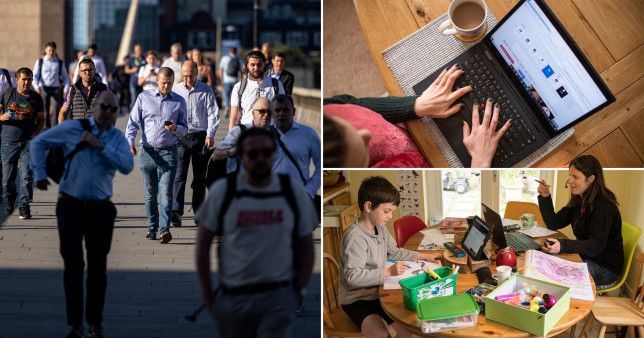 The Government is set to relax its working from home advice on July 19, Boris Johnson has said.

The Prime Minister suggested that the country needed to learn to live with coronavirus and that returning to offices would benefit the battered economy.

Mr Johnson outlined the move at a press conference on Monday afternoon, when he confirmed that England’s unlocking is set to go ahead as planned on ‘freedom day’, following a previous delay. That decision is likely to be confirmed next Monday, July 12.

He said: ‘It will no longer be necessary for government to instruct people to work from home so employers will be able to start planning a safe return to the workplace.’

For months, Government advice has been that ‘everyone who can work from home must do so’ but that is now set to change with ministers arguing that the public needs to take personal responsibility to slow the spread of the virus.

It comes despite surging Covid-19 case numbers – but limited growth in hospitalisations and deaths.


In response, the head of the TUC called on the Government to consult with unions and employers on workplace safety guidance to avoid ‘widespread confusion’ following the PM’s announcement on the easing of restrictions.

General Secretary Frances O’Grady said details around masks in workplaces must be clarified, along with changes to rules on sick pay and enshrining rights to flexible working in law.

She added: ‘As the work from home guidance ends, employers must acknowledge that one size does not fit all.

‘Otherwise there will be a new class divide between those who can work flexibly from home, and those who can’t.’

Meanwhile, bosses at John Lewis and Waitrose have confirmed they will introduce flexible working for their staff at head office, following the latest announcement of restrictions easing by the Government.

Andrew Murphy, executive director of operations for the John Lewis Partnership, said: ‘If restrictions are lifted on July 19 we won’t tell our head office partners where to work. The pandemic has forced us all to rethink the norm of five days in an office.

‘We will continue to support and enable our partners as they figure out how and where they work best for the type of work they do. I don’t believe anyone can make confident assertions about how this will play out in future years.’