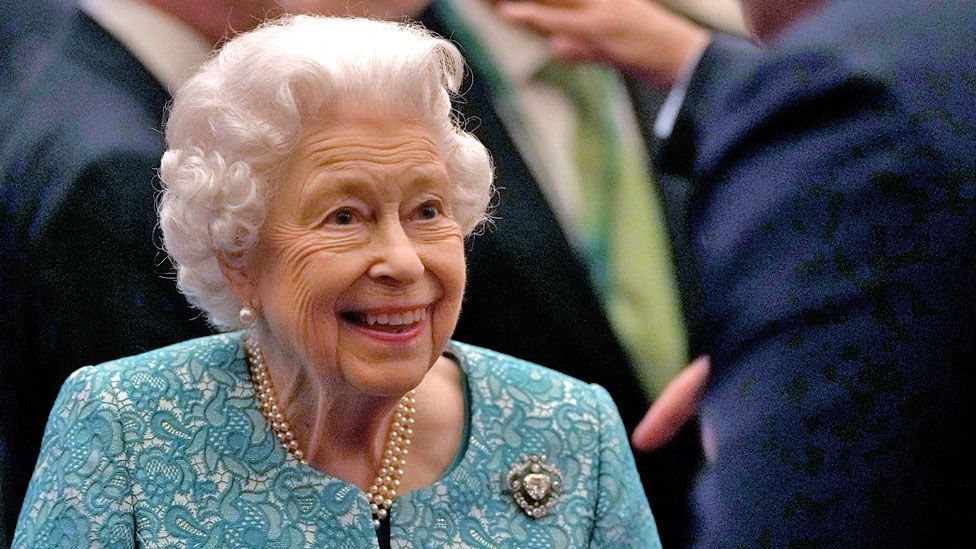 Buckingham Palace has unveiled the full line-up of celebrations to mark the Queen's Platinum Jubilee this year.

Street parties, a concert with some of the world's "biggest entertainment stars" and a chance to see the Queen's homes up close are all part of the plan to mark her 70 years on the throne.

It will culminate in a four-day UK bank holiday weekend from 2 to 5 June.

The first event begins on Monday, with a competition to invent a new pudding to celebrate the Queen's reign.

Finalists will be judged by an expert panel including Dame Mary Berry and Masterchef's Monica Galetti.

The winning recipe will be made available to the public and the pudding will be enjoyed at Big Jubilee Lunches during the bank holiday weekend.

On 6 February the Queen will become the first British monarch to celebrate a Platinum Jubilee, marking a 70-year reign.

A series of celebrations will take place throughout the year. 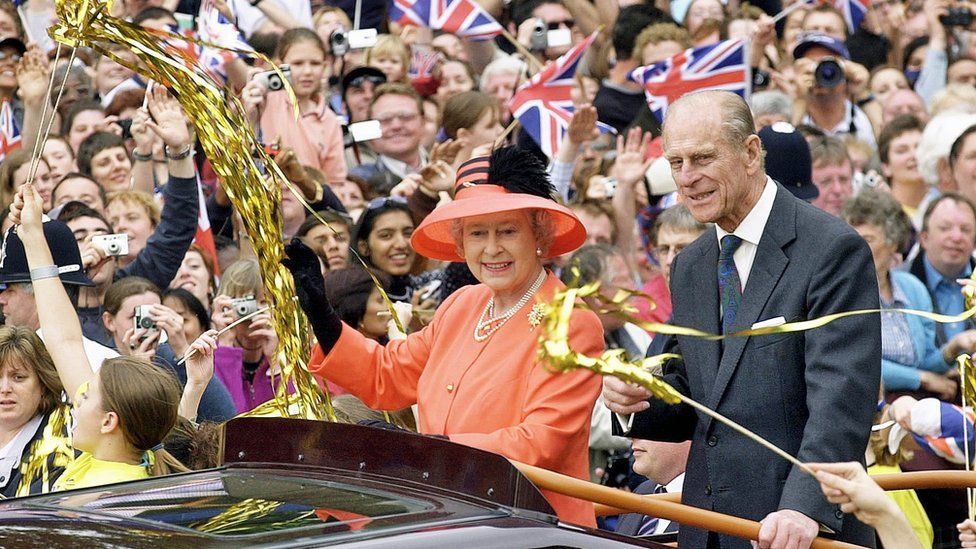 The Queen marked 50 years on the throne in 2002, with the Duke of Edinburgh by her side 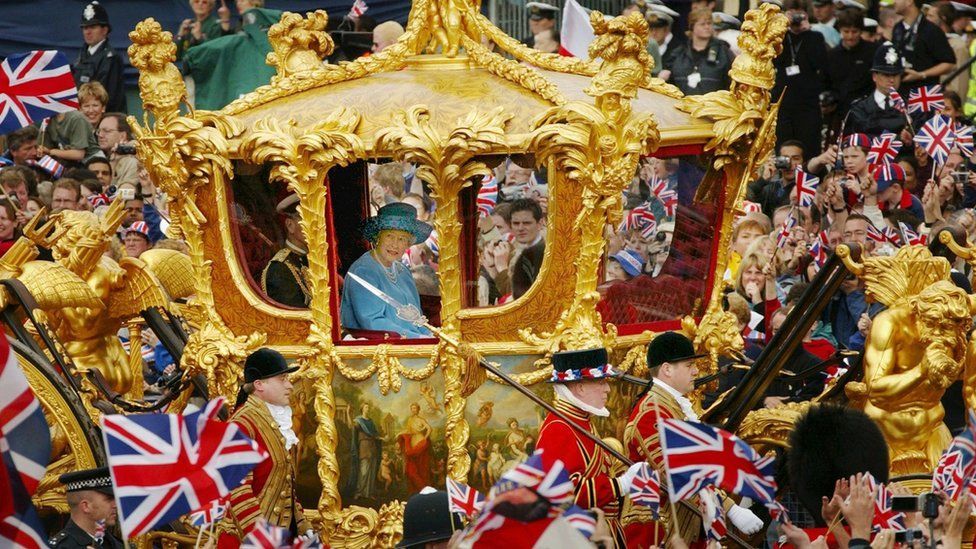 As with the Queen's Golden and Diamond Jubilees, the first week in June has been chosen for the celebratory weekend, with the summer offering a better chance of good weather than February.

To create the four-day weekend, the late May Spring Bank Holiday will be moved to 2 June and an additional one-off bank holiday on 3 June created.

It is not clear which events the Queen will attend herself. She was advised by her medical team to rest for several weeks after an overnight hospital stay in October.

The majority of the jubilee duties will probably be given to the rest of the family, including the heir to the throne, the Prince of Wales, alongside his wife the Duchess of Cornwall.

This jubilee will be the Queen's first without her husband, the Duke of Edinburgh, who died in April last year.

It's going to be puddings, parties, parades and pageants, in honour of the platinum jubilee.

There isn't really a template for celebrating a British monarch's 70-year reign, because it's not happened before.

The nearest was Queen Victoria's 63 years and elsewhere you have to go back to 18th-Century France and Louis XIV, who reached 72 years.

In this current bleak mid-Covid winter, the jubilee offers the warming prospect of a four-day bank holiday in June, with concerts, parties and pubs open until 1am.

The "platinum pudding" competition is in the tradition of royal-related dishes like Coronation Chicken, invented for the Queen's coronation in 1953. So expect a lot of trifling puns.

The celebrations are also a reminder of how much the Queen has been a constant figure. A recent study showed for 85% of the population she's the only monarch they've ever known.

This will be a marker for memories in many people's lives. 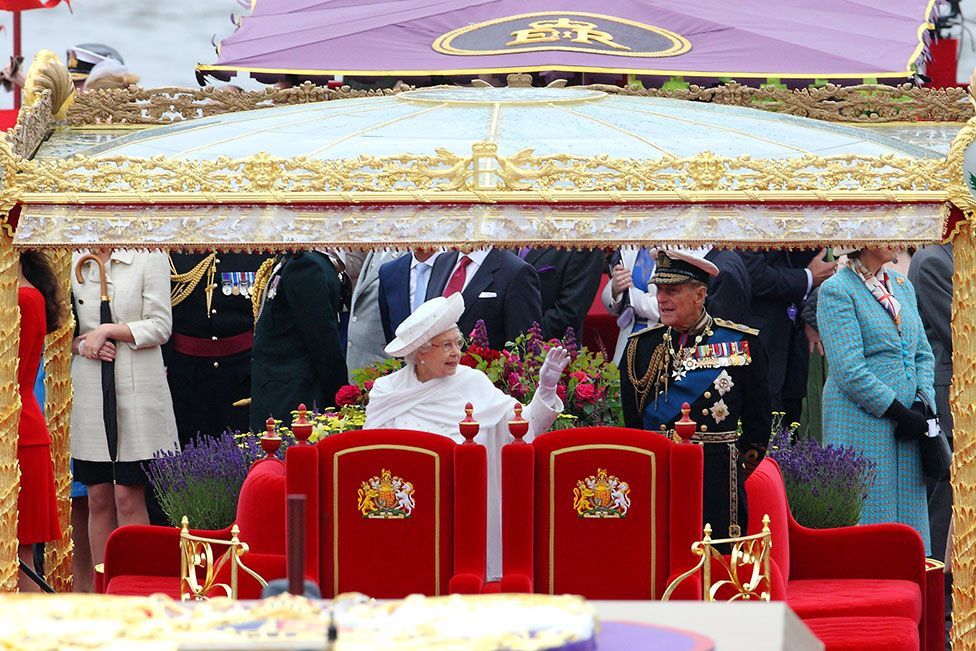 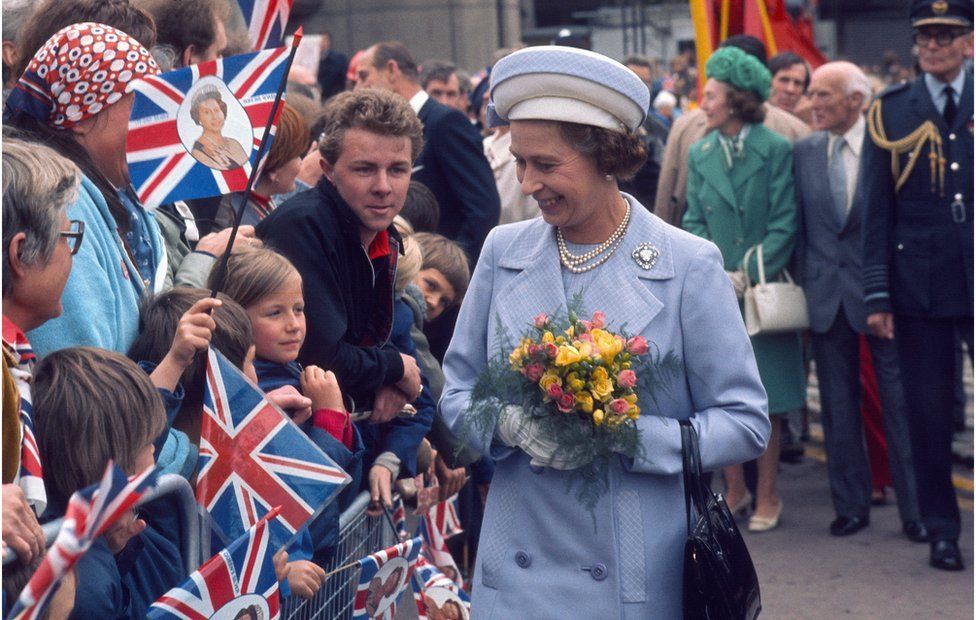 The Queen taking part in a Silver Jubilee walkabout in 1977

During the festivities, Sandringham and Balmoral will be open for visitors to enjoy the celebrations across the long weekend in June.

And during the Platinum Jubilee Pageant, a River Of Hope - made up of 200 silk flags decorated with images of hope drawn by children - will make its way along the Mall in central London.

As part of the Queen's Green Canopy initiative, some 60,000 trees have already been planted to mark the year, as people have been encouraged to "plant a tree for the jubilee".

On 10 January the Platinum Pudding Competition starts. Members of the public are invited to create a dish to dedicate to the Queen's reign.

From 12 to 15 May, more than 500 horses and 1,000 performers will take part in a 90-minute show at Windsor Castle, taking the audience on a journey through history from Elizabeth I to present day.

The first day of the long weekend is Thursday 2 June and will see Trooping the Colour held in full for the first time since the pandemic. There will be more than 1,400 parading soldiers, 200 horses and 400 musicians taking part.

Also that day, Platinum Jubilee beacons will be lit in more than 1,500 locations across the UK, the Channel Islands, Isle of Man and UK Overseas Territories. For the first time, the capital cities of Commonwealth countries will also light beacons.

On Friday 3 June - the second day of the Bank Holiday weekend - a Service of Thanksgiving for the Queen's reign will be held at St Paul's Cathedral.

On Saturday 4 June there will be a Platinum Party at Buckingham Palace, where members of the public will be invited to apply to attend a live concert. Performers have yet to be named, but it is billed as bringing together some of the world's biggest stars to celebrate the most significant moments from the Queen's seven-decade reign. The ballot for UK residents to secure tickets will be launched in February.

On Sunday 5 June people across the country will be invited to sit down together to take part in the Big Jubilee Lunch, with street parties held across the UK. That day's events will also include the Platinum Jubilee Pageant, which will feature 5,000 people from the UK and the Commonwealth performing around the area of Buckingham Palace. The palace promises "pomp and ceremony, street arts, theatre, music, circus, costumes as well as cutting-edge visual technology".

Primary and secondary school children are invited to create a picture of their hopes and aspirations for the planet over the next 70 years. A selection of these will be transferred on to silk flags, which will carried by secondary school pupils in the pageant.

In July, three displays marking the Queen's accession to the throne, the coronation and jubilees will be put on at Buckingham Palace, Windsor Castle and the Palace of Holyroodhouse. It will include portraits as well as the jewellery and outfits worn for each occasion.