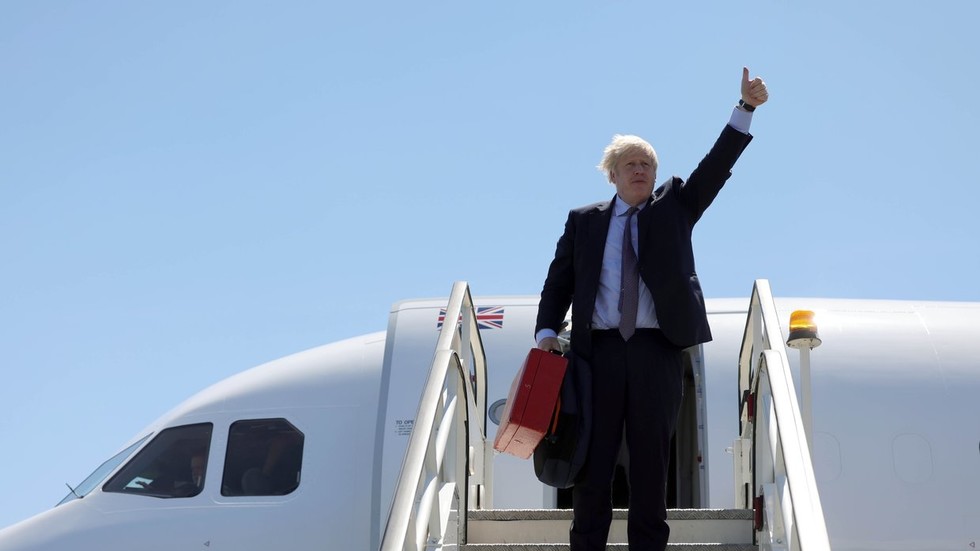 Boris Johnson has been mercilessly heckled after flying to a G7 summit in Cornwall – where he says environmental issues are top of the agenda. The UK prime minister insists there is nothing odd with his choice of transport.

The British leader tweeted out an eco-friendly message to the world after his plane touched down in Newquay on Wednesday evening.

“I’ve arrived in Cornwall for this year’s @G7 where I’ll be asking my fellow leaders to rise to the challenge of beating the pandemic and building back better, fairer and greener,” he wrote, including a photograph of himself giving a thumbs-up sign as he exited a private jet.

Many cited experts and articles arguing that zooming around in a private jet is possibly the “worst thing” you can do if you want to protect the environment.

The UK chapter of Extinction Rebellion, a climate activism group, tweeted a photograph of a BoJo-like mannequin with its head in the sand.

Traveling some 250 miles (400km) in a private jet to attend an international forum which aims to address climate issues is “plane stupid,” quipped Labour’s shadow environment secretary, Luke Pollard, adding that the prime minister should have taken the train.

“The irony and lack of self-awareness of this message whilst walking down the stairs or a private jet is...not a good look!!” concluded one observer.

Others recalled how Swedish climate activist Greta Thunberg had sailed across the Atlantic in order to attend climate summits and protests, preferring the slow mode of transport over emissions-heavy air travel – in sharp contrast to Johnson’s behavior.

However, Thunberg’s environmentally-conscious boat trip was later criticised after it was revealed that the sailing team that delivered the Swedish teen to the United States flew two crew members across the Atlantic to bring the yacht back to its home port.

But Johnson didn’t express regret when members of the press inquired about his questionable travel arrangements.

“If you attack my arrival by plane, I respectfully point out that the UK is actually in the lead in developing sustainable aviation fuel,” the prime minister argued. He pointed to the fact that his 10-point plan for ushering in a “green industrial revolution” includes the goal of getting to “jet zero as well as net zero.”

The UK assumed the presidency of the G7 this year, and has made climate change – together with the fight against Covid – one of the central parts of its agenda. The G7UK website lists “climate change and preserving the planet’s biodiversity” as a top policy priority. The Cornwall summit is billed as an opportunity for world leaders to “come together and discuss how to respond to global challenges like coronavirus and climate change.”