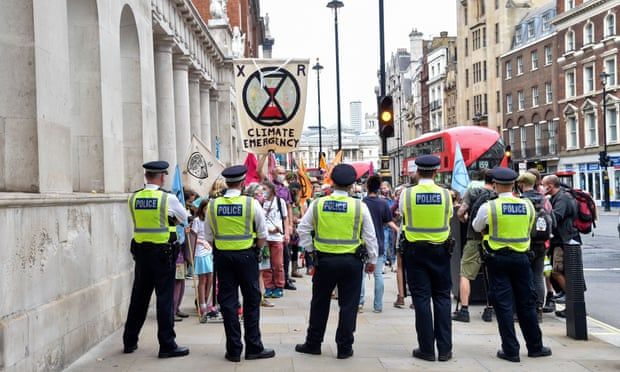 A former police chief has warned that new protest laws move Britain dangerously towards “paramilitary policing” and that UK ministers are “flexing their muscles via their police forces” like repressive regimes around the world.

The warning from Michael Barton, the former chief constable of Durham comes as policing braces itself for a report expected within the next 48 hours after Metropolitan police officers were accused of heavy-handed tactics at a vigil on Clapham Common for Sarah Everard.

Scenes of officers grappling with women led to outrage with calls for the resignation of the commissioner, Cressida Dick.

The home secretary ordered a report expected on Monday or Tuesday from Her Majesty’s Inspectorate of Constabulary. The key question it will answer will be whether the Met’s actions were proportionate or not.

As the new protest laws pass through parliament, Barton and another former senior policing leader, Sir Peter Fahy, told the Guardian they held deep concerns about the dangers the new laws posed for civil liberties already reeling from a year of emergency Covid laws.

The police, crime, sentencing and courts bill, currently passing through parliament, will afford new powers to officers to tackle protests, including measures aimed at static protests and a new offence of “intentionally or recklessly causing public nuisance”, which is in part defined as causing “serious annoyance” or “serious inconvenience”.

Barton, was head of crime operations for policing nationally, and led the Durham constabulary until 2019, which inspectors rated as one of the best performing forces in Britain.

He told the Guardian: “I’m not in favour of even more restrictive measures. Surely after an historically unprecedented year-long curfew, in peacetime, the government could show some common sense and gratitude for such incredible forbearance to allow civil liberties to once again flourish. Or are they happy to be linked to the repressive regimes currently flexing their muscles via their police forces?

“Fortunately, in the UK we are not a paramilitary-style police force. But these powers dangerously edge in that direction. Police chiefs will be seen as the arbiters of what is and is not allowed when it comes to protest. Democracies thrive on protest. This government has condemned what has happened in the Ukraine but those same protesters would fall foul of our new laws.”

Barton said the move represented a change in the British style of policing by consent, with officers being “citizens in uniform” who are part of their communities and not above them “because police officers are telling people what to do, not negotiating with them”. He added: “I don’t see anything wrong with the current laws. Protests sometimes means people are inconvenienced.”

Police will be able to impose a start and finish time and set noise limits at static protests and apply these rules to a demonstration by just one person.

Fahy, the former chief constable of Greater Manchester police and former vice-chair of the police chiefs’ body, said the proposed protest laws were a mistake and posed a danger for policing.

He said lessons from the past suggested danger, citing the quashing this week of 1970s convictions of trade union activists including the actor Ricky Tomlinson as a warning from history.

“It is short-term and politically driven,” he said. “It is a reaction to what happened with Extinction Rebellion and Black Lives Matter [protests], in the same way Ricky Tomlinson was a reaction to the industrial strife of the 1970s. Policing was drawn into a particular stance and pose.

“It reminds me of the miners’ strike when policing was mobilised for a political reason. It took policing a long time to recover. Policing should be very careful not to be drawn into the situation of being arbiters of which protests can go ahead, and become stuck in the middle. The policing of protest can cause long-term damage.”

Fahy added: “Policing is not always about the majority, sometimes it is about protecting rights of the minority. I’m not sure a mature democracy should have the police deciding which protests should go ahead.”

Their comments came as at least 10 people were arrested on Friday at a “kill the bill” demonstration and a Daily Mirror journalist shared video footage that appeared to show police pushing him and hitting him with a baton as he shouted that he was a member of the press.

Last week, the Guardian revealed the home secretary had backed police stepping in to enforce Covid laws, which bar gatherings. Priti Patel’s supporters said she was right to criticise the Met after the event.

A Home Office spokesperson said: “As the home secretary has made clear, the right to protest is a cornerstone of our democracy and the government is absolutely committed to maintaining freedom of expression.

“It is wrong to claim these measures will stop people from carrying out their civic right to protest. People will still be able to protest, but they cannot be permitted to trample on the rights of local businesses and communities.

“These measures will prevent misery to the public and the loss of millions of pounds to the taxpayers and businesses, have been requested by chief constables, including the Met, and are backed by the independent policing inspectorate.”
#priti patel  #covid
Add Comment