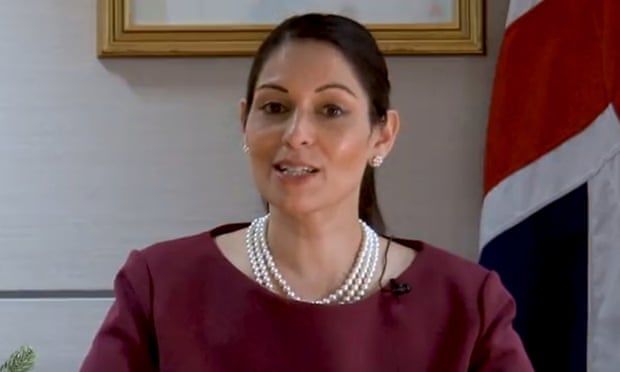 The home secretary has said she intends to crack down on eco protesters and end the “legal merry-go-round” of “spurious” asylum seeker claims in 2022.

In a new year video message posted on social media, Priti Patel said she was proud of many things the government had achieved in 2021, such as the launch of its strategy to tackle violence against women and girls.

But she said there was “much more to do” this year, including cracking down on eco protesters on the country’s roads, who she said had “caused misery to the law-abiding public”.

Patel added that she was committed to tightening asylum laws and stopping crossings over the channel from France, after a year that saw more than 25,000 people reach the UK in small boats.

In response the shadow home secretary, Yvette Cooper, and a leading human rights barrister said the government needed to look at its own role in asylum claims. Extinction Rebellion also accused the government of not taking necessary action over the climate crisis and wrongly blaming protesters.

Looking ahead to 2022, Patel said it was “vital” the government’s police and crime bill passed through parliament.

“The bill will introduce mandatory life sentences for those who kill an emergency worker in the course of their duty and also crack down on the so-called eco protesters on our roads and motorways that have caused misery to the law-abiding public,” she said.

“I will also continue to prioritise fixing our broken asylum system. It has been untouched for two decades, but passing our (nationality and) borders bill into law in 2022 will finally give us the powers we need to deliver long-overdue change.

“A fairer system deterring illegal entry across the Channel by cracking down on people smugglers and ending the legal merry-go-round of spurious asylum claims is what the British people expect and we will deliver.”

Patel also said the streets were safer thanks to a reduction in knife crime, gun crime and murders.

According to the Office for National Statistics (ONS), there was an 8% decrease in knife-enabled crime in the year ending June 2021, compared with the previous year.

Homicides were also down 11%, it said, while offences involving firearms fell by 6%. All figures were for crimes recorded by the police in England and Wales.

However the ONS stressed that patterns of crime over that period had been “significantly affected” by the Covid pandemic and government instructions to limit social contact.

Patel said: “Whether it be cutting crime, keeping our country safe from terrorism or controlling our borders, we have a range of plans in progress to deliver for the British people. That is an ambitious programme, but one I will be relentless in delivering as we focus on building back safer in the year ahead.”

Adam Wagner, a human rights barrister at Doughty Street chambers, said the Home Office needed to review its own role in asylum claims rather than place responsibility on lawyers.

“This home secretary, and the government she represents, spend too much time making out that lawyers and legal process are somehow responsible for the broken asylum system,” he said.

“The truth is that almost half of all asylum appeals are successful – and the reason for that is a poorly resourced Home Office which blames everyone but itself for shoddy decision-making. The asylum system protects the world’s most vulnerable and we should all focus on doing better by them.”

A spokesperson for Extinction Rebellion said: “This is the action of a government who are clinging on to a model of business as usual that is heading us towards disaster and they would rather imprison grandparents, teachers and priests than face the scale of the changes that they need to make.”

Labour’s shadow home secretary, Yvette Cooper, said the government had the wrong priorities: “Prosecutions have plummeted, recorded violent crime and antisocial behaviour are up, just 1.4% of rapes are going to court and more victims are being let down. Asylum decisions are down, the backlog is going up, dangerous boat crossings are increasing, and safe, legal routes are being cut.

Cooper said that 95% of Windrush scandal victims have had no compensation as yet and added: “The Home Office plan for 2022 should be to put right these deep-rooted problems caused by 11 years of Conservative policies. Instead, this is a Home Office of slogans not solutions so they just keep making things worse.”
#priti patel  #covid
Add Comment