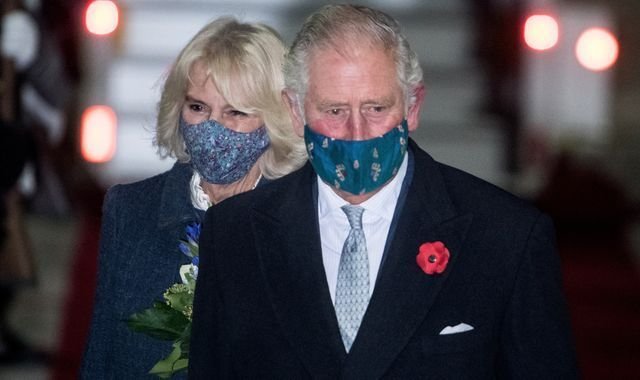 The Prince of Wales will stress the need for Britain and Germany to &quot;reaffirm our bond for the years ahead&quot; during a historic trip to Berlin as tense Brexit talks continue.

Prince Charles and the Duchess of Cornwall will attend the central remembrance ceremony in Berlin to commemorate the annual national day of mourning tomorrow, at the request of the British government, following an invitation from the president of Germany, Frank-Walter Steinmeier.

It will be the first time a member of the British Royal Family has ever attended the ceremony.

The visit and speech can be seen as display of how the UK government still wish to be seen to be extending the hand of friendship to its EU neighbours as Brexit trade talks continue.

The prince will say: "As our countries begin this new chapter in our long history, let us reaffirm our bond for the years ahead.

"Let us remember all victims of war, tyranny and persecution; those who laid down their lives for the freedoms we cherish, and those who struggle for these freedoms to this day.

"They inspire us to strive for a better tomorrow - let us make this our common cause."

He will also reflect on the shared interests and goals of the two countries, including climate change and combating racial and religious hatred.

Prince Charles will add: "We must be resolute in addressing acts of unspeakable cruelty against people for reasons of their religion, their race or their beliefs, wherever they occur in the world.

"We must stand alongside each in determined defence of the future we owe our children and our grandchildren.

"The challenges to that future are manifest - whether from this dreadful pandemic which threatens not just our public health but our prosperity and security; or from the existential threat to our planet, and our way of life, from climate change and catastrophic biodiversity loss.

"These crises demand that we act together, and the partnership between the United Kingdom and Germany offers such a vital opportunity in this regard.

"We are heavily invested in each other's futures, such that our national interests, whilst distinct, will always be entwined."

The prince, who is celebrating his 72nd birthday today, and Camilla flew to Germany this evening on RAF Voyager, with its new union flag colour scheme.

It is a rare overseas visit for members of the Royal Family this year.

The usual programme of foreign tours has been cancelled over the past nine months because of COVID-19.

Prince Charles and Camilla will attend the wreath-laying ceremony at the Neue Wache Memorial, before joining the Central Remembrance Ceremony at the German parliament, where the prince will deliver his speech.

It comes after a week of ongoing Brexit negotiations in London. Talks on a free trade agreement have been put on "pause" over the weekend before resuming next week in Brussels.

While a number of deadlines have come and gone, there is increasing concern that if an agreement cannot be reached in the coming days it will be too late to implement before 1 January.

The national day of mourning in Germany is focusing this year on the German-British friendship, and how it has grown since the end of the Second World War.

The event pays tribute to the Allied commitment to the liberation from Nazi occupation and to the reconstruction, re-democratisation and subsequent reunification of Germany. It also remembers all victims of war and tyranny.
Add Comment