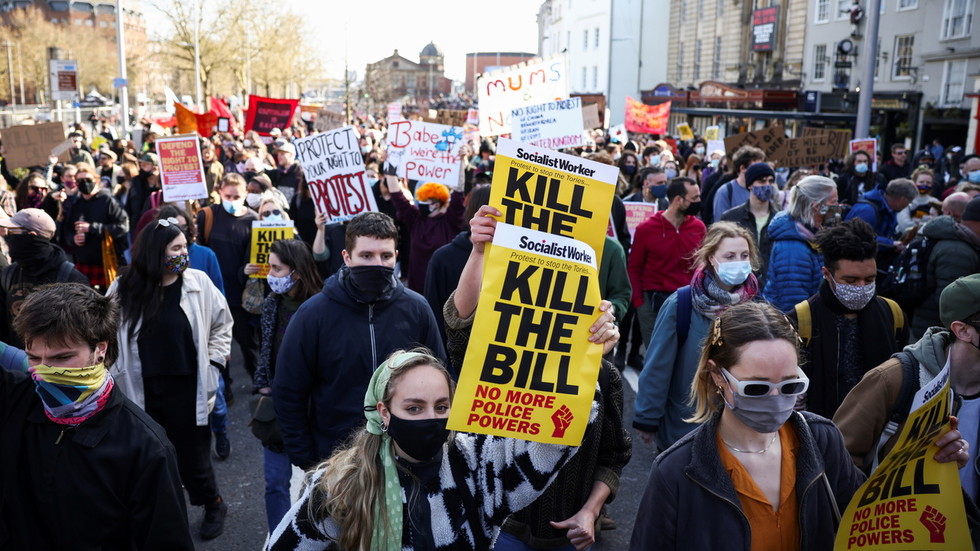 Protests in the UK over proposed legislation that would crack down on public demonstrations have led to ten officers being injured and dozens people arrested, according to police, who describe the event as a “policing operation.”

“Today’s policing operation is still ongoing and arrest numbers may rise, but at this time, 26 people have been arrested for a variety of offences,” London’s Metropolitan Police announced on Saturday hours after numerous protests kicked off in 25 cities in the UK, including London.

It was also revealed that 10 officers have sustained injuries “during the operation,” but none of them have been serious.

In a statement, Commander Ade Adelekan, who is leading the “policing operation,” said the “vast majority” of protesters have adhered to social distancing guidelines “engaged with my officers when required and left when asked.”

A small majority being less cooperative, however, led police to move to “the enforcement stage,” according to Adelekan.

He added that the protests threatened the “progress” that has been made in the fight against Covid-19, and blasted “the selfish actions of a small number of people.”

"We remain in the middle of a global pandemic and we have made great progress in controlling the spread of the virus; we will not allow the selfish actions of a small number of people to put Londoners progress in jeopardy."

Just before their update, police urged people to “leave and return home.” Officials had previously warned citizens that such large demonstrations violate current Covid-19 restrictions and they could be fined by police.

Demonstrators on Saturday marched and gave speeches while holding signs with slogans such as ‘Kill the Bill,’ referring to the Police, Crime, Sentencing and Courts Bill. The proposed legislation would give police more authority in restricting public protests, supposedly in an effort to avoid rioting and destruction to property. Critics believe the “draconian” bill is thinly-veiled crackdown on the freedom of assembly, which has already been de-facto heavily restricted by the tough British Covid-19 regulations.