It is "disappointing" Covid rules were not followed in Downing Street, the government's chief scientific adviser, Sir Patrick Vallance, has said.

Sir Patrick said it was "really important" that everyone stuck to the rules aimed at curbing the virus.

Speaking after collecting an honour at Buckingham Palace for his work during the pandemic, he also recalled tough days as the virus took hold in 2020.

And he said next winter could be another test, but the NHS was prepared.

The scientist became a household name after regularly updating the public in televised Covid briefings from Downing Street, often standing alongside the prime minister during key moments in the pandemic.

The early days of the pandemic were the "darkest", he said, as lots of people became ill quickly amid "huge uncertainty" about the virus.

"Obviously people in the government fell ill and the prime minister was very ill and those were very difficult days.

Asked about the Partygate scandal, he said: "It was really important at all stages that everyone stuck to the rules. It works when people stuck to them. It is disappointing that that wasn't the case."

His comments come the day after Prime Minister Boris Johnson survived a confidence vote triggered by Tory MPs angry at staff partying in Downing Street while the UK was in lockdown.

Sir Patrick said the UK was now in a "very different position" with Covid because of high vaccination and immunity levels.

But he said there would be further waves of infection, "maybe next winter".

There would also probably be an annual vaccine for people over a certain age, he said, and eventually Covid would be "more like a flu wave that we get every winter".

"It will be difficult because there will be some people who are really affected by it but the key to this is proper vaccination and proper management in the health service.

"Then gradually over the next two or three years, I think this could settle into a background infection, but we are not quite there yet."

As the Duke of Cambridge presented Sir Patrick with an upgraded award, he joked that this was "second time lucky" as Sir Patrick was originally knighted in the 2019 New Year Honours list. 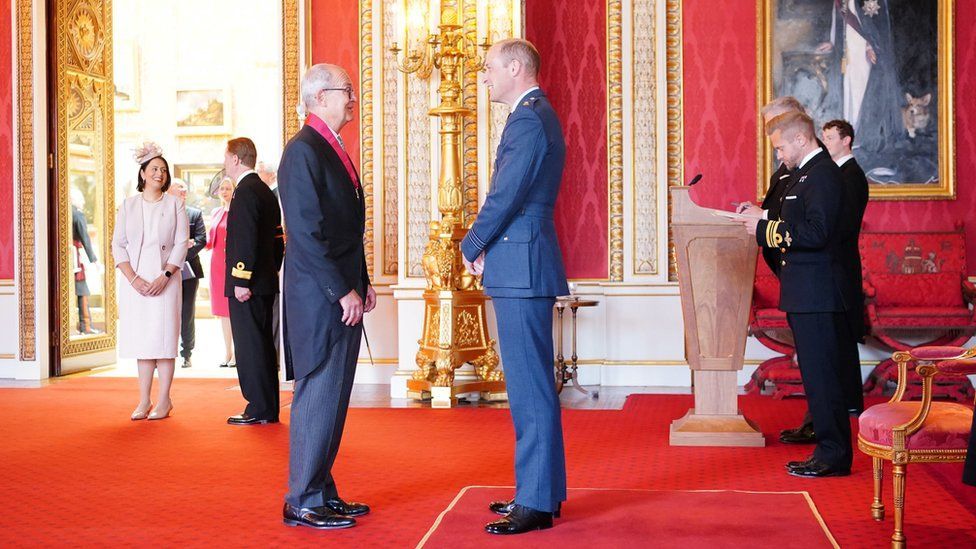 It makes him a Knight Commander of the Order of the Bath, an award that recognises the work of senior military officials and civil servants.

Sir Patrick - who previously was in charge of drug discovery at GlaxoSmithKline - said the most positive time in the pandemic was when the UK became the first place in the world with an approved vaccine.

"We thought 'this is going to be a way out of this', even though it was over a year before it was finally a way to getting out of it," he said. "It was the thing that changed the course of the pandemic."

Eighteen months after the vaccine rollout began, 93% of over-12s in the UK have now had a first dose, and 87% have had a second dose.

Sir Patrick also praised the "most amazing scientists and experts" who made sure the public was given up-to-date factual information during the pandemic.

"It has been one of those experiences where you realise the importance of other people, humanity and the goodwill, hard work, passion and expertise," he said.

"It is nice to feel trusted and I am grateful for that.