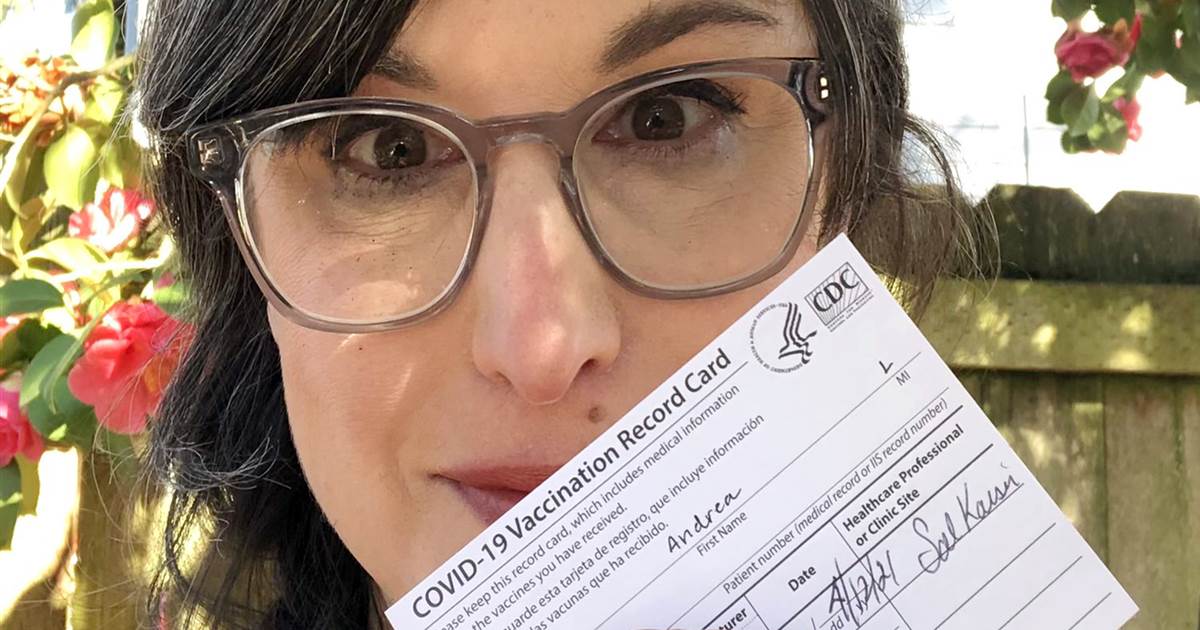 The pause on Tuesday had strangers hyping my supposedly inevitable demise. But victim-blaming is just a response to those people's perceived vulnerability.

On Monday morning, I got vaccinated in Washington state. Following the Faucian wisdom that the best vaccine to get is the first one you can get, I hadn’t shopped around, so I was pleasantly surprised when the medical professional administering the shot told me, “Today we’re doing the Johnson & Johnson,” as though it were a restaurant’s special of the day. One less appointment to schedule? Fine by me.

The sun was shining when I arrived back home that afternoon, and I snapped a selfie under the camellia tree in my backyard to post on Twitter — a “vaxxie,” the kind I’d been liking on other people’s feeds since the Covid-19 vaccine program began ramping up around the country. My social media timelines had been full of real-life friends and online pals mugging beneath their masks and flashing their vaccine cards for weeks.

I posted it with the caption, “Johnson & Johnson. One and done.”

I woke up Tuesday morning without any discernible side effects — but to a phone screen crowded with notifications. The ones from the New York Times and Washington Post announced that the Food and Drug Administration and the Centers for Disease Control and Prevention were enacting a “pause” on the J&J vaccine after six women experienced a rare blood-clotting reaction, one of which proved fatal. The ones from Twitter indicated that what I’d thought was an unassuming vaccine selfie was being retweeted with snarky comments from total strangers like, “One and done all right,” and, “Oh honey, I’ve got bad news.”

Amid a push to make vaccines available to as many eligible adults as possible, the former was very bad news — not just for Johnson & Johnson, which was already dealing with consumer fallout from a contaminated batch, but for ongoing efforts to combat vaccine hesitancy.

The CDC’s announcement was followed by a raft of explainers and analyses putting the new data in context with visualizations, noting the symptoms that recent recipients of the J&J vaccine should look out for and providing lists of conditions that are statistically more likely to result in clotting problems (including Covid-19 itself). But once the news landed, nothing could stop it from being used — as it was by Tuesday evening on Fox News — to furiously chum the waters of mainstream disinformation.

Those retweets of my vaxxie, meanwhile, were unsettling but not surprising: On Twitter (the most proudly miserable of the big social media platforms), total strangers gleefully anticipating my untimely demise isn’t a new experience. But that there are people searching for the phrase “Johnson & Johnson” to gloat about tweets like mine — which, to be clear, was about getting a vaccine to hopefully prevent severe illness and hospitalization from a Covid-19 infection, if not a Covid-19 infection itself — is a powerful reminder of the human instinct to apply moral and intellectual judgment to others in an effort to shield ourselves from the breathtaking cruelty of happenstance.

Some people want so desperately to believe that some unhappy accident or act of random violence couldn’t happen to them, so they cheer when it happens to others and make up reasons that it’s the fault of the victim.

We see it, especially on social media, all the time. Whenever something horrible — and even preventable, had the perpetrator not engaged in an act of violence — happens to someone, there’s a conspicuously casual moralizing about the victim that slips into certain people’s thinking, where they invoke “rationality” to assert that there is something they would have done differently, a moment in which they would have evaded a bad outcome by being smarter, more virtuous or more compliant. (Victim blaming is, of course, a recognized social-psychological phenomenon often used by people to deflect their own feelings of vulnerability, as a result of cognitive bias and the brain’s need to maintain a belief in a just world.)

And in the year since the Covid-19 pandemic arrived in the United States, the tension between public health needs and individual choices has bristled with similar moralizing and rationalizing impulses.

In the vacuum where a national plan to combat Covid-19 and strong messaging about what people could do to protect themselves and others should have been, some politicians, pundits, the existing anti-vaccine movement and people who mistake a “rugged individualist” ideology for some sort of super-immunity to a novel coronavirus made risky behavior a matter of personal and political pride. (Those who followed the president’s lead in downplaying the pandemic’s danger even moved the goal posts when necessary.) The people who caught Covid-19, who were hospitalized and died because of it, they seemed to say, had done something to deserve their fate — something that they, of course, could and would avoid. (It’s probably not a coincidence that this strain of thought emerged after evidence that Black and brown people were disproportionately likely to contract, be hospitalized for and die from Covid-19 or that obesity, diabetes and lung disease are co-morbidities.)

Suddenly, wearing a mask (or asking others to) became a justification for harassment and assault, while 300-person weddings (that invariably became superspreader events) were justified by their hosts because nobody really knows how bad this is, after all, and you have to make the right choice for you — a choice that, whoops, isn’t necessarily available to workers at these events who might have to choose between keeping their jobs and risking their health (and would then likely be blamed for getting sick).

This climate means that, if I do happen to be the next woman to die from an adverse reaction to Johnson & Johnson’s vaccine — and given that, of the 6.8 million people who received the shot, only six women so far have reported this reaction and only one has died, that’s statistically unlikely — there’s a not-insignificant number of people who will tell themselves that I deserved to do so because I was enough of a sheep to believe that the virus is real. Those people will likely just as readily feel certain that their distrust of scientists, medical experts and data will keep them from meeting that same end.

I probably can’t effectively protest that I’m not a sheep — that’s probably just what a sheep would do — so instead I’ll note that most of my life has been colored by a fatalism common among my cohort. Gen Xers came of age in the 1980s consuming vast quantities of mass media, and we gradually deduced from its messages that we were unlikely to live past our 20s.

Danger both extraordinary and mundane was everywhere: Sure, we might survive the toxic shock syndrome that lurked in super-absorbent tampons that Seventeen magazine warned us away from, but that wouldn’t save us from death by radioactive fallout from imminent nuclear war. Halloween candy laced with poison posed a risk only one month out of the year, but Tylenol laced with poison, on the other hand, supposedly could be anywhere and everywhere. And years before Donald Trump twisted a global pandemic into a partisan He-Man cosplay, Ronald Reagan was blithely ignoring the AIDS crisis because his friends in the increasingly influential Christian fundamentalist movement assured him it was God’s punishment for homosexuality and nothing for “good” Americans to fear.

But the real truth is that everything can kill you. And me. And the wags who snarked at my vaccine selfie after the fact.

We can’t stop the media and political forces who have inexplicably decided that anything done in the service of public health is an infringement on their individual rights — even by pointing out that not being forcibly exposed to a contagious, fast-moving virus actually benefits them, too. But we can help make sure that public health experts can do their work, which includes changing their plans in response to new information and keeping the vaccines' costs and benefits in perspective.

The blood clots are a tragedy for the women sickened by them, but people already acting in bad faith will portray it and the pause in the vaccine distribution as a scandal rather than a proactive effort to ensure confidence and regulatory oversight. In pausing distribution to further research the vaccine’s effects and develop messaging and protocols, the CDC is exhibiting a transparency that should reassure those like me who have gotten the shot, and those who are still waiting for one, that the safety of these new therapies is being taken as seriously as possible.

Science, unlike religion and some politicians, doesn’t pretend it’s infallible. And I don’t have any use for a know-nothing disguised as a know-it-all. There are enough of those people on Twitter.