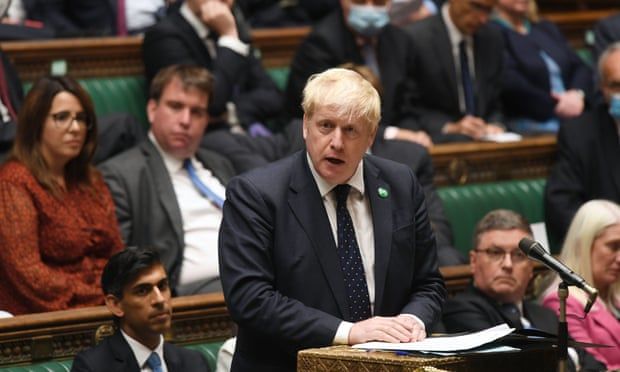 Only 10 Tory MPs vote against plan for national insurance rise

Only 10 Tory MPs rebelled against the government’s introduction of a manifesto-busting tax increase to fund social care reforms and the NHS backlog caused by Covid.

The 1.25 percentage point national insurance hike for workers and employers was announced last week by the prime minister, Boris Johnson, as a means to raise £12bn. The bill for the “health and social care levy” was introduced on Tuesday and was rushed through the Commons in a single day.

One of the rebels, John Baron, urged ministers not to “raise taxes on jobs ineffectively, and risk choking off an economic recovery”.

He told the Commons: “I reiterate the concern many of us have that today, in haste, we are discussing very important legislation that will introduce a massive tax increase – bigger than that of some budgets – and yet we do not have details of the social care reforms being proposed. That is not the way to go about business in this place.

“In my 20 years’ experience in this place, when we have rushed through decisions, as we are doing today – the measure was announced only last week – it has often increased the chance of big mistakes being made.

“I know that ministers on the frontbench are not listening, but I ask them even at this late stage to consider allowing more time to consider this important matter. If we do not know the detail of what is proposed, how in heaven are we to know how much money to raise for it?”

The nine other Tories to oppose the bill at its final stage were Philip Davies and Esther McVey – both part of the Blue Collar Conservatives group – as well as Ben Everitt, Marcus Fysh, Craig Mackinlay and new “red wall” MP Dehenna Davison. Longstanding Tory MPs Sir Christopher Chope, Richard Drax and John Redwood also rebelled against the new levy. There were 44 Conservatives who abstained, though some were cabinet ministers who would have been given permission to skip the vote due to other government business.

Despite the government fearing a mass Tory rebellion – and some concern even among the cabinet – only five MPs opposed the move in a vote last week that allowed the new bill to be introduced.

Steve Barclay, the chief secretary to the Treasury, insisted that the tax would raise money in a “responsible and fair way” and said it would tackle the NHS backlog and put adult social care “on a sustainable long-term footing, and end the situation in which those who need help in their old age risk losing everything to pay for it”.
#covid  #boris johnson  #johnson
Add Comment