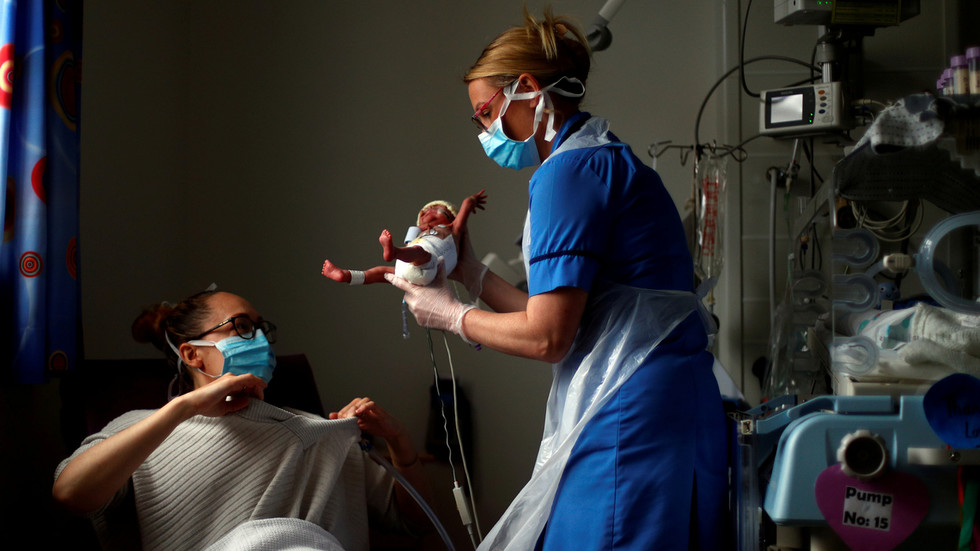 Some 14 percent of parents with sick and premature babies have been prevented from staying at their newborns' bedside by Covid-19 regulations adopted haphazardly by the National Health Service, according to a recent survey by premature babies' charity Bliss, cited by the Mail on Sunday.

A Hertfordshire mother told of being forced to "book a slot" to visit her five-week-premature daughter, with only one parent being allowed inside the neonatal intensive care unit (NICU) at Cambridge's Rosie Hospital. A first-time parent, Katie Orger complained that she missed the chance to breastfeed her little girl, and the lack of "skin-to-skin and lasting contact with my daughter" disrupted their bonding.

Another couple was deprived of the chance to visit their daughter together by Royal Bolton Hospital, restrictions they say estranged them from their baby, who was born with jaundice and required oxygen. "When I brought Emily home after nine days, it felt like someone else's child because the restrictions stopped that bond," Carly Maclean told Bliss.

During "normal" times, parents have 24-hour access to NICUs. Neonatal care staff and even national authorities like the Royal College of Pediatrics and Child Health have urged hospitals not to consider parents "visitors" with regard to social distancing and other coronavirus restrictions that are keeping them away from their children, but some individual hospitals have made their own rules.

Bliss concluded its report with a recommendation that the NHS issue a blanket order guaranteeing parents access to NICUs as a "matter of urgency." Its CEO Caroline Lee-Davey explained to the Mail that "our smallest and sickest babies need their parents at their side to give them the best chance of survival, even during a pandemic."

There's good reason for concern for both mothers and babies, as stillbirths nearly doubled between April and June in England while the country shut down "non-essential" care to fight the novel coronavirus. A report earlier this month in the Health Services Journal suggested the official line of "Stay Home, Protect the NHS, Save Lives" likely frightened ailing mothers away from seeking care – for themselves and their children.

The UK's lockdown resulted in a spike in excess deaths in private homes as sick people concerned about being a burden on the national system opted to stay home and suffer in private rather than seek treatment or diagnosis for maladies that may have been curable. Ambulance calls to suicides also soared during the first six weeks of lockdown as people were ill-equipped to deal with prolonged isolation.

The UK is far from the only country to adopt questionable treatment of new mothers under the guise of enforcing coronavirus restrictions, however. In France, women are being forced to "mask up" during labor, complicating delivery and even causing lasting psychological trauma according to a group campaigning to end the requirement.

In the US, conflicting guidance from health authorities has led hospitals to separate mothers from their newborns and prohibit holding or breastfeeding of babies – even without evidence the virus can be transmitted through breastmilk. In Canada, Montreal's Sainte-Justine Hospital quarantined a new mother for a whopping 55 days, refusing to allow her to hold or nurse her child for the first two months of its life.
Add Comment