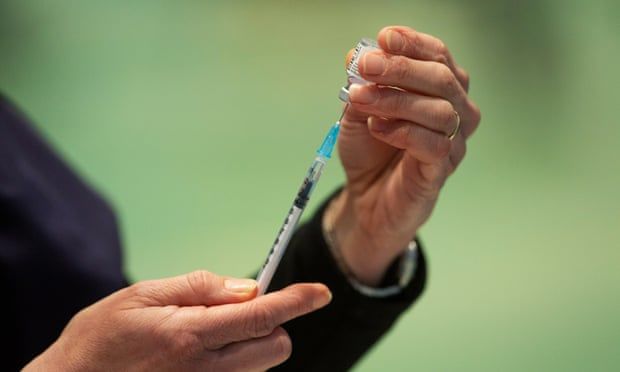 Sage says majority were likely infected shortly before or soon after jab, before immunity had time to develop

One in 25 people hospitalised with Covid-19 since December have had at least one dose of vaccine, with the majority infected shortly before or soon after vaccination – before immunity would have had time to develop.

However, few of those who developed symptoms, did so more than 2 weeks after receiving a first dose – indicating that the vaccines do help to prevent serious disease once they’ve had time to take effect.

The data, presented to the government’s Scientific Advisory Group for Emergencies (Sage), could be a further indication that people are dropping their guard once they’ve received a jab, wrongly assuming that they are immediately protected.

Alternative explanations include the possibility that they were infected shortly before vaccination, during the vaccine appointment itself, or that vaccination triggered symptoms in infected people who were previously asymptomatic.

In minutes from its 83rd meeting on 11 March Sage said:“The observation that a significant number of people developing symptoms within a few days of a first dose may suggest some behaviour change following vaccination. It is important therefore that communications around vaccination reinforce the need for safe behaviours to be maintained.”

Almost 29 million people in the UK have received at least one dose of a coronavirus vaccine so far, with some degree of immune protection thought to develop around two weeks after receiving the first jab – although a second dose is needed to achieve the highest levels of protection.

According to data submitted to Sage by the Covid-19 Clinical Information Network (CO-CIN), there were 1,802 recorded cases of vaccinated patients hospitalised with Covid-19 in the UK as of 5 March. This accounted for 4.2% (1,802/42,788) of all Covid-related hospital admissions since 8 December – the date when the first people in the UK were vaccinated.

The median time between vaccination and symptom onset for these patients was five days, indicating that most of them were infected shortly before or around the time of vaccination, with the remainder infected after vaccination but before immunity had developed.

“Elderly and vulnerable people who had been shielding, may have inadvertently been exposed and infected either through the end-to-end process of vaccination, or shortly after vaccination through behavioural changes where they wrongly assume they are immune,” the CO-CIN report said.

Data from previous vaccine rollouts, national surveys and evidence from Israel have also indicated that people may be less likely to abide by social distancing rules once they’ve been vaccinated.

In its 11 March meeting, Sage emphasised the need for better government communication about how long it takes for the jab to work, and that although the Covid-19 vaccines in use in the UK are highly effective, no vaccine is 100% effective. Minutes from the meeting said: “Some people will be hospitalised with Covid-19 even after completing their full vaccination schedule. It will be particularly important to monitor the prevalence of different variants present in this group by sequencing to understand any potential immune escape. This is under way by Public Health England.”

A separate document released by Sage on Friday suggested there has been a four-fold increase in confirmed cases of the Brazilian P1 variant during the fortnight of 10 March to 24 March from 5 to 21, while cases of the South African variant have increased from 190 to 305.
#covid 19  #vaccine  #covid  #coronavirus  #vaccines
Add Comment