Migrant rights advocates in Canada have renewed their push for Prime Minister Justin Trudeau‘s government to grant permanent residency to all foreign workers, students and other undocumented people in the country when parliament resumes next week.

Speaking to reporters on Wednesday during a virtual news briefing, undocumented worker and rights activist Danilo De Leon said he and others without status “cannot wait” any longer.

“My daughters are the reason I continue to sacrifice, being far from them and fighting for my status. I want to be reunited with them in Canada so they will have a better future … We cannot wait, make status for all a priority now. No one should be excluded,” said De Leon.

Organised by the Migrant Rights Network, the news conference comes just days before rallies will be held across Canada to demand permanent status for all – a call that has been gaining momentum among civil rights activists for months.

While regularising the immigration status of workers and others without permanent status has been a long-standing demand, it gained increased urgency as the COVID-19 pandemic highlighted systemic problems in several industries employing these labourers.

Rights groups estimate that more than one million migrant workers, students, refugees and others are in Canada without permanent immigration status, while hundreds of thousands of others are undocumented. 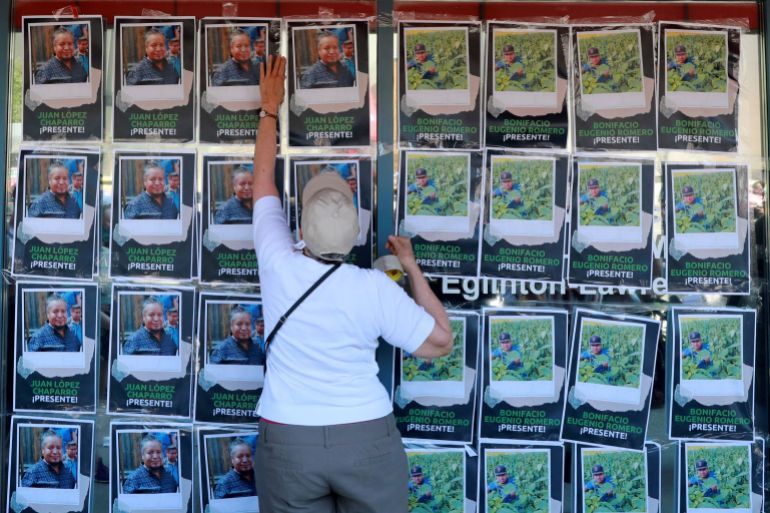 Supporters tape up photos of migrant workers Juan Lopez Chaparro and Bonifacio Eugenio-Romero, who died from COVID-19, during a protest in Toronto in 2020

Many work as domestic caregivers, in healthcare or custodial jobs, or in Canada’s highly profitable agricultural and food processing sector. And activists say a system that ties many of these workers to their Canadian employers leaves them vulnerable to abuse and with little recourse to defend their rights because the threat of removal hangs over their hands.

“These migrants often hold poorly paid, precarious jobs with little or no social protection. [They] find themselves at the mercy of placement agencies, which too often place them in situations of exploitation,” Amnesty International Canada said in a report (PDF) on Wednesday. “Their rights as employees are generally not respected, but they don’t dare denounce the situation because of the precariousness of their status.”

Last month, Jamaican farmworkers brought to Canada under a special, temporary migration programme said in an open letter that they are “treated like mules”, and verbally abused and threatened by their bosses. “As it currently stands, [the Seasonal Agricultural Worker Program] is systematic slavery,” they said.

Jamaica has since said it plans to send a special, fact-finding team to Canada to investigate the workers’ claims.

The Canadian government has said it is looking into pathways to permanent residence for foreign workers and international students.

The office of Canada’s Minister of Employment Carla Qualtrough also told Al Jazeera in an email last month that the government in 2021 set aside $38.1m ($49.5m Canadian) over three years to boost support for migrant workers.

“In the last year, we have strengthened the workplace inspection process, expanded the TFW [temporary foreign worker] tip line to provide services in multiple languages, and are increasing support for migrant worker organizations,” it said, among other measures.

In 2020, Ottawa also announced a regularisation programme for so-called “guardian angels” – temporary workers who were on the front lines of Canada’s coronavirus response, including those who worked in hard-hit elderly care facilities at the height of the pandemic.

But advocates say that measure did not go far enough, and they argue permanent status for all is the best way to help all workers defend their rights and access services.

Temporary migrants can lose their status for many reasons, including “if they leave a job for any reason such as unpaid wages, sexual harassment, or unsafe working conditions”, sociology professors Luin Goldring and Patricia Landolt at York University and the University of Toronto, respectively, wrote last year in The Conversation.

“Status for all centres human rights, mobility rights and decent work — for all temporary migrants with precarious legal status and their families, not just workers in some sectors or occupations,” they said.

Hundreds of civil society groups have endorsed the call for status for all (PDF), while the editorial board of the Toronto Star, Canada’s largest newspaper, also recently urged the government “to take a generous approach and avoid arbitrary limits on who could apply” for permanent status.

“Given the perils they face, these residents are exactly the sort of people governments should be seeking to protect,” the board wrote last week.

On Sunday, just days before Canada’s parliament resumes in Ottawa, rallies will be held in Toronto, Montreal, Vancouver and several other cities across the country to demand permanent status for all.

Organisers say they hope public pressure will get the government to act now.

He pointed to Ireland, which in early 2022 launched a regularisation programme for undocumented migrants who have lived in the country for at least two years, as one recent positive example that Canada should follow.

“Prime Minister Trudeau has shown that he is ready to do the right thing,” Hussan said. “We are all here to insist that absolutely each and every undocumented person should be included – no one left behind.”