Malaysia’s tightly contested general election has ended in a hung parliament, with the coalition led by opposition leader Anwar Ibrahim winning the most seats followed by a grouping including the country’s Islamist party a few seats behind.

Anwar’s Pakatan Harapan (PH) coalition secured 82 seats in the 222-member parliament while former Prime Minister Muhyiddin Yassin’s Malay-based Perikatan Nasional (PN) trailed behind with 73 seats, the Election Commission of Malaysia said early on Sunday morning. Voting was suspended in one seat in the Borneo state of Sarawak after flooding made it impossible for elections workers and voters to get to some polling stations.

Anwar and Muhyiddin each claimed their coalitions had enough support to form the government, although they did not reveal which parties they had allied with. Key to the formation of any government will be the Borneo states of Sabah and Sarawak, which have long sought greater influence at the federal level.

Coalition talks were continuing on Sunday.

Malaysia’s political landscape has become increasingly fractured in recent years. PH’s historic win in 2018 triggered political infighting among ethnic Malay parties that played on concerns about race and religion in a country that is mostly Malay Muslim but has significant communities of Indigenous people and those of Chinese and Indian origin.

PH fell to a power grab in February 2020 as the COVID-19 pandemic emerged, and the country has had three prime ministers in as many years.

Many of the former PH politicians who helped engineer that collapse were soundly punished at the ballot box, with one even losing her deposit.

Also losing his deposit was veteran former Prime Minister Mahathir Mohamad, who at 97 had set up another Malay-based party in the wake of PH’s collapse. Mahathir came in fourth in a five-way fight on the resort island of Langkawi, the election commission said. It was a shock defeat for someone who had led Malaysia for some 22 years until 2003, and was once revered for his role in turning Malaysia into an export giant.

Muhyiddin’s PN made gains thanks to a surge in support for PAS, an Islamist party that expanded further across northern and central Malaysia from its traditional strongholds. 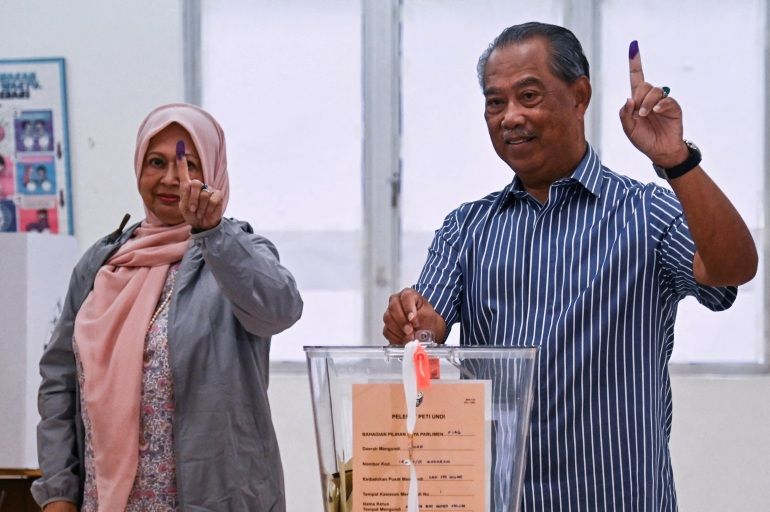 Muhyiddin’s new National Alliance, which includes a Malay-centric conservative party and an Islamist party, made substantial gains
PN was a junior partner in Ismail’s coalition government, and there was speculation that the two could come together again to block Anwar.

Anwar said he would submit a letter to Malaysia’s King Al-Sultan Abdullah detailing his support. If he clinches the top job, it would mark a remarkable comeback for a politician who was Mahathir’s deputy and heir apparent before he was suddenly sacked and accused of sodomy at the height of the Asian financial crisis in 1998. He has been jailed twice on sodomy charges, but his political fall and rise helped fuel Malaysia’s reform movement and break BN’s political dominance. 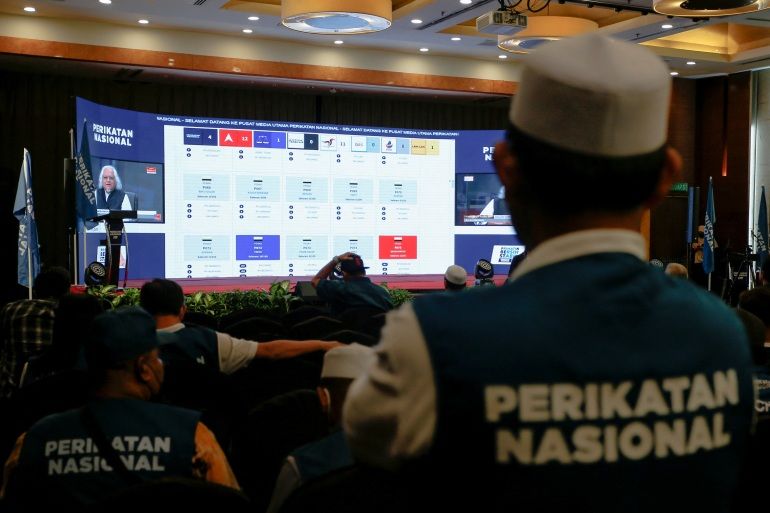 Reporting from outside Kuala Lumpur, Al Jazeera’s Florence Looi said the results were similar to what opinion polls had predicted, with no single party or coalition having a clear majority.

“There is not one party that has enough seats to form a government on their own. Now this means the smaller parties will be in a position to play kingmaker and I expect negotiations and horse trading would have already started behind closed doors.”

Ismail Sabri’s BN alliance said it accepted the people’s decision but stopped short of conceding defeat, saying in a statement it remains committed to forming a stable government.

There were calls from some in UMNO for the resignation of Ahmad Zahid Hamidi, the party’s president who is widely thought to have pressured Ismail Sabri, one of the party’s three vice presidents, into holding the election.

Turnout was 73.89 percent, the Elections Commission said on Sunday.

Voter turnout in 2018 was one of the highest at 82 percent, but the pool of voters in this year’s election was larger as a result of automatic voter registration and the reduction in the voting age to 18.