Amanda Pritchard told the BBC that the ongoing industrial action is "clearly having an impact".

But she suggested that all sides are "looking to try to reach a resolution".

Nurses in England walked out this week and ambulance staff in England, Wales and Northern Ireland are planning more strike days in February and March.

During strikes at the end of last year and earlier this month, ambulance staff provided emergency cover but routine care has been affected.

And this week, thousands of NHS operations and appointments had to be cancelled because of the nurses' strikes in England.

Over the two days of action, NHS England said 27,800 bookings had to be rescheduled, including 5,000 operations and treatments.

Speaking on BBC Radio 4's Today programme, Ms Pritchard said: "As the strike action is extended over long periods of time, and as those dates start coming closer together, it does get more challenging, there is absolutely no doubt.

"It is clearly having an impact. I think that's obvious."

She added: "My sense is that everybody is looking to try and reach a resolution."

Matthew Taylor, head of the NHS Confederation - which represents health service organisations - said both ministers and trade unions needed to be "pragmatic" and "willing to compromise".

He told BBC News: "We simply need to say that if the government doesn't take a step, doesn't open negotiations, then it will be very difficult for us to break out of this vicious cycle of trying to meet demand at the same time as trying to make a recovery."

Asked if she believed the NHS would ever return to its pre-Covid "normal", Ms Pritchard replied: "I don't think there is a normal for the NHS.

"It's always been adapting and changing over the last 74 years."

Ms Pritchard thinks there is a "once in a generation opportunity" with a new workforce plan being drawn up by NHS England. Too many people with a passion for the health service being turned away because of limits on courses and training places, she said.

There should be more medical and nurses apprenticeships offering the chance to "earn while you learn", and this would allow more people to change career and join the NHS, she added.

Ms Pritchard said her hope was that booking appointments via the NHS app would become as easy as "ordering an uber" and it would be "crucial" to the health service's development.

Prevention was also a key focus for the future, she said, with early diagnosis and treatment boosted by community pharmacies carrying out blood tests and cancer referrals, already being piloted across England.

Ms Pritchard also said the NHS had been up front about wanting to use the private sector as part of its recovery plan.

It was not, she told the BBC, a case of taking money from the NHS to give to the private sector but about offering patients faster access at the same cost to the NHS.

When the private sector is paid to do operations such as hip and knee replacements - it generally costs the NHS the same as if it were done in an NHS hospital.

"We're doing it on a fair playing field. It's got to be good for patients, and therefore it's something we're keen to continue to do," said Ms Pritchard.

It comes as former health secretary Sajid Javid told the Times patients should be charged for GP appointments and A&E visits, as he called the present model of the NHS "unsustainable".

Elsewhere in the wide-ranging BBC interview, Ms Pritchard was asked about the Food Standards Agency chairwoman comparing cake in the office to passive smoking.

She replied: "I absolutely 100% allow cake in my office. I would say, of course, as part of a balanced diet where we're all being very sensible about what we eat and how we eat it, cake for me forms an essential part." 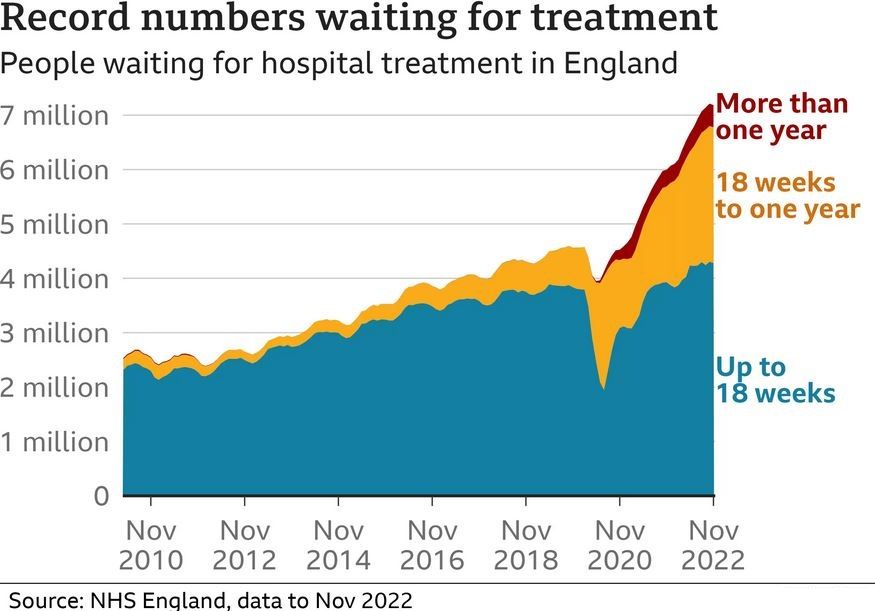