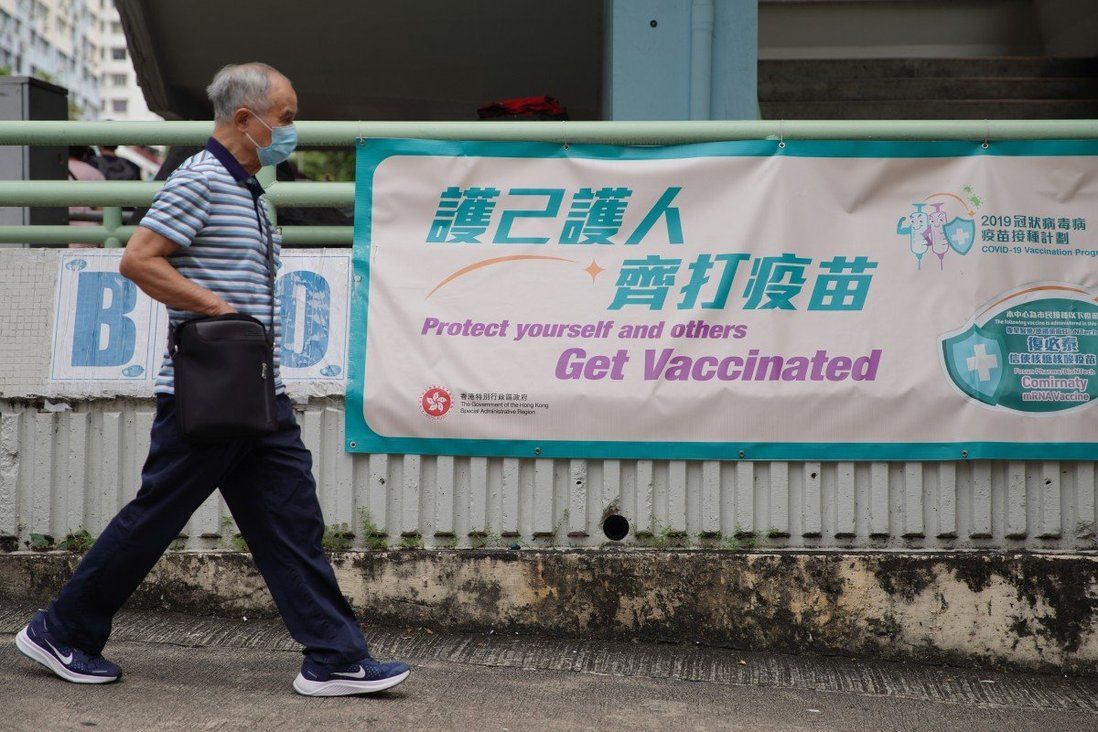 Residents will not receive jabs if they or their families object, and those deemed medically unfit are exempt, but otherwise vaccinations will proceed, government says.

Residents of Hong Kong care homes will be automatically scheduled for Covid-19 jabs under a government plan to boost sluggish vaccination rates among the elderly.

They would not receive the shots if they or their families objected, while the medically unfit are exempt, but the vaccinations would otherwise go ahead, the government revealed on Thursday.

Doctors will assess each resident on their suitability for the Sinovac jab. The family will then be notified of the plan to administer the shot, which will go ahead if no objections have been raised within two weeks.

The government on Wednesday launched a pilot scheme at 10 care homes, involving notices sent to families that state: “If the family members have not returned the reply slip by the specific date, visiting doctors will vaccinate the elderly resident with the Sinovac vaccine to protect them.”

The reply slip, seen by the Post, offers relatives the options of agreeing or objecting to the vaccination.

A health warning is placed alongside the latter stating the higher risks of contracting Covid-19 for people who are unvaccinated. Family members must state their reasons for objecting.

In a reply to the Post, the Social Welfare Department said the requirement for relatives to list their objections was designed to avoid any future disputes, but added that vaccination would not proceed even without the reasons being stated.

For those residents whose relatives did not reply in time, vaccination would go ahead once the individual’s consent had been obtained, the department added.

As of Monday, about 15 per cent of care home residents had been vaccinated with at least one dose. The figure for the care home workforce is more than 90 per cent.

Vaccination rates among Hong Kong’s elderly, who are more susceptible to Covid-19, are among the lowest in the city. 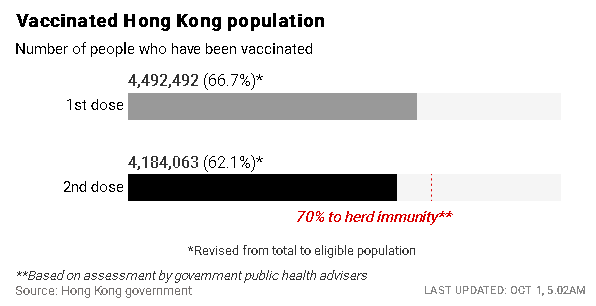 Just 40.3 per cent of people in their 70s have received at least one vaccine dose, falling to 14.6 per cent for those aged 80 or above. The overall rate for the city’s 7.5 million population is roughly 60 per cent.

Elderly Commission chairman Dr Lam Ching-choi said experts from the Centre for Health Protection’s joint scientific committees and the Geriatrics Society had already made clear that Covid-19 vaccination was suitable for the elderly, unless they suffered from acute illnesses.

“Family members often focus on the side effects of vaccines, but forget that when there is an outbreak in a care home, the impact on their loved ones could be very big,” Lam said.

“If family members object [to the vaccination], they just need to clearly express their wishes and no vaccination will be done. This isn’t a matter of exerting pressure.”

Lam said he believed the pilot scheme would help lift the vaccination rate, with doctors dispatched to facilities to understand the individual circumstances of each resident.

He added that doctors would consider a patient’s best interests when deciding whether to proceed with vaccination if they did not have any relatives or in the absence of a response.

Grace Li Fai, who runs a Yuen Long care home that is part of the pilot, said that 74 per cent of the some 145 residents in her facility had not been vaccinated.

Their names would be passed to doctors, who would then assess whether to vaccinate based on their medical history.

Those with concerns over the safety of the jabs could consult doctors in face-to-face sessions, Li said. Elderly residents who are mentally capable can also decide for themselves whether to get the jab.

When asked whether there would be a grey area in defining liability if clear consent had not been obtained for vaccination, she said: “We are responsible to protect the safety of the elderly ... we are not going to worry about the issue of liability.”

“The patient or carer does not only need to indicate consent, but doctors would also need to explain the pros and cons of a procedure, and the patient is made known that there is an option not to take the procedure,” Lam said.

Two cases arrived from France and another was from Pakistan. About five people tested preliminary-positive.

The Advisory Panel on Covid-19 Vaccines on Thursday also held its regular meeting, looking into the latest worldwide data on the two vaccines being used in Hong Kong.

The government has changed the definition of a fully vaccinated person for children aged 12 to 17 to someone who has received one dose of the BioNTech vaccine. It remains two shots for the rest of the population.

The recommendation was first made by the joint scientific committees around two weeks ago.

A source familiar with the panel’s operations said that applications on lowering the vaccination age of the Sinovac and BioNTech jabs had not been received yet.