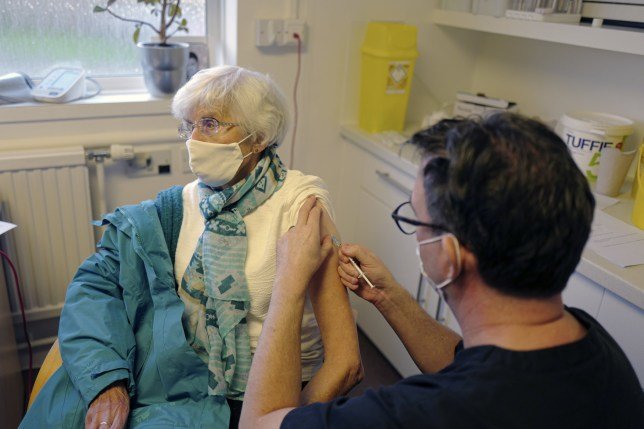 Over 500,000 people in the UK have now had their first dose of a vaccine against coronavirus, Boris Johnson said.

The Prime Minister told a Downing Street press conference that the roll-out of the vaccine was well underway since grandmother Margaret Keenan became the first patient in the world to receive the Pfizer Covid-19 jab on December 8.

It is delivered in two doses, at least 21 days apart.

The news comes as an expert warned vaccination alone will not be enough to bring coronavirus in the community down to ‘very low levels’ for some time, and social restrictions may have to continue until around 50% of the population has been vaccinated.

Many people have been hoping for a return to normality once the elderly and those most at risk from Covid-19 have received the jab.

But scientists say this might not be enough to see an end to measures such as social distancing and wearing face masks.

They suggest restrictions may be needed until at least half of the UK’s population has been vaccinated.

Stephen Evans, professor of pharmacoepidemiology at the London School of Hygiene and Tropical Medicine, said: ‘We actually need to have the absolute amount of virus circulating to be very low.

‘And we won’t do that by vaccination alone until we’re getting 50% of the population vaccinated or more, and that’s going to be quite a bit of a long way off yet.

‘So I fear that the sort of restrictions we have, the non-medical interventions, are going to need to be carried on.’

Prof Evans added: ‘I think if people take these seriously, then it’s possible for various economic activities to go ahead, but you have to make sure that you are keeping to the non-medical interventions, being aware and behaving as if every person you contact has got the virus.

‘And that you have it as well.

‘And when you behave in a way that realises that, and that the consequences for either you or the person around you getting the virus can be very serious, then it changes people’s behaviour.

‘And we’re going to have to go on doing that for quite a long time.’

Adam Finn, professor of paediatrics at the University of Bristol, also said that even if the elderly are vaccinated, social restrictions may have to continue for some time.

He explained: ‘I think the modelling is very clear that, even if you had high coverage and high levels of protection in the high-risk groups, you would still see epidemics, and large numbers of hospitalisations and deaths if you relax the measures before you have a broader control of viral circulation in the population at large.

‘So I think the idea that you can immunise a large proportion of the elderly and then kind of go back to normal is misguided.

‘I think that none of the models suggest that that’s going to be possible.’

Peter Openshaw, professor of experimental medicine at Imperial College London, explained that as well as the elderly, there has to be concern about the effects of long Covid in relatively young people.

Prof Openshaw added: ‘We shouldn’t stop vaccinating once we have just vaccinated the high risk.

‘I think we have to get the population vaccinated and I think the prospects of vaccines preventing long Covid are quite good.’

The experts said it is not yet possible to say how much of the population needs to be vaccinated to achieve herd immunity.

They explained that, while there is insufficient evidence on how effective the vaccines are at reducing transmission, the Pfizer-BioNTech and Moderna jabs have demonstrated such high efficacy, it would be surprising if there was no impact on transmission.

Prof Openshaw said his concern was the hard to reach in the community, people who are very doubtful about vaccines or those not very well informed.

He said this is something that needs to be focused on.

He added that the efficacy of the Oxford-AstraZeneca vaccine, which is yet to receive regulatory approval, against transmission may be ‘considerable’ even if it is not as effective as the other options.

There have been some concerns the Oxford vaccine may not be as good as preventing symptomatic disease as the others, but the experts suggested it would be adequate for very strong population-wide effects if widely deployed.