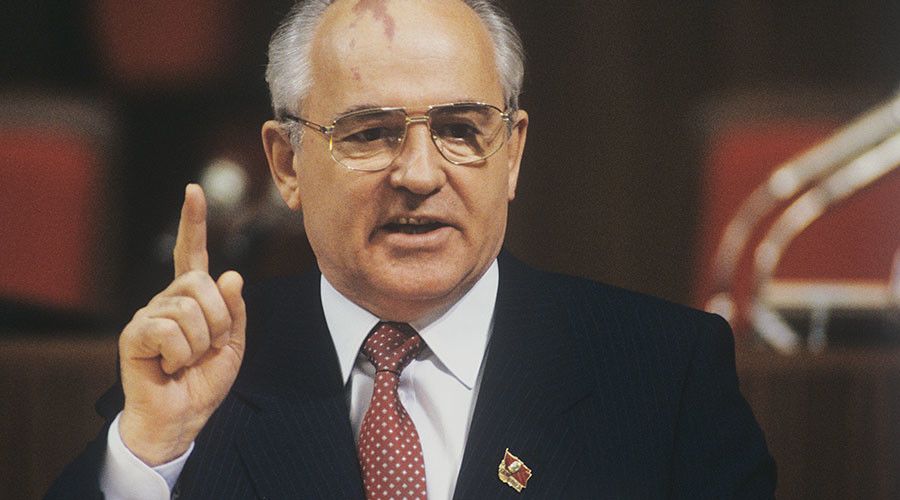 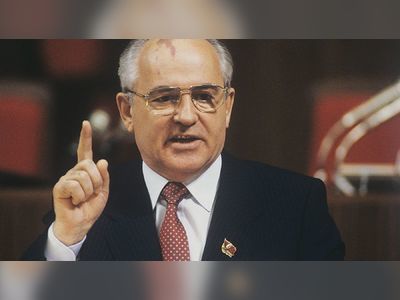 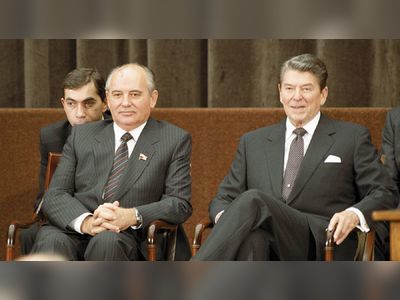 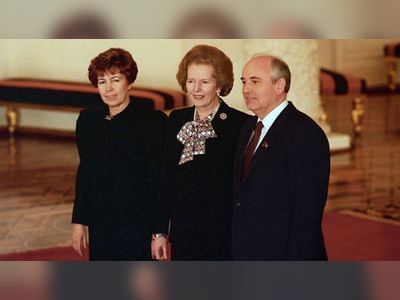 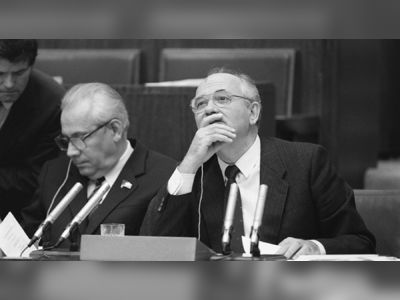 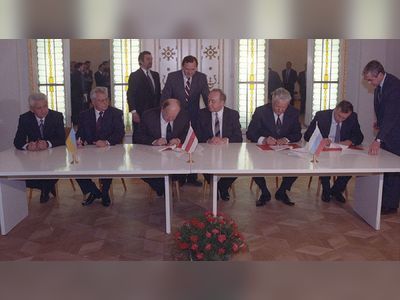 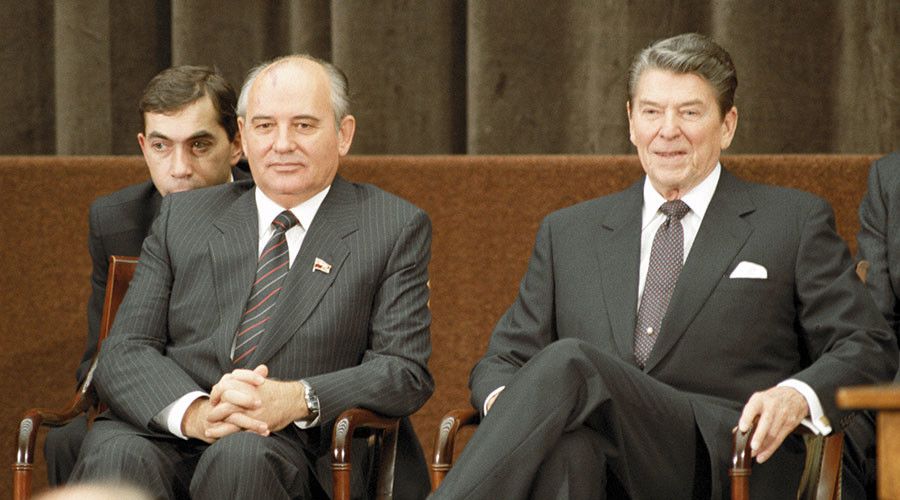 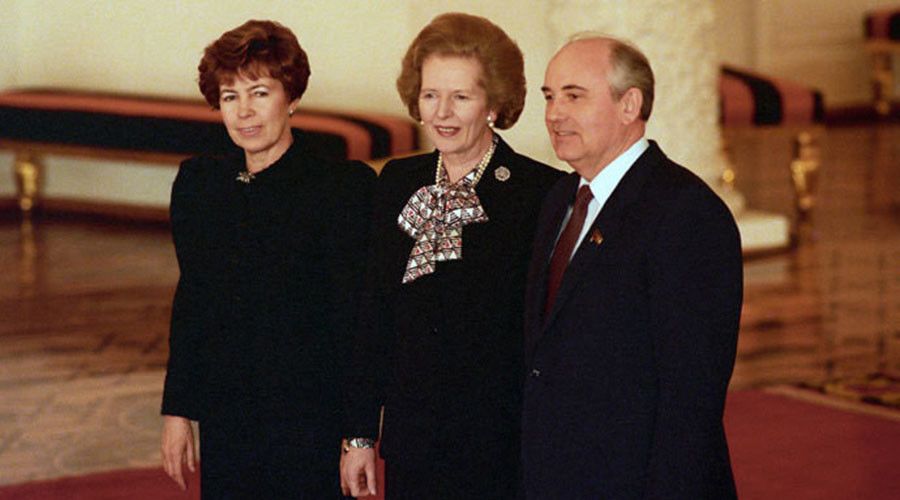 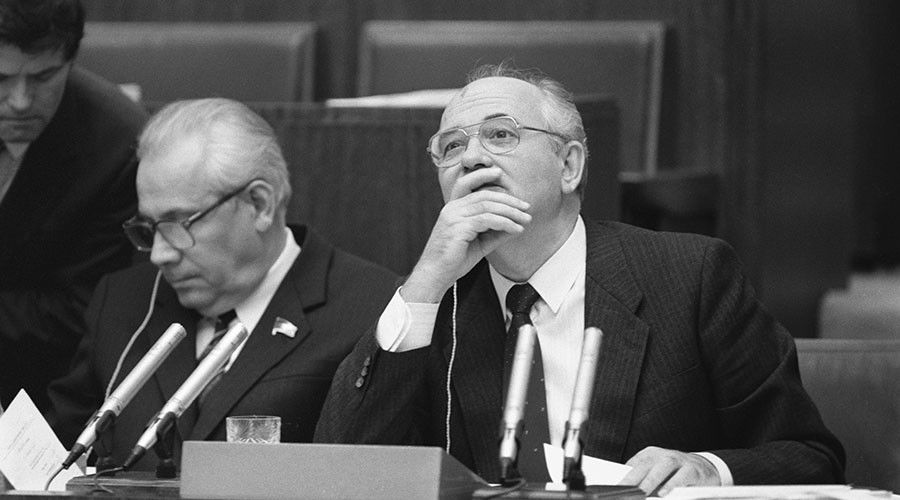 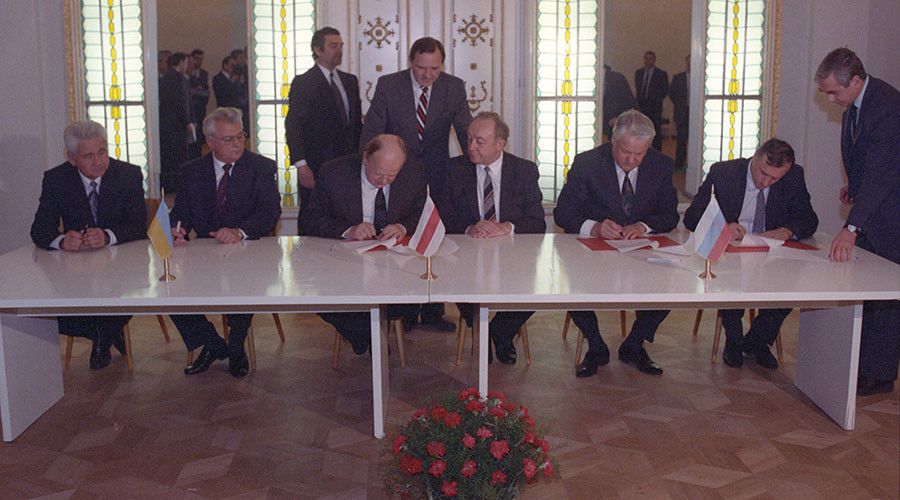 Mikhail Gorbachev, the first and only president of the Soviet Union, has died at the age of 91, in Moscow.

His death was reported on Tuesday night by the Central Clinical Hospital, which said in a statement that “Mikhail Sergeyevich Gorbachev died this evening after a serious and prolonged illness.”

Gorbachev was hospitalized at the very beginning of the Covid-19 pandemic, at the request of his doctors, and had been under medical supervision ever since.

A divisive figure, supporters credit him with having played a key part in bringing about an end to the Cold War, while opponents accuse him of aiding in the fall of the Soviet Union and a major loss to Moscow’s prestige and global influence.


Born in 1931 into a peasant family in southern Russia, in his teens Gorbachev operated combine harvesters on collective farms. His party career started early in his student years, when he studied law at Lomonosov Moscow State University.

His ascent through the ranks was relatively rapid, and in 1985 he became the general secretary of the Central Committee of the Communist Party of the Soviet Union, making him the highest ranking official in the USSR.

During his time in office, Gorbachev aimed to re-energize the stalled Soviet economy, which was riddled with inefficiency, overblown defense spending and creeping corruption. He called for urgent reorganization and modernization, but soon expanded his reform to the political and social structure of the whole nation.

The policy of ‘perestroika’ was announced in 1986 as an attempt to reorganize the economy. More of a political movement, the “restructuring” aimed to give more independence to ministries and large state-owned enterprises. It also introduced some free market-style reforms. In 1988, Gorbachev permitted establishing private enterprises in the country for the first time since Vladimir Lenin’s “New Economic Policy” of the 1920s.

Another policy proclaimed was ‘glasnost'. Gorbachev aimed to bring transparency into society, ease the Communist Party’s control over the media and release political prisoners. This was a radical change, since control over public speech had previously been an essential part of the Soviet regime.

Gorbachev also proposed a constitutional change to move to a presidential system and created a new political body called the Congress of People’s Deputies. The 2,250 members were elected in the Soviet Union’s first semi-competitive parliamentary election. On March 15, 1990, following a vote in the Congress of People’s Deputies, Mikhail Gorbachev became president of the USSR.


Gorbachev’s foreign policy, also known as the “new thinking,” marked a period of significant improvement of relations between the Soviet Union and Western countries, replacing the era of Cold War hostilities.

In 1986, he announced plans to withdraw Soviet troops from Afghanistan, but it took three more years to complete the pullout.

The Soviet-Afghan war was a major point of criticism for the West. It also cost the Soviet Union at least 15,000 casualties, put additional strains on an already creaking bureaucratic planned economy and filled the country with veterans suffering from combat stress disorders.

The reengagement with the West paved the way for several key disarmament treaties to be signed. Moscow and Washington agreed to dismantle their intermediate-range conventional and nuclear missiles – the very precise weapons that could tempt the military into using nuclear weapons on a limited scale, but still trigger global mutual annihilation. Under Gorbachev, Moscow unilaterally stopped all nuclear tests.

Moscow’s relations with the Eastern Bloc countries also underwent a radical change. Earlier, Soviet troops always served as the final argument, should one of the countries of the Cold War-era Warsaw Pact try to shift its allegiance. But Gorbachev’s liberalization included the right of self-determination for those nations. This was jokingly called the “Sinatra doctrine” after the singer Frank Sinatra, alluding to his song, 'My Way', as countries were allowed to determine their own internal policies. A string of revolutions in 1989 ousted European Communist regimes, and in 1990 West and East Germany reunified as one country.

For his efforts in easing international tensions, Gorbachev was awarded the Nobel Peace Prize in 1990.

In a statement accompanying the award, the Nobel Committee said that the president of the Soviet Union had played a “leading role” in the international peace process.

Fall of the Berlin Wall


Gorbachev is also well-known for having played a key role in the fall of the Berlin Wall, the symbol of a split Europe and divided world in the times of the Cold War.

After the fall of the Nazi regime as a result of World War II, Germany had become two separate countries by 1949. The Federal Republic of Germany (or West Germany) was run by the Western Allies, while the German Democratic Republic (East Germany) was controlled by the Soviet Union. Berlin was located inside East Germany, but it was shared by both West and East Germany, with the Berlin Wall dividing the territories of the two states.

Built in 1961, the wall separated families and loved ones for 28 years. It was eventually toppled on the night of November 9, 1989. During a visit to West Germany earlier in 1989, the Soviet leader declared that every nation can “freely choose its own political and social system” and that Moscow would “respect for the right of all peoples to self-determination.”

The fall of the Berlin Wall marked the dawn of a new age – the end of the Cold War and the bipolar world – and it paved the way for Germany’s reunification in 1990.

Collapse of the Soviet Union


The partial democratization of Soviet society under Gorbachev led to a surge in nationalist and anti-Russian sentiment in most of the 15 Soviet republics. But this drive for independence was not always peaceful. On several occasions, Moscow ordered the use of force against violent riots, as the nationalist course in certain regions was seen as capable of spawning much greater violence in the future if the government failed to act. However, the use of force only caused bigger protests.

The frozen conflicts in ethnic enclaves around the country, such as Nagorno-Karabakh and Trans-Dniester, as well as the 2008 war in South Ossetia, are the legacies of those events.

The coup failed, but it prompted Gorbachev to dissolve the Central Committee of the Communist Party of the Soviet Union and to resign as the party’s General Secretary, as well as to dissolve all party departments within the governmental structures, thus effectively ending Communist rule in the USSR and eliminating its primary unifying political force.

The Soviet Union collapsed with dramatic speed during the latter part of 1991, as one Soviet republic after another declared independence. In December 1991, the presidents of Russia, Ukraine, and Belarus met near the Belorussian town of Brest and signed the Belavezha Accords, which formally declared the Soviet Union effectively dissolved and established the Commonwealth of Independent States (CIS) in its place.

Gorbachev initially denounced the move as illegal, but later in the same month acknowledged it and announced his resignation as president.


Gorbachev’s policies made him popular in the West, but in his own country he remains a controversial figure to this day. He is praised by many for his disarmament initiatives, the unification of Germany, instigating the fall of the Iron Curtain and ending the Cold War, as well as for granting Eastern European countries the right to self-determination.

However, the former Soviet leader also faced significant criticism, mostly at home, from those who believe that his policies weakened the Soviet Union and its successor, Russia, and were the major cause of the collapse of the USSR.

Some critics particularly say that, by moving forward with his disarmament initiatives, including the unilateral ones, he undermined the military and industrial might of the Soviet Union, while others accuse him of failing to prevent NATO from expanding further eastwards and eventually reaching Russia’s borders.

After his resignation, Gorbachev created the International Non-Governmental Foundation for Socio-Economic and Political Studies (The Gorbachev Foundation), which is both a research center and discussion platform, as well as an NGO overseeing humanitarian charity projects.

In 1993, at the initiative of the representatives of 108 countries, Gorbachev established Green Cross International, a non-governmental environmental organization, which now has offices in 23 countries around the world.

In 1999, he also became one of the initiators of the Nobel Peace Laureates Summit, which meets every year to discuss global threats, such as violence and wars, poverty, crisis situations in the world’s economy, and the environment, according to the Gorbachev Foundation website.

Between 2001 and 2009, Gorbachev also co-chaired the St. Petersburg Dialogue, an annual Russian-German forum held alternately in both countries and attended by politicians, entrepreneurs, and young people.

The former Soviet leader had also visited around 50 countries since 1992 and been given more than 300 awards, diplomas, certificates of honor, and honorable distinctions, according to the Gorbachev Foundation.

Gorbachev also wrote dozens of books, which have been published in 10 languages.

“I was doing my best in bringing together morality and responsibility to people. It’s a matter of principle for me. It was high time to put an end to the rulers’ wild cravings and to their highhandedness. There were a few things I have not succeeded in, but I don’t think I was wrong in my approach,” he wrote in his political article of faith, published by the Gorbachev Foundation.

Gorbachev will be buried in Moscow’s Novodevichy Cemetery next to his wife, Raisa, who died in 1999, Tass revealed, citing a source familiar with the family’s wishes. 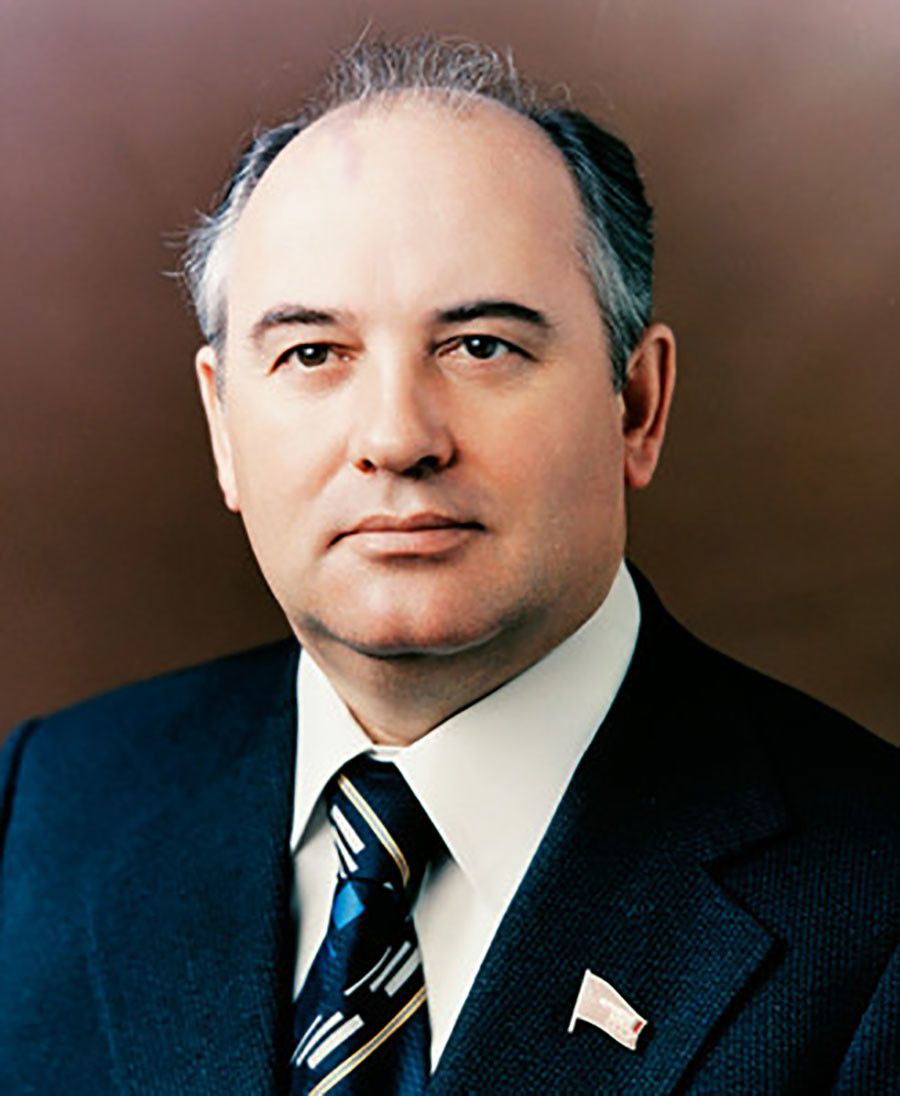