Hong Kong’s wing chun masters are using virtual reality (VR) technology to showcase their half-century-old legendary headquarters for the first time, in a bid to modernise the age-old martial art and stay connected with overseas devotees.

The VR headsets, provided as part of an exhibition curated by Hong Kong Shue Yan University, put visitors in the middle of the members-only historical headquarters commissioned by the late grandmaster Ip Man to experience how he and his top followers use their fighting skills to strike a muk yan jong, a wooden practice dummy.

“It’s an exhilarating experience. There are sounds coming from the wooden dummy with every flick of the console. I’d say it’s a very realistic experience for what it was,” said Lee Yuk-cheong, chairman of the Ving Tsun Athletic Association.

The virtual tour of the 55-year-old site in Prince Edward, regarded by some as the locus of wing chun in Hong Kong, is a centrepiece of the exhibition titled “Shuttle through 50 years”, which opens from Wednesday until November 19 at the Shue Yan University Research Complex at Braemar Hill.

Wing chun, a traditional martial arts practice from southern China, came to Hong Kong with Ip in the 1950s as the maestro fled the country’s civil war. As Ip and his sons spread their craft in the city, his followers were tasked with establishing a formal organisation and procuring permanent premises.

The site located on Nullah Road opened in 1968, providing a place for practitioners to host classes and providing a space for members of the association to gather. 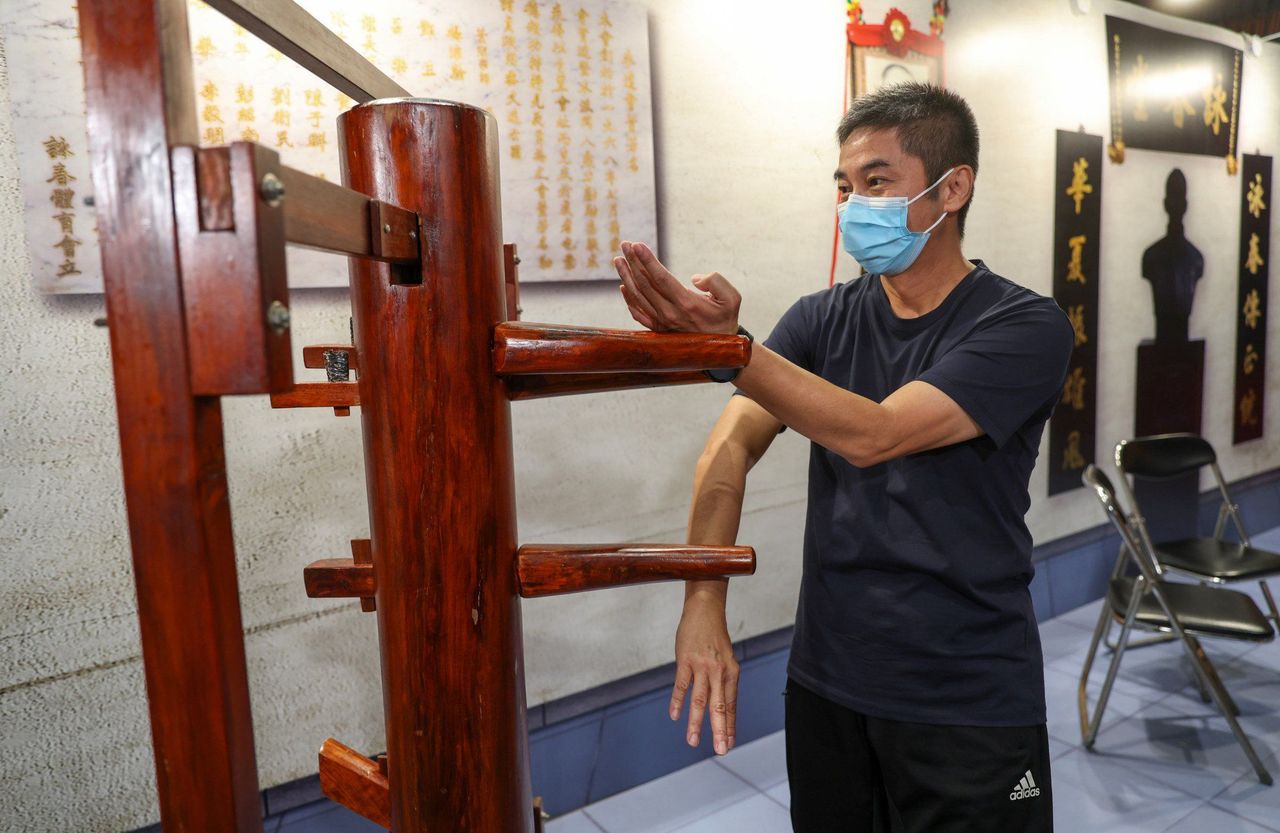 Ip Kong-chiu, a grandson of martial arts grandmaster Ip Man, shows techniques from wing chun.
Both the association and the university said they hoped the virtual exhibit would also help to promote the martial art, with the event to feature archival records such as newspaper clippings of followers’ performances and the minutes of a committee meeting which was halted due to the Ip’s death.

Visitors will also be able to catch a glimpse of how devoted practitioners and students from all walks of life have kept the art alive over the past decades, the organisers said.

“Ip Man was a visionary. He began thinking about how to promote Chinese martial arts fifty years ago … I think these records showed how they were willing to try new things [to keep the art going],” said Kaman Lee Ka-man, head of the university’s department of journalism and communications.

The association also previously organised online tournaments to stay connected with the wing chun community worldwide during the Covid-19 pandemic, as well as using an artificial intelligence program to attract youngsters’ interest in martial arts.

Lee said the competitions had attracted around 120 participants from more than 11 countries, including Singapore, the United Kingdom and Japan to contest in Taolu – or forms.

“At the beginning, we weren’t very optimistic about these [online activities]. I thought martial arts had to be conducted in person, but after trying it out, I think it has been very helpful for promotion as times have really changed,” said Ip Kong-chiu, a grandson of the organisation’s founder and himself a grandmaster.
#covid 19  #covid