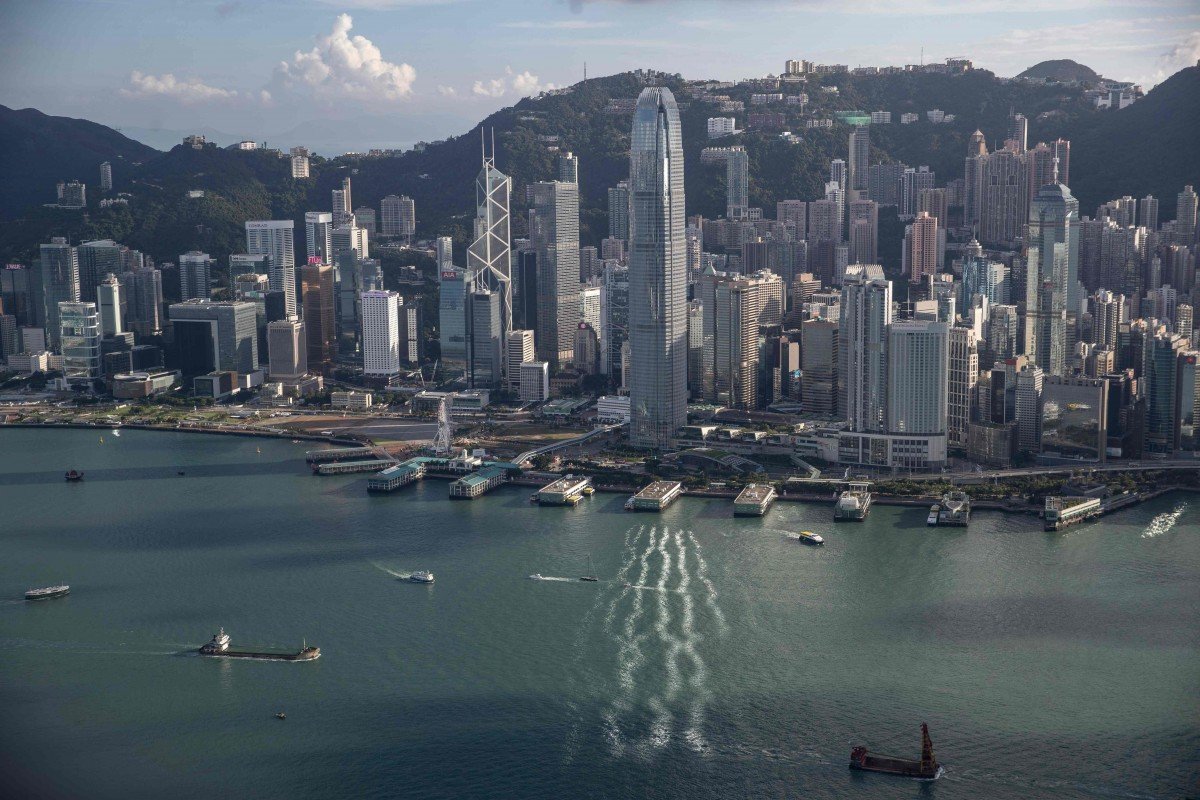 Mainland China’s return to growth will help the Hong Kong economy recover from its battering by the coronavirus, according to the city’s financial chief, who predicted a “significant improvement” to third-quarter performance and exports in September.

But achieving that progress depended on how well Hong Kong contained the spread of Covid-19, a fight that had already strained public resources, Financial Secretary Paul Chan Mo-po said.

Chan’s optimism follows a week in which the daily number of new cases stayed below 20, with just six infections emerging on Sunday, all but one imported. 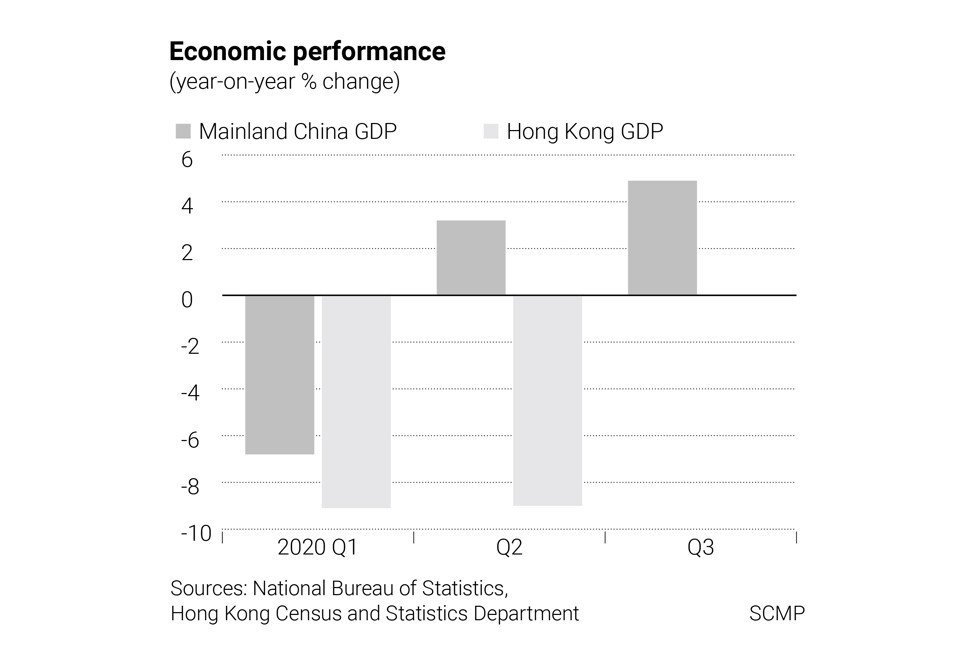 The mainland remains one of the few bright spots in a global economy ravaged by the health crisis. After it aggressively tackled the pandemic, gross domestic product grew 4.9 per cent in the third quarter compared with a year earlier, a recovery that followed a 6.8 per cent contraction in the first three months. Hong Kong now stood to benefit from that expansion, Chan predicted.

“Hong Kong’s economy has contracted for four quarters in a row,” he wrote on his blog. “We have yet to come out of this recession, but the drop in the third quarter should show significant improvement compared with the first two quarters. With the mainland’s economy regaining momentum and local consumption gradually improving, the pressure on our economy can be alleviated if the pandemic continues to remain under control.”

The city’s GDP shrank by 9.1 per cent in the first quarter and 9 per cent in the second, while the unemployment rate for the three months to September rose to its highest level in 16 years, hitting 6.4 per cent.

Exports, which were down 7.4 per cent in May year on year, had regained some lost ground, with August’s figure just 2.3 per cent lower than 12 months ago, he said, estimating September’s level should continue the trend. 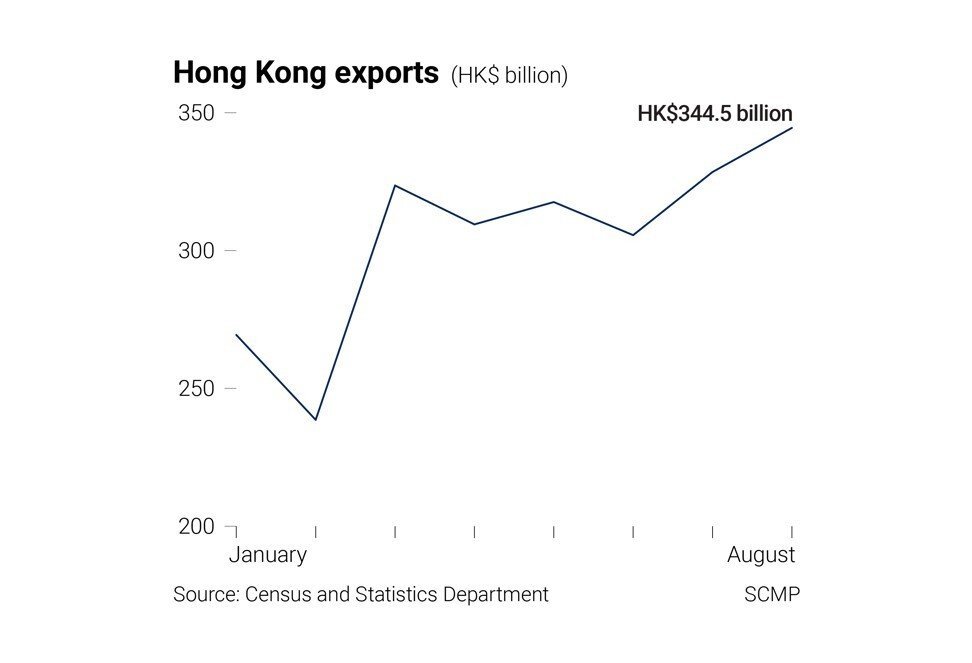 But the government has already spent more than HK$300 billion (US$38.7 billion) to help cushion the blow from the pandemic, and public resources were limited, Chan warned. One “necessary tool” to manage the spread of Covid-19 and get economic drivers moving again would be mandatory testing, he said.

The idea of forcing high-risk groups to undergo screening has triggered concern among some private doctors, who say their relationship to patients could be undermined by the requirement to alert authorities over any refusal.

The public needed to remain vigilant with the approach of winter and a possible fourth wave, Hong Kong Chief Executive Carrie Lam Cheng Yuet-ngor wrote in an article on her official website.

She noted that between September 25 and October 24, the city recorded 233 infections, with more than 60 per cent imported. But untraceable infections persisted, with several local cases emerging over the past two weeks, showing transmission chains had not been fully severed, Lam warned.

“One local case of unknown source is one case too many,” she wrote. 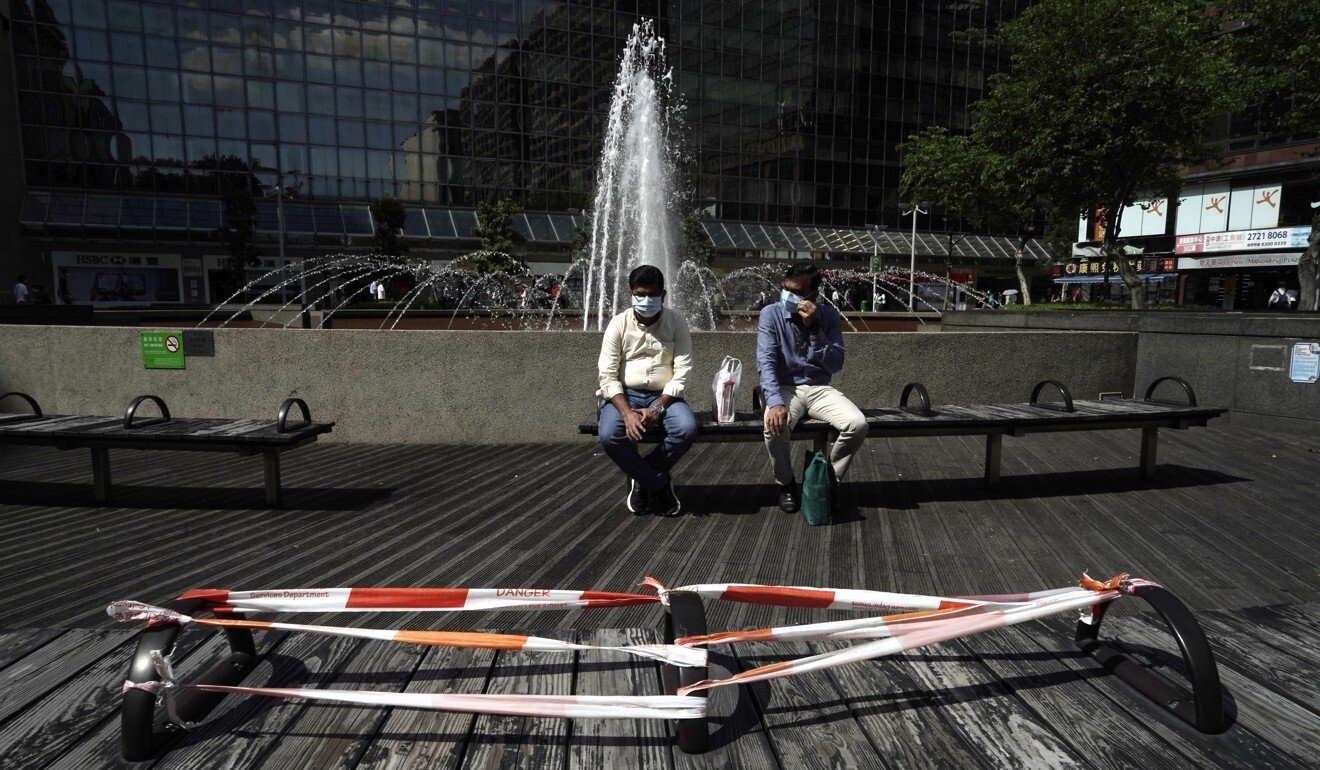 People wearing masks sit across from a bench that has been taped off to maintain social distancing in a Hong Kong park earlier this month.

Five of the latest cases involved arrivals from France, the United States, the Philippines, Pakistan and Ireland. The local untraceable case was a 42-year-old man who lives in Beverly Garden in Tseung Kwan O and is employed as a clerk at the Siu Ying Commercial Building in Sheung Wan. He developed a sore throat last Tuesday and was last at work on Wednesday. His details were first revealed on Saturday when he was still preliminary positive.

Lam also pledged to help companies battered by the pandemic. “The ongoing epidemic, which has lasted for nine months, has caused a global economic downturn, and many industries in Hong Kong have been hard hit,” she said. The government would “spare no effort to help businesses continue to operate” and do all it could to combat Covid-19, including providing free testing for targeted groups, such as residents in high-risk categories.

As the number of new cases falls, the city relaxed social-distancing rules further on Friday, allowing 30 people in local tour groups and as many as 50 at wedding ceremonies. The tourism industry expressed hope the government would allow up to 50 sightseers per group if current infection-control measures proved effective.

“We will liaise with the relevant government departments to understand what we can do to … protect tourists,” said Travel Industry Council chairman Jason Wong Chun-tat. “We are very willing to cooperate.”

The council had received more than 100 applications from tour groups to carry out sightseeing trips and more were expected after free, one-off testing for guides began this week, he said.

But local tourism could support travel agencies only for a short period of time, Wong warned.

“The industry has long awaited the opening of borders,” he said. “We’re hoping for more travel bubbles and for the health code system with Macau and the mainland to be set up. In the meantime, we hope local tours can give travel agencies a lifeline.”