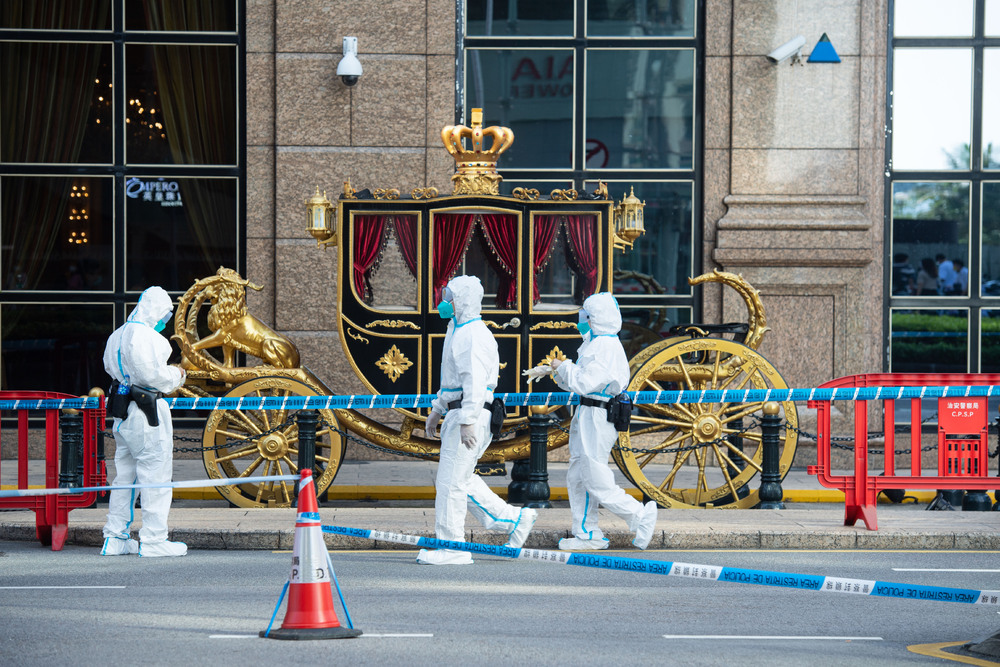 Macau entertainment premises to be closed amid Covid fear

Bars, cinemas, gyms, beauty parlors and karaoke clubs in Macau will close starting midnight, but not the casinos, as the enclave today sees one more renovation worker testing positive for Covid-19.

Civil servants have also been asked not to go to work until Thursday while schools and borders remain closed, as territory-wide testing to detect possible silent carriers ends tomorrow.

A 42-year-old Vietnamese female renovation worker, who is the colleague of three men, 40 to 52, was confirmed with the highly infectious Delta Covid-19 mutant variant yesterday as the latest confirmed case in this cluster. All four had been fully vaccinated with the mainland-made Sinopharm vaccine in Macau.

The cluster, which came to light on Monday when a 46-year-old male renovation worker from Zhuhai was diagnosed, has triggered tension among citizens as authorities could not identify his source of infection initially, according to Macau lawmaker Lei Cheng-i.

A spokeswoman from the center said the duo were on the same bus for 14 minutes, during which they had stood next to each other and the worker subsequently took a seat behind the guard.

“Surveillance camera footage showed case 66 (the guard) had touched a handle in the bus, and case 72 (the worker) had later touched the same handle,” she said.

She said genetic sequencing found the coronavirus in the two men to be fully identical, suggesting that one had infected the other.

The spokeswoman admitted it is difficult to track all passengers on the same bus as not all of them had their bus cards registered under their names, but she said authorities have published the card numbers of passengers that took the same bus and asked citizens to check if they were on it.

In a statement about the indoor venues' closure, authorities listed 18 sites such as bars, nightclubs, discos, theaters, internet bars, snooker and bowling venues, but casinos were not on the list.

However, Casino Oceanus, which two patients had visited, has been closed today for disinfection.

Macau's Public Administration and Civil Service Bureau announced this morning the suspension of work for civil servants until Thursday. Last Friday and Monday were National Day public holidays and today was supposed to be the first working day after the long weekend.

Meanwhile, thousands of Macau citizens queued at 41 testing centers last night for the third round of universal Covid-19 testing.

Most of the centers saw at least 200 to 300 people waiting in line. At the Venetian Macao testing center, more than 1,300 citizens waited for over two hours.

At 6pm today, most of the centers had their waiting time shortened to less than an hour.

One man tested “extremely weak positive” with a very low viral count but authorities said the man had contracted Covid-19 and recovered overseas, and believed the test picked up his residual coronavirus from the previous infection.

Authorities said on Monday that they target to complete the citywide test – which began at 9pm that day – within 48 hours.
#coronavirus  #covid 19  #vaccine  #covid
Add Comment