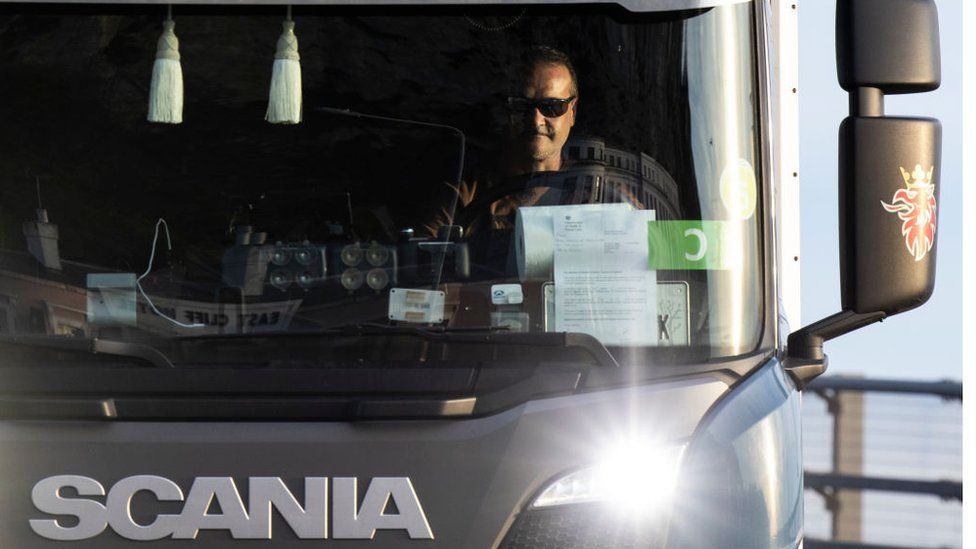 A haulage industry source has said they have been told by the government to expect drivers to have to take a Covid test when coming into the UK from mainland Europe.

The tests are expected to take place on the UK side.

Lorry drivers had previously been exempt from testing coming into the UK.

The Department for Transport said it was "carefully monitoring" an increase in cases in Europe and would keep all measures under review.

Four days ago Prime Minister Boris Johnson warned that a third wave of the pandemic in Europe could "wash up on the UK's shores."

This week Germany was due to extend its lockdown over Easter due to a third wave of infections, although it soon reversed the decision. France's president Emmanuel Macron said he wanted vaccinations "morning, noon and night" after an increase in intensive care cases and hospital admissions.

Now, some in the haulage industry say they've been told to expect that lorry drivers will be required to take a Covid test after travelling from mainland Europe to England.

France has stopped mandatory testing for hauliers travelling from the UK to France, a measure that had been in place from December due concerns about a UK variant of the disease.

Hauliers travelling from the UK to Denmark, Germany or the Netherlands still require a test.

The Department for Transport said: "We are carefully monitoring the increase in cases in Europe and will keep all measures under review as we cautiously remove restrictions throughout our roadmap."

The government has been encouraging international hauliers due to be in the UK for more than 48 hours to take a free coronavirus test.

Hauliers leaving the UK can also take a free test.

Trade volumes with the continent declined in January due to Covid-19 restrictions and the impact of new arrangements under Brexit.

Figures from the Office for National Statistics (ONS) show that UK goods exported to the European Union fell 40.7% in January, while imports tumbled 28.8%.

Nevertheless, the Prime Minister has indicated the government might further tighten restrictions on arrivals from France, including hauliers, to stop new variants of the Covid-19 virus spreading from the rest of Europe.

Britain has banned foreign travel until at least 17 May, except for essential work, education or health reasons. Ministers are due to review that position in April.

Questioning the PM at the Liaison Committee on Thursday, Labour's Yvette Cooper said every week 20,000 people arrived from France, and two-thirds of them - including lorry drivers - were exempt from those restrictions.