There have been some dark times in my 50 years in Hong Kong – the 2019 protests and the Covid-19 pandemic, for example – but they are a small price to pay for having had a front-row seat to world-changing events.

Fifty years is a pretty good milestone in the life of a country, a city or an individual. It is a suitable time to reflect on the highs and lows of the previous half-century, long enough to provide some perspective.

Last week was the 50th anniversary of my arrival in Hong Kong, just one week after my 24th birthday, so the city and I have shared a common destiny for five eventful decades. The experience has changed us both.

In 1972, Hong Kong was the proverbial “borrowed place, borrowed time” of Richard Hughes’ famous book. It was a Chinese city, ethnically, culturally and in just about every other way you could think of a part of the giant country to the north. Yet technically it was a British colony, seized by force of arms in the previous century by a small country from the other side of the world, which now was in decline and busy disengaging from everything “East of Suez”.

Clearly the situation was unsustainable. There was no clear vision of how things would develop except perhaps in the mind of one man, Deng Xiaoping, but at the time he was still sidelined by the traumatic events of the Cultural Revolution.

It was not until 1976 that order began to be restored and China began its rise to be one of the world’s great nations once again.

Meanwhile, at the local level a relatively new British governor, Murray MacLehose, took a deep breath and began to clean up the mess he inherited from previous administrations. Chief among these was housing – millions of people still lived in ramshackle squatter huts – and corruption, which was widespread.

By the end of the decade, Deng had become paramount leader and his pragmatic policies launched the economic miracle that was to transform the lives of hundreds of millions of people. He was prepared to scour the world for the most successful ideas, bring them home and adopt them in China after adaptation to local circumstances.

The creation of special economic zones, the first being the small neighbouring village of Shenzhen, was a part of this process. The interaction between the two places would permanently change the shape of Hong Kong’s economy and – some would say – the whole world.

Deng also turned his mind to the issue of national reunification, with the historical anomalies of Hong Kong and Macau being stepping stones to Taiwan, hence the development of the formula of “one country, two systems” and amendments to the national constitution to provide for creation of special administrative regions.

The first two were successfully created in 1997 and 1999. Resolution of the third awaits the arrival of similarly visionary leaders in Taipei and Washington.

MacLehose made several major changes to life in Hong Kong during the 1970s which paved the way to the city we see today. The two that spring most readily to my mind were introduction of an extensive public housing programme and establishment of the Independent Commission Against Corruption (ICAC).

It would have been quite impossible for our city to become one of the world’s most important international financial centres without these two reforms. It was also during this period that most of the population began to see Hong Kong as their permanent home, not as a springboard to somewhere else.

Inevitably, these events at the macro level had a significant impact on an individual at the micro level. My stepfather, who was a confessed corrupt policeman in Hong Kong in the 1960s, had briefed me on the situation before I left the UK. In my first job here, as a journalist on the tabloid Star newspaper, I found myself specialising in stories about police corruption.

This in turn led to my joining the ICAC in the first wave of recruits in 1974. By the end of the decade, I was married with two small children and ready to join the government proper, which I did in 1980 as an administrative officer.

The Sino-British discussions in 1982-84 which determined Hong Kong’s future were of course way above my head, but once the future direction was decided, implementation of those plans inevitably touched my career. In the 1990s, I was involved in drawing up the 1997-98 transition budget and also in a subgroup of the Joint Liaison Group dealing with financing of the airport railway. 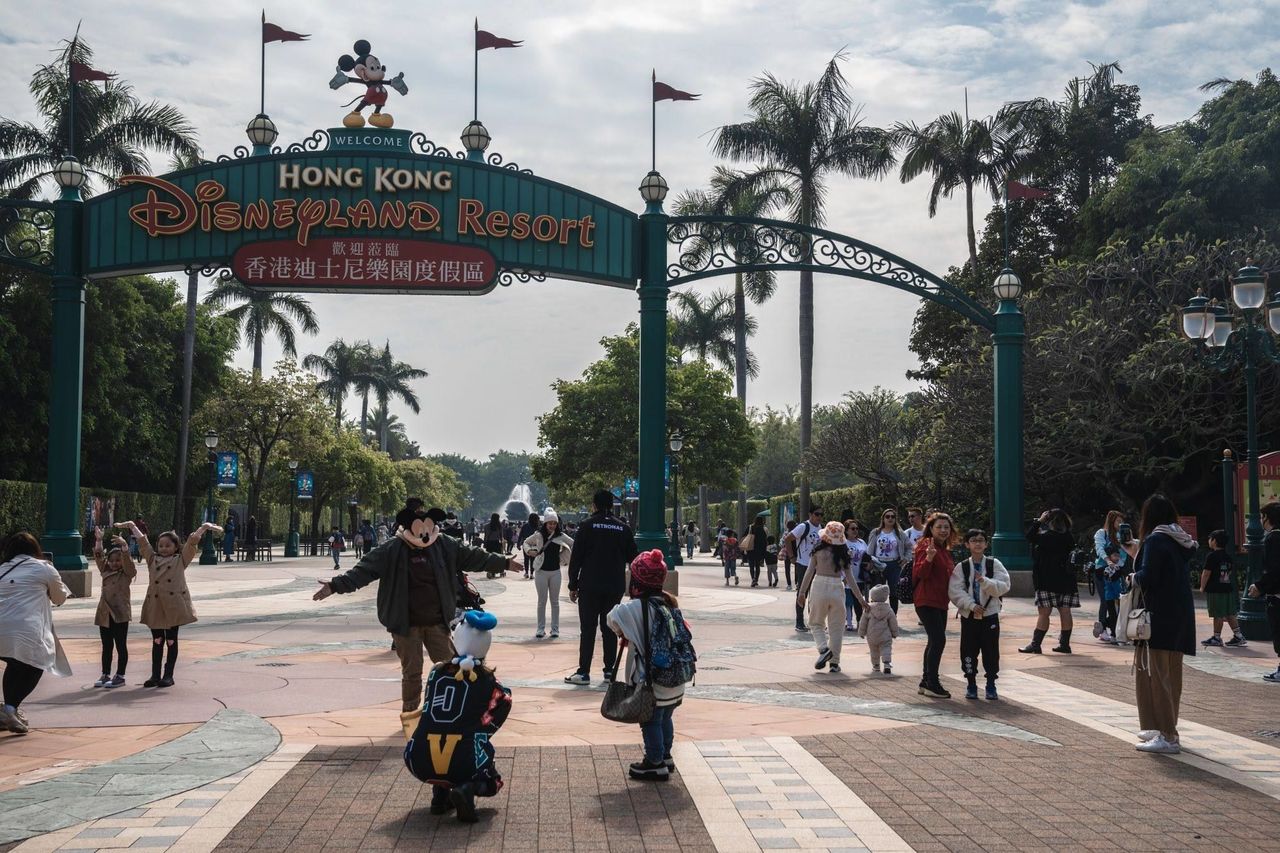 Visitors pose in front of the entrance of Hong Kong Disneyland on December 29.
After the handover, I became the lead negotiator for the Hong Kong Disneyland project and concurrently first Commissioner for Tourism, thus participating in our growth to becoming one of the world’s most popular travel destinations.

Later, I was asked to establish a new government department, InvestHK, and travelled the globe selling Hong Kong as the best place in the world for business. We worked together with mainland colleagues on joint promotions, extolling the package of Hong Kong and the mainland together to the benefit of both places and the international companies wise enough to get the message.

Of course, there have been dark episodes: the social disturbances of 2019 and the Covid-19 pandemic for the whole community, to name but two. But regrets? That would be ridiculous.

I have had a front-row seat to witness the development of world-changing events. Bring on the next 50 years.
#covid 19  #covid