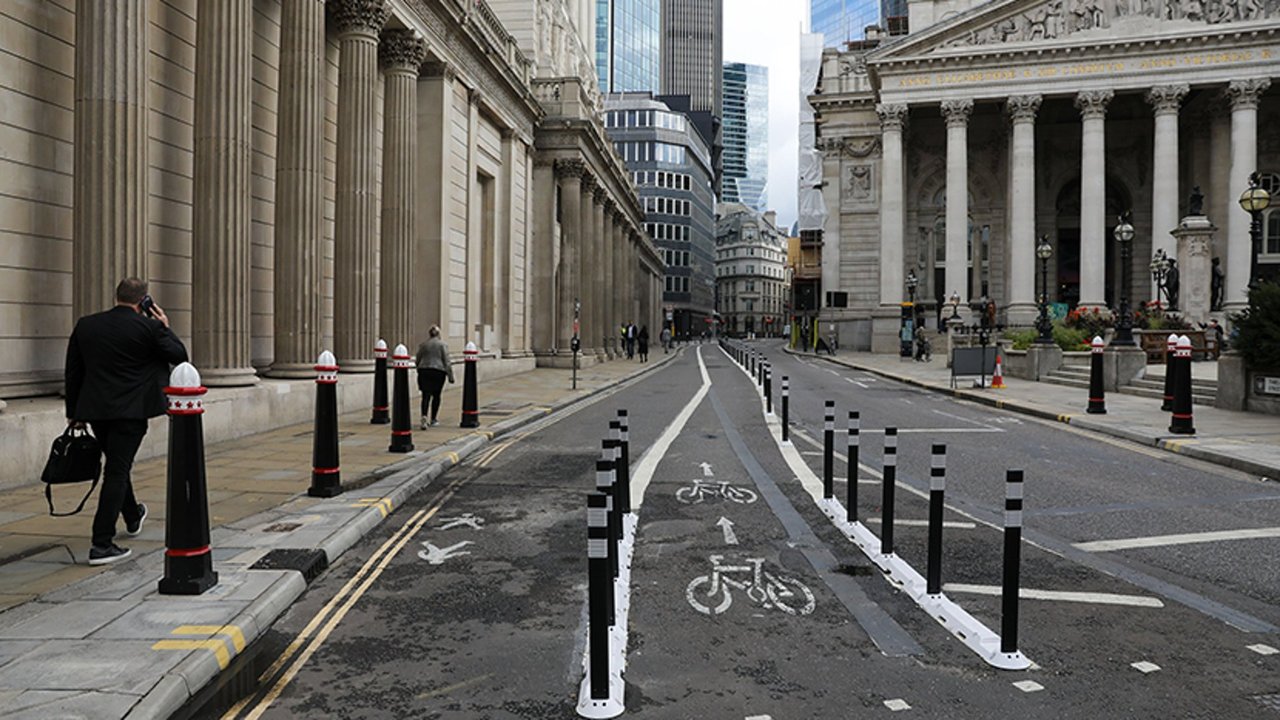 Late one evening in Yangon in Myanmar a few years ago, I noticed a grey Morris Minor van patrolling the streets. It had an old-fashioned double--ended trumpet loudspeaker on its roof blaring out an amplified voice. ‘What’s it saying?’ I asked my guide. ‘It tells the people “It’s late! Stop drinking and go to bed! You have a busy day tomorrow!”’

hat’s the spirit. We should get some of that in London. ‘Stop eating! Get on your bike! Pedal faster!’ Why has Covid brought out a rash of virtuous bullying? I have lost count of the number of times that Radio 4 has asserted that this plague needs to create a better, more caring, more aware, lovelier human race. (And if not, we can, of course, be ordered to be so.)

Now, in the middle of calamity, as we try to save a faltering economy, halt the return of a deadly pandemic, and resume normality, Transport for London (TfL), in league with earnest local councillors and encouraged by the government, has decided to take this moment to force Londoners to adopt a more worthy form of personal transport.

They have arbitrarily closed off Park Lane, Euston Road, the Edgware Road and hundreds of other main arteries. Its ‘world-leading street-space for London’ will ‘stop rat-runs and make London areas access only’. Eh? How? These are the main roads. You may love this if you are fit and 20. The elderly think it’s bonkers. Ordinary working people with jobs and cars are simply confused.

I’m not anti-bike. I love them. I loved mine so much that in the early 1970s, I was just about the only bloke on a bicycle in central London (or so it felt). I used to haul it into the back of a black cab (particularly if I was a little drunk and unwilling to face the back wind of articulated trucks in a rainstorm).

Bikes are more popular now, but still a limited enthusiasm. These days, however, minority zeal is our new master. Mount up, buster. You are either with us or you are with us.

On Not the Nine O’Clock News, 40 years ago, Mel Smith played a man on a phone doodling on an envelope. Hanging up, he handed the squiggles over as the ‘new one-way system for Basildon’.

This comic creation is now at work for TfL, putting in bicycle lanes that end abruptly and arbitrarily, and closing roads everywhere, with planters, modal filters, Copenhagen crossings and Experimental Traffic Orders.

In May, the Mayor of London, Sadiq Khan, and TfL launched this ‘bold new Streetspace plan’ to ‘rapidly transform London’s streets to accommodate a possible ten-fold increase in cycling and five-fold increase in walking when lockdown restrictions are eased’. They have reduced the real traffic to a long, honking, choked pipe of polluting fumes, while cyclists weave in and out, scrupulously avoiding the new ‘lanes’.

I rarely drive in London. I live in the middle of all this and walk everywhere. But the other week I got into my mobile ‘Hazchem sealed unit’, my car, and ventured out into the extraordinary new set-up along the Euston Road.

I confronted vast pavement spaces, to enable the nonexistent central London workforce to keep yards apart on their way to those packed basement restaurants and pubs, and a lane to facilitate an imaginary horde of new bikes. With another carriageway taken over to allow the occasional vacant bus to belch past, every construction vehicle, van and ‘rig’ in London was now creeping along a narrow gut, spewing out particulate matter.

ven if there is a ‘ten-fold increase’ in cycling (which there isn’t), central London is already over-provided with lanes. How do I know? Because the crazy-golf chutes are generally empty. Why? First, because the lanes jump around all over the place. They disgorge the law-abiding into dangerous intersections. And secondly, you can’t overtake.

Everybody knows that half the cyclists in London think they are in a race. Bicycle accidents increased by 57 per cent after the introduction of the Tavistock-Torrington Place lane. Every sane cyclist already uses the back roads for their daily commute.

Motorised traffic won’t diminish. It will head for these back roads. (Exactly as I did.) It may not mount the pavements and zip up one-way streets like a self-respecting bicycle boy, but it will pollute the very places where central Londoners live. We only have a rush hour because central London councils want one.

A good proportion of their housing stock remains workplace, stuffed with commuting lawyers and accountants. They have used Article Four directions to prevent anyone turning it back into dwellings. The windfall from business rates means that they prefer old-fashioned zoning.

The most effective planet-saving reforms would be to prevent commercial ‘centres’ and to spread ‘live-work’ across the entirety of London. Instead, we are once again pursuing outmoded and outdated ‘visions’. (Or ‘fantasies’, as London-wide protests by ordinary working people are calling them.) Our capital is a success because people inhabit it.

There is no commercial ghetto rotting away, as in so many British cities. People live right by the largest shopping centres. A few years ago, Khan wanted to pedestrianise Oxford Street. If that had happened, every diesel-powered vehicle that rumbles along it would have gone to pump out its fumes into the back streets where children sleep. He was thwarted by the Marylebone Association, who went to the voters on this single issue.

So if Londoners want to get rid of those who think that a pandemic gives them an excuse to re-order their ten square miles of local borough and save the entire planet, then elect them out. Most of them are hanging on by less than a hundred votes.

But don’t blame the Mayor alone for this failed scheme. After spending oodles of cash, he has now decided to open the Euston Road again. It was all just ‘an experiment’. Nobody wanted to bike in his lane.

Never mind. His cause has been embraced by local councils. The Gray’s Inn Road is next up for works.
Add Comment