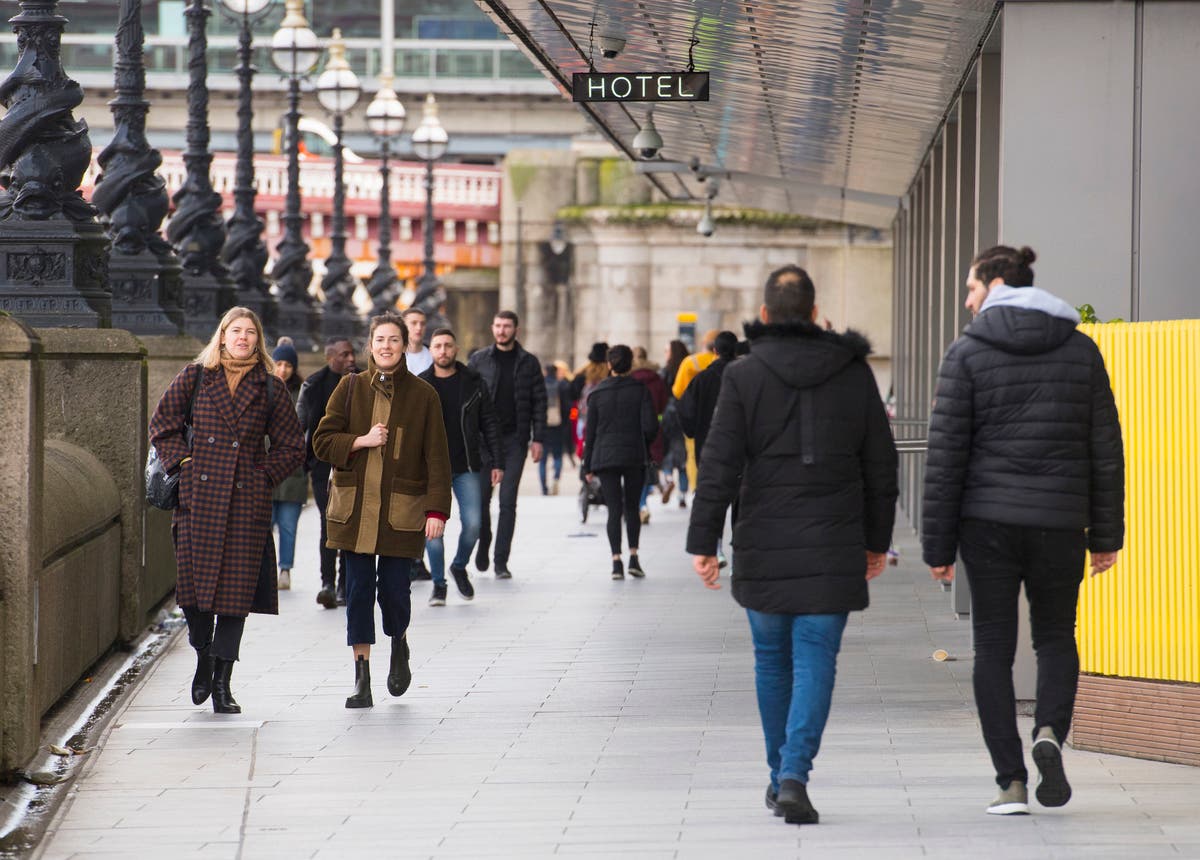 London Covid-19 cases have tumbled 90 per cent since the second wave peak, official figures revealed today as Boris Johnson was preparing his plan to ease lockdown.

Fifteen boroughs have now fallen below the key seven-day rate of 100 new infections per 100,000 people as London leads the nation’s fight against the epidemic.

The positive news came as:

- Bristol scientist Professor Adam Finn, a member of the Joint Committee on Vaccination and Immunisation, said vaccines were now “definitely doing the job” in stopping people getting coronavirus so severely that they have to be hospitalised.

- Professor Neil Ferguson, whose work was key in Mr Johnson ordering the first lockdown, said it was still “early days” when it came to data on vaccine effectiveness but suggested a figure of two-thirds efficacy from a single dose was “not too far off”. The Imperial College London scientist said the “relax one thing and see what the impact is, relax again” strategy to ease restrictions, which he expects the Government to follow, may well mean “that by the end of May, we’re in a very different country than we are today”.

- Mr Johnson, other ministers, scientists and health chiefs are analysing a data dossier on the state of the epidemic, how hospitals are coping, and the vaccination roll-out’s impact, with Britain one of the fastest in the world with more than 16.4 million people having had a first dose. The Prime Minister will unveil his blueprint for easing lockdown on Monday. Mr Johnson was also hosting an online G7 summit encouraging wealthy nations to donate vaccine supplies to developing counties.

- Foreign Office minister James Cleverly promised that the Government would be a “global force for good” in fighting the pandemic and, unlike “some countries”, the UK would not use the promise of vaccine supplies to other countries as “short-term diplomatic leverage”.

- Welsh first minister Mark Drakeford gave the first hope of holidays in Britain by revealing that he is looking at reopening self-contained lettings at Easter.

- Tony Blair published his own traffic light system for reopening different sectors of the economy with thresholds set by the R number.

- There were reports that people in their forties could be getting the Covid jab by the end of March, although this would be ahead of the Government’s current timetable.

With confirmed Covid-19 cases falling in London twice as fast as some other regions, the capital’s public health chief, Professor Kevin Fenton, appealed to Londoners to “keep momentum up and continue driving the virus down” as the lower disease levels are, the harder it will be for coronavirus to surge back as restrictions are eased.

Some of the capital’s most deprived boroughs are also below the 100 rate, with Tower Hamlets down to 73.3, and Hackney and the City of London area on 77.7. The other boroughs under 100 are Richmond, Greenwich, Lewisham, Southwark, Enfield, Wandsworth, Bexley, Bromley, Kensington and Chelsea, and Haringey.

Public health chiefs in the capital want the whole of London to be below 100 before lockdown is eased, and getting closer to the levels of last summer.

Speaking to The Evening Standard, Professor Fenton, London director for Public Health England, said: “Case rates, new hospitalisations and deaths are continuing to decline and the number of Londoners protected by a life-saving vaccination is rising each day.

“However, our hospitals still have high levels of Covid-19 patients requiring treatment so we must keep momentum up and continue driving the virus down.

“As we learnt in the first wave, maximally suppressing virus transmission to very low rates before emerging from lockdown gives London the best chance of keeping rates low for longer.

“Now that vaccines are increasingly available, it’s essential we keep doing everything we can to stop the virus it in its tracks and continue to follow the guidelines and remember hands, face, space.”

- Twenty-one boroughs saw confirmed cases fall by at least 40 per cent in the week to February 13, with 30 seeing a decline of at least a third.

- In Newham, where the rate has fallen to 124.9, the borough’s director of public health Jason Strelitz tweeted: “Very positive progress in Newham - really good news & nearly 7000 more of our community vaccinated in the past week! but we need Covid rates much lower at August levels (almost none) rather than mid October levels where we are now: We stay apart now so we can be together later.”

- A further 1,391 confirmed cases were announced on Thursday for London, higher than in previous days, which will raise some concerns, though a degree of this may be due to surge testing to identify cases of the South African variant. The real number of cases is higher than those confirmed, partly due to so many people having the disease asymptomatically.

- Health chiefs say reducing cases as disease levels get low becomes increasingly more difficult as people who find it most difficult to avoid the virus, such as key workers or individuals who are unable to work from home, are among the hardest to protect.

- There were 3,292 coronavirus patients in London’s hospitals as of Wednesday, down from a second wave peak of 7,917 on January 18.

- There were 749 Covid patients who were so ill that they were on ventilators as of Wednesday, a number which would take up a very large proportion of London’s normal intensive care capacity, though down from more than 1,200 in January.

- A further 41 coronavirus deaths, within 28 days of people testing positive for the virus, were announced for the capital on Thursday, taking the total to 14,836.

- A further 56,382 first dose vaccinations were announced on Thursday to have been administered in London, taking the total so far to 1,587,731.