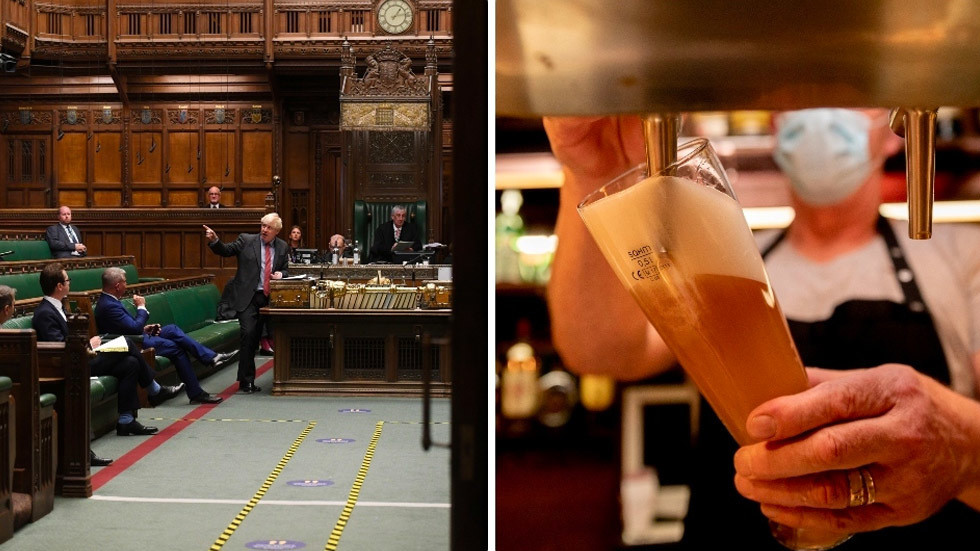 ‘Last order, last order!’ Pub-deprived Britons snicker as sale of alcohol banned in parliament’s bars and restaurants after all

British MPs will not be exempt from the pub-shuttering lockdown after all. The Speaker of the House has ordered a temporary ban on alcohol sales in the House of Commons in a gesture of solidarity with the common folk.

Days before London is to come under a Tier 2 Covid-19 lockdown, MPs were told they will have to lose some of their drinking privileges too. The bars and restaurants operating in the House of Commons had been exempted from the new social distancing rules imposed on the British hospitality industry because they counted as “workplace canteens.” But now they will have to stop serving alcohol.

On Thursday, Speaker Lindsay Hoyle banned“for the foreseeable future” the sale of alcoholic drinks “across the House of Commons-end of the estate.” The ban comes into force on Saturday, the same day that London’s ramped-up restrictions begin. The stated reason is that workplace conditions for the MPs should be “in line with the national picture.”

The equalizing decision was mostly met with approval, though many comments were laden with sarcasm for good measure. Some people wondered if MPs would get wild on Friday before the period of forced sobriety comes into effect.

So they can all get pissed on Friday, and make more disastrous decisions for the country.. great 🙄

Some commenters even came up with ideas for other substances and activities deserving prohibition in the parliament. After all, the British legislature has a not-so-secret reputation for indulging in vices.

Great, they just need to ban class A drugs and sexual predators and it would be like every other workplace!

Others wondered if the Speaker’s order had a secret caveat. If a drink is free (and paid for with taxpayer money), then presumably no sale takes place, right?

What they getting it for free now

Many people pointed out that MPs would still have plenty of opportunities to circumvent the ban, should they wish to do so.

Reading between the lines then.

Does this mean they get free booze now?

But, are flasks still ok?

A few presumably ironic remarks suggested that the ban could hurt the lawmaker’s ability to pass legislation or may even pose a threat to democracy in the UK.

Considering how they vote, I would have thought being sozzled was a pre-requisite.

Was it a democratic decision?
If Putin would do sth like this, there would be more sanctions from Britain.