Labour is becoming “irrelevant to workers” and it is now hard to justify handing the party millions in funding, the head of the party’s biggest union donor has warned.

In an interview with the Observer, Sharon Graham, the general secretary of Unite, said she felt Labour’s leadership was, in effect, “sticking two fingers up” at workers with its response to strike action and its abandonment of pledges to renationalise public utilities.

Graham was reacting after Keir Starmer provoked anger on the left by sacking Sam Tarry MP, a shadow transport minister. Tarry’s dismissal followed his statement that workers deserved a pay rise that matched inflation, a claim he made while joining rail workers on a picket line last week. Shadow ministers had earlier been ordered not to join picket lines. Starmer also said last week that past pledges to renationalise utilities had to be reassessed in the light of the debt left by the Covid pandemic

Labour officials insist that Tarry had been fired for making up policy without consultation, rather than for joining the picket line. They also said Labour had to show it was ready for the responsibilities of government. However, Graham said that Labour was facing a “dangerous moment” because it was losing relevance for the thousands of workers she was helping fight for better pay and conditions.

“It is undoubtedly the fact that Labour is becoming more and more irrelevant to workers,” she said. “It’s unfortunate, but it is a fact. What’s required right now is for the party that is there for workers stands up and to stop being embarrassed to be the party for workers. 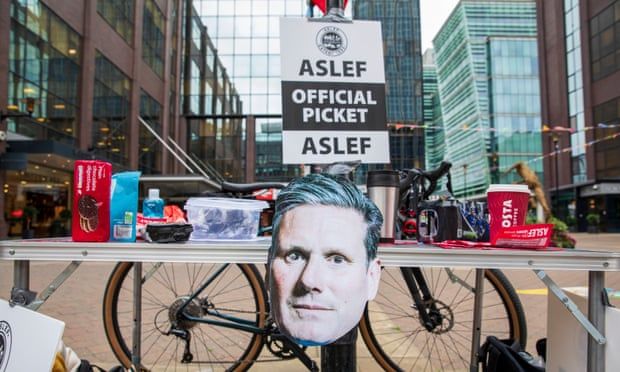 “Workers are being crushed here. I think there’s a real crossroads here for Labour. I don’t know anyone who thinks what happened to Sam Tarry is correct. He’s on a picket line. He’s talking about wages. Is Labour now saying that people should have a national wage cut? If you’re not keeping up with inflation, you are having a cut in pay.”

She also warned that she found it difficult to justify continuing to fund Labour through affiliation fees. She said the issue would be debated by union members at a crucial meeting next summer. Unite continues to give more than £1m a year to Labour, but the funding has fallen significantly since Starmer took over as leader.

“I have no doubt it will come up with the Unite rules conference, I’ve got absolutely no doubt,” she said. “The last time it was debated, it was only narrowly won. I think it’s harder and harder to defend.

“There’s no point giving money to a party that is basically sticking two fingers up to workers. It’s almost like an abusive relationship. You are the voice of workers in Westminster; we are their voice on the ground. I think it’s a very difficult conversation and I think that members will decide.”

The news comes amid concerns within Labour over the handling of a week of rows, including between members of Starmer’s frontbench team. It has led to renewed frustrations over the direction of the party and Starmer’s performance, at a time when the Conservative leadership election has seen the Tories descend into bitter “blue on blue” warring.

Simon Fletcher, a former adviser to the Labour leader, warned that the rows had revealed the “limitations of Labour’s project as it stands” and that too much focus was on simply differentiating Starmer from Jeremy Corbyn. Writing on the Observer’s website this weekend, he states: “The Labour leadership’s problem is that it gives every impression of being more obsessed with differentiating itself from the previous leader than with the millions of people getting hit through their pay and their energy bills.

“An excess of caution leaves big issues unresolved, lying around like unexploded ordinance, only to go off at the wrong time. As a portent of how Labour would govern, it suggests an administration prone to be buffeted about by events.

“In truth, the Labour leader’s office does not seem to have a theory to fully explain the present situation in Britain, one that then aims to use all the policy levers to tackle the consequences of it. As one experienced Labour campaigner described it to me, ‘their mindset is benevolent managerialism.’ Labour’s detachment is why it struggles to tell a persuasive story about what is happening to people and, therefore, ‘why Labour’.”

Meanwhile, former deputy leader Roy Hattersley uses a piece in the Observer to call on Starmer to rethink his Brexit stance. He calls on the party to secure access to the EU’s single market in exchange for higher European immigration. “This is not the time for Labour to talk of making Brexit work,” he writes. “It is time to expose its failure and to offer a radical alternative – a closer working relationship with the EU.”

However, Labour sources said that Starmer and the party had made a series of significant interventions in recent weeks – including making it clear that it wants to make Brexit work – and set out economic plans in a speech last week. They also said recent polling showed that claims about Starmer being out of touch with workers were untrue, and the party had to be seen as serious about forming a government.

“We wouldn’t choose to pick a fight with unions over this,” said a senior source. “Do we want pay rises for workers? Of course, we do. But we’re also trying to balance the fact that we’re hoping to be in government soon. This has not been about making an example of Sam or picking a fight. It would be chaos if people were able to appear in the media and make policy without consultation. That can’t be how collective responsibility works.

“There is nothing in terms of evidence to suggest that Keir Starmer has done anything but improve support for Labour among working people. We’re trying to reconnect with them and there is evidence that we are succeeding in that.”

In response to Tory threats to impose more anti-union laws, some union leaders have raised the prospect of joint action reminiscent of the general strike, and Graham ruled nothing out. However, she said she had no interest in “glorious defeats” and had instead been planning new “strike plus” measures designed to gain an upper hand on employers offering unfair deals to employees. These include using forensic accountants to investigate companies and gain leverage over them.