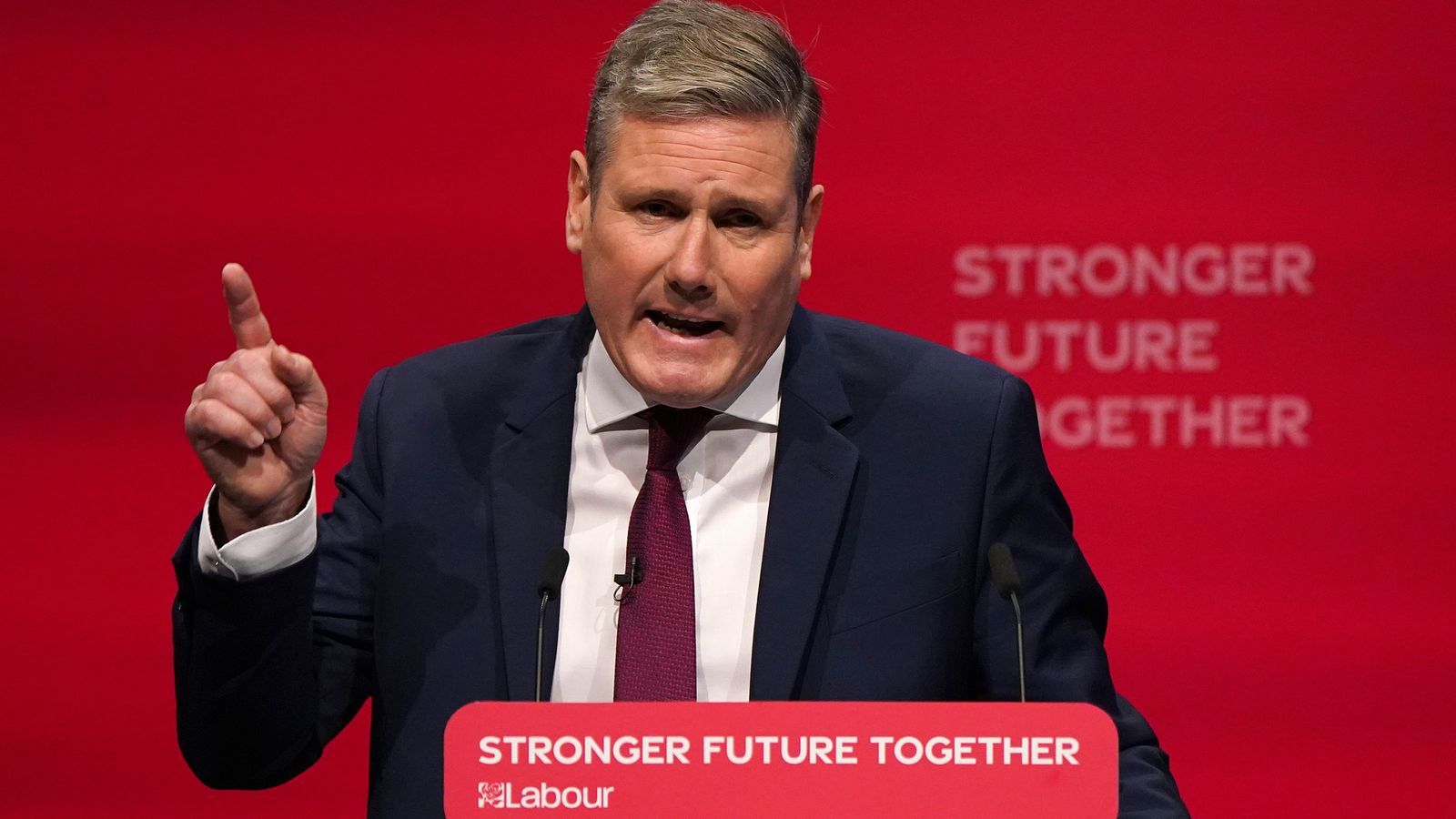 Sir Keir Starmer has said Labour will never again go into an election without a "serious plan for government", in a speech to his party conference.

He said the country faced a "big moment" that "demands leadership" - and as prime minister he would provide it.

Sir Keir set out new policies on mental health, education and housing, but it was also a highly personal speech about his own background and values.

He got a standing ovation, but was heckled by some left-wingers.

Sir Keir told those barracking him in the Brighton Centre that he was about "changing lives" not "shouting slogans", to cheers from other delegates.

After a week dominated by rows with the left, Sir Keir urged activists to come together to beat the Conservatives, at a time when energy bills are rising, petrol supplies are running short and the economy is recovering from the pandemic.

"These are big issues, but our politics is so small," he told delegates. "So our politics needs to grow to meet the scale of the challenge."

The 89-minute speech was Sir Keir's first chance to address a full Labour conference since becoming party leader 17 months ago, as last year's event was held largely online because of Covid.

Addressing a packed auditorium, he said he would "not stand for the record levels of knife crime that we have in this country today" and called Labour a party of "patriots".

He spoke at length about his background, focusing on his previous career as a human rights lawyer and his mother's years of suffering from Still's disease, a form of inflammatory arthritis which severely restricts mobility.

Sir Keir described his parents as "the two rocks of my life", saying his father, a toolmaker, had given him a "deep respect for the dignity of work".

He contrasted his life with that of Prime Minister Boris Johnson, whom he described as a "trickster", a "trivial man" and a "showman with nothing left to show".

With Labour having lost four general elections in a row, the last one by the biggest margin since the 1930s, Sir Keir attempted to distance himself from the policies of ex-leader Jeremy Corbyn.

While he did not mention his more left-wing predecessor by name, he said: "We will never under my leadership go into an election with a manifesto that is not a serious plan for government.

"It will not take another election defeat for the Labour Party to become an alternative government in which you can trust."

By contrast, Sir Keir paid tribute to the party's 13 years in power under prime ministers Tony Blair and Gordon Brown, saying they had cut child and pensioner poverty, taken on more teachers and nurses and reduced hospital waiting times.

At the start of his speech Sir Keir was repeatedly shouted at by one woman in the audience, but replied: "I normally get heckled by the Tories at this time of the week, so this doesn't bother me."

Sir Keir Starmer deliberately took his time to spell out his vision to voters that Labour has lost.

In an effort to connect with them, he spoke in personal terms about his parents and their influence on his political beliefs, revealing more about what drives him.

Persistent hecklers in the hall were a reminder that support for Sir Keir within Labour is far from unanimous, but they may not hurt his attempt to show he's closing the door on the Corbyn era.

There were some policy announcements, but the main message to voters was an appeal to look again at Labour after four election defeats in a row.

The speech was also a challenge from Sir Keir to his party to change if wants to win again.

It was the longest, most detailed argument he has yet made that he is the man to lead it back into Downing Street.

Moving on to policies, he announced that a Labour government would upgrade 19 million homes so that they reach a minimum "Band-C" energy efficiency level, providing grants for low-income households to achieve this and low-interest loans for others.

The changes would include better insulation, double glazing and new heating systems, saving households £400 a year in bills on average, he promised.

Other pledges in the speech included:

"I can see the ways in which we can remake this nation and that's what we get to do when we win," Sir Keir said.

"So let's get totally serious about this - we can win the next election."

Sir Keir's speech ended a five-day conference which saw him get backing for changes to the way the party elects its leaders, against fierce opposition from the left, who feel they are being marginalised.

On Monday, shadow employment secretary Andy McDonald quit Labour's front bench, saying he had been ordered to argue against raising the minimum wage to £15 an hour.

The next day, the conference backed a motion calling for this to be party policy, although this is not binding on the leadership.

And delegates voted in favour of nationalising the UK's energy industry, despite Sir Keir ruling this out.

The leader also angered the left when he pushed through changes to the way Labour elects its leaders.

"We all know that the NHS crisis is bad, but what will our party do about it? We are no clearer on that than we were this morning," it added.

The trade union Unite said there "wasn't much" in it about the cost of living and workers' rights.

But Christina McAnea, general secretary of the union Unison, said the Labour leader had demonstrated "vision" and shown the party "could bring hope to the many families forgotten by this government", adding: "This is a serious plan for change".

Conservative Party co-chairman Oliver Dowden said: "As Labour's chaotic conference comes to an end, it is clear Sir Keir Starmer's party is more divided than ever and has no plan.

"Labour spent five days talking to themselves about themselves instead of to the country."