The King has welcomed South Africa's president at the start of the first state visit he is hosting as monarch.

The president visited Westminster Abbey and is attending a banquet hosted by the King at Buckingham Palace.

It is the first state for more than three years after they were stopped during the Covid pandemic.

The King is hosting a white-tie banquet at Buckingham Palace for Mr Ramaphosa on Tuesday evening where both men will give speeches.

The banquet is a key moment in the ritual of a state visit, with food and toasts in a splendid setting, with staff in tails ferrying food to tables that have taken five days to get ready.

It is where the vision of monarchy meets the realpolitik of trade and international relations.

For the visit of the South African president, the menu is grilled brill for a starter, a ballotine of pheasant for the main course and vanilla parfait with caramelised apples for a pudding.

This is being washed down with French and English wines.

The Prince and Princess of Wales met the South African president at his London hotel on Tuesday morning before escorting him to Horse Guards Parade for the ceremonial welcome with the King.

Prime Minister Rishi Sunak, along with Foreign Secretary James Cleverly and Home Secretary Suella Braverman, were also at Horse Guards, where the president and King inspected soldiers from the Coldstream Guards.

More than 1,000 soldiers and 230 horses lined up on the parade ground in central London as part of the traditional opening of a state visit.

His Majesty then rode down the Mall with Mr Ramaphosa in a carriage procession to Buckingham Palace.

After lunch at the palace the King showed Mr Ramaphosa a selection of photographs featuring the Royal Family's connections with South Africa, including a 1996 picture of the former South African president and anti-apartheid campaigner Nelson Mandela at a Buckingham Palace state banquet.

Among the items was a copy of a speech the late Queen gave in Cape Town on her 21st birthday in 1947 where she pledged to dedicate her "whole life whether it be long or short" to service of the Commonwealth. 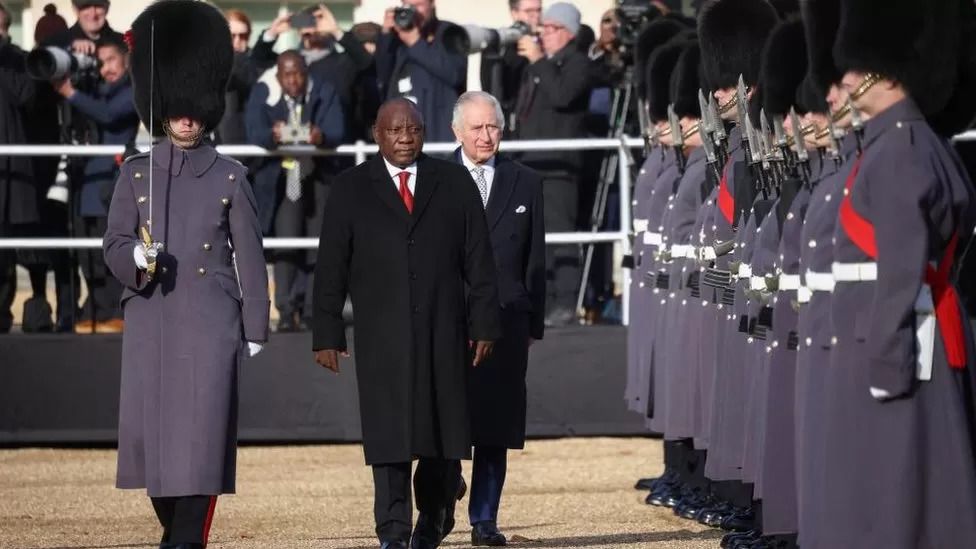 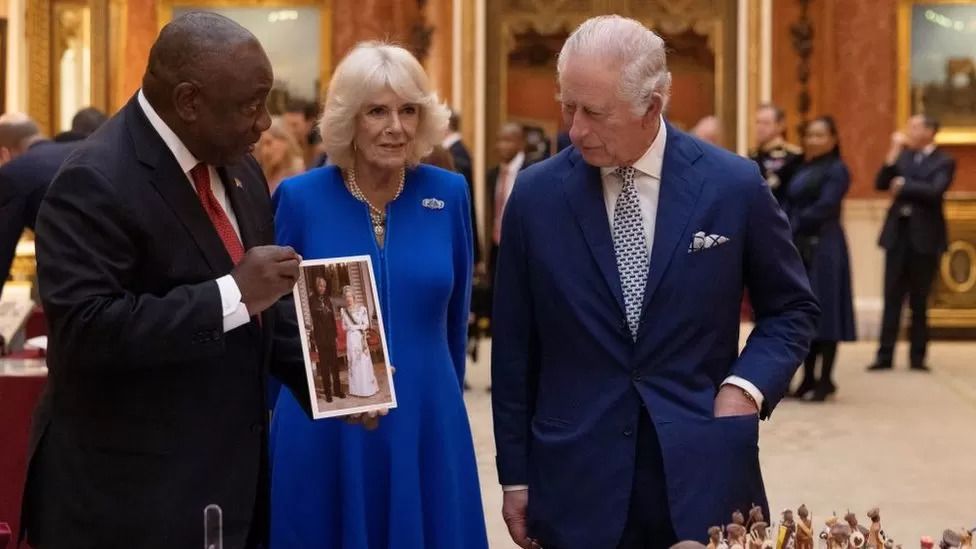 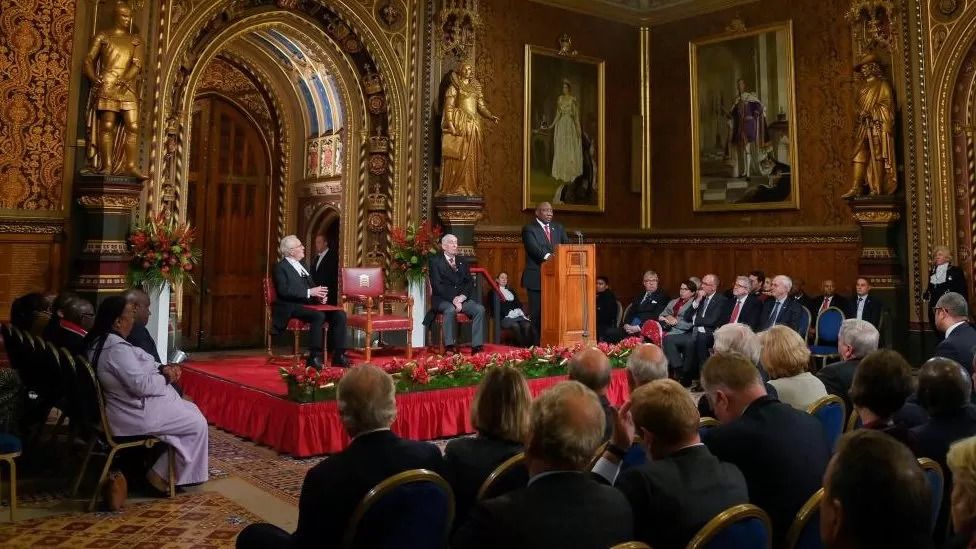 Mr Ramaphosa gave a speech at the Houses of Parliament attended by Commons Speaker Lindsay Hoyle
Mr Ramaphosa, who has been head of government in South Africa since 2018, followed the tradition of laying a wreath at the Tomb of the Unknown Warrior in Westminster Abbey, and addressed MPs and peers in the Royal Gallery of the Palace of Westminster.

BBC southern Africa correspondent Pumza Fihlani says the president is hoping to use the state visit to drum up support for UK investment in South Africa to bolster the country's economic development and industries.

But his visit comes at a time when Mr Ramaphosa is facing criticism over South African unemployment levels and a return to power outages affecting households, businesses and schools across the country - almost every day for a number of hours at a time.

This month he also said he would "step aside" if charged over an alleged cover-up of a robbery at his private farm, which he denies.

On the day the state visit in London began, Mr Ramaphosa received the backing of a majority of his African National Congress' 4,000 branches nationwide ahead of his party's leadership conference next month.

South Africa's First Lady, Dr Tshepo Motsepe, is reportedly recovering from eye surgery and was advised not to travel to London. 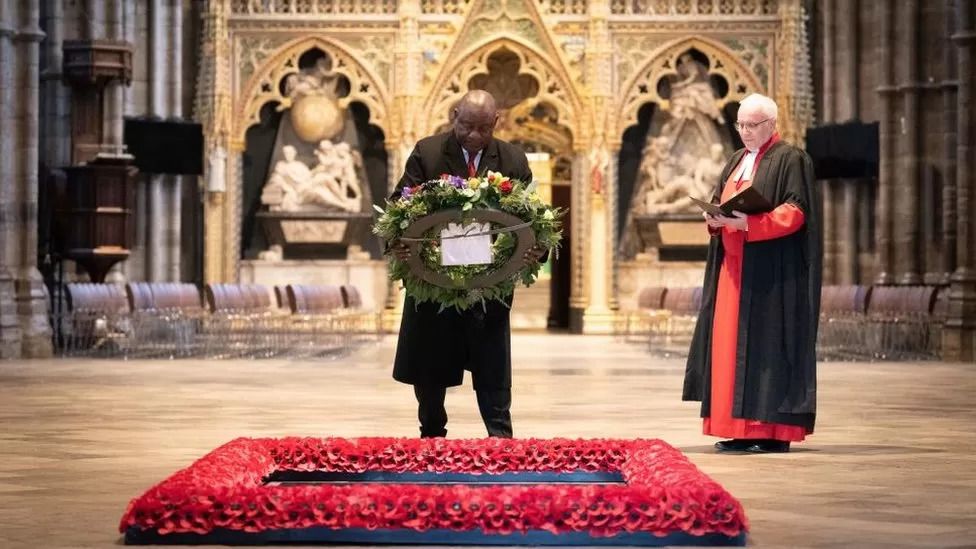 In a joint address to members of both Houses of Parliament on Tuesday afternoon, Mr Ramaphosa called for improved trade and investment links between the UK and South Africa to help his nation deal with its issues with power cuts.

He also said he would urge Mr Sunak to agree a three-fold increase in the number of South African university students coming to study for doctorates in the UK when they have lunch at No 10 on Wednesday.

On Wednesday, the Earl of Wessex will escort Mr Ramaphosa to the Royal Botanic Gardens, at Kew in south-west London.

The South African leader will then visit Downing Street to meet Prime Minister Rishi Sunak, before returning to the palace to bid farewell to the King.

The president is also set to receive a call from Labour leader Sir Keir Starmer and attend a Guildhall banquet with the Duke and Duchess of Gloucester.