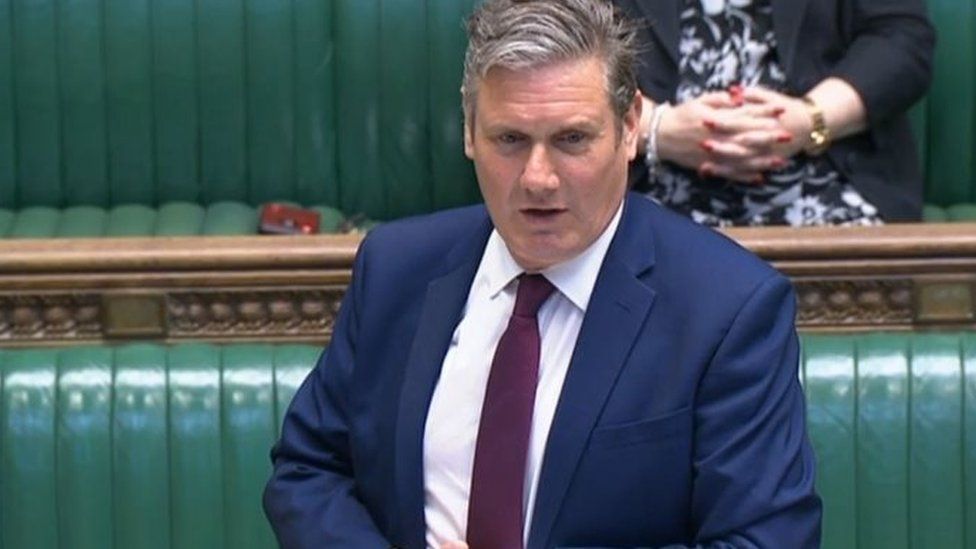 Keir Starmer to isolate after his child tests positive for Covid

Labour leader Sir Keir Starmer is to self-isolate after one of his children tested positive for Covid, a spokesman has said.

A statement from his office said one of his children tested positive at lunchtime, but Sir Keir was doing daily tests and tested negative this morning.

Sir Keir was in the House of Commons for PMQs earlier.

The PM and chancellor are also self-isolating after contact with the health secretary who tested positive.

A further 73 people have died within 28 days of a positive test in the UK and another 44,104 cases have been recorded, according to the latest government figures.

In a tweet, Sir Keir said it was his responsibility to isolate with his family. This is the fourth time the Labour leader has had to self-isolate since the pandemic began.

In the House of Commons, Sir Keir described a "summer of chaos" amid soaring numbers of people self-isolating at home.

The Labour leader dubbed Prime Minister Boris Johnson - who is himself self-isolating at his country house in Buckinghamshire - the "Chequers one" as he mocked Mr Johnson's isolation in the same week that most remaining curbs were lifted in England.

Speaking in the Commons, Sir Keir said: "Everything may be calm from the prime minister's country retreat but back here the truth is we're heading for a summer of chaos."

Appearing virtually at PMQs, Mr Johnson urged people to stick with self-isolation rules ahead of changes next month because it is "a vital tool in our defence".

He added: "I apologise to everybody in business up and down the land in all kinds of services, public sector or otherwise, who are experiencing inconvenience."

More than half a million alerts telling people to self-isolate were sent by the NHS Covid-19 app in England and Wales in the first week of July, with supermarkets saying they may have to cut opening hours or shut shops due to a lack of staff.

Businesses have warned of increasing staff shortages caused by people being forced to self-isolate by the NHS Covid app. Iceland and Greene King said on Monday they had had to shut shops and pubs as a result.

Business lobby group the CBI has warned that the problem could hamper the economic recovery.

The government has said it is "crucial" for people to quarantine after being "pinged" by the NHS Covid-19 app.

Following news on Saturday that Sajid Javid had tested positive and been in contact with Mr Johnson and Chancellor Rishi Sunak, No 10 said a workplace pilot scheme would allow them to keep working from Downing Street.

But the announcement met with an angry response, with opposition parties saying it suggested there was "one rule for them and another for the rest of us".

The prime minister and chancellor later announced they would complete a period of isolation.

Speaking in a video on Twitter after the U-turn, Mr Johnson said: "We did look briefly at the idea of us taking part in the pilot scheme, which allows people to test daily, but I think it's far more important that everybody sticks to the same rules and that's why I'm going to be self-isolating until Monday 26 July."