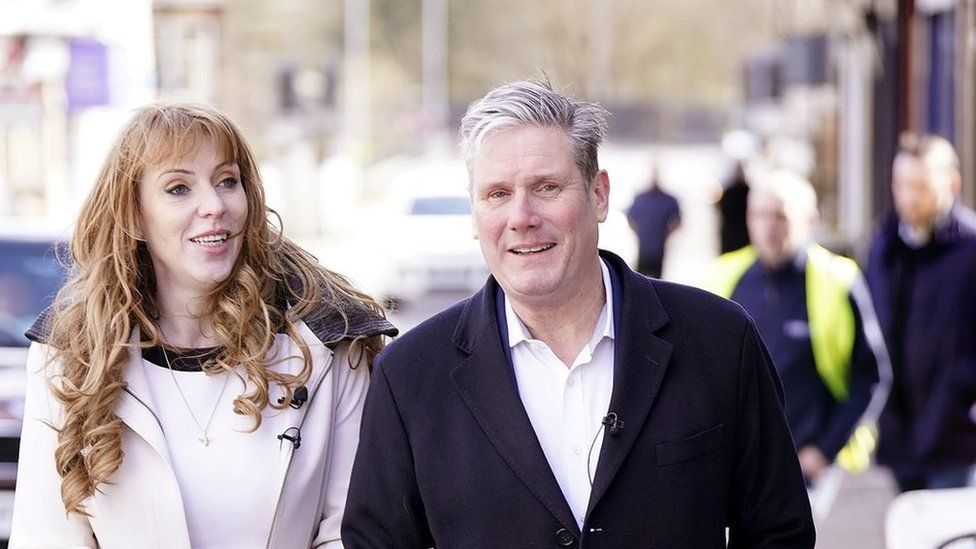 Keir Starmer's Durham drink - what were the rules?

Durham Police has announced that it is opening an investigation into potential breaches of Covid regulations at a gathering in the city on 30 April 2021.

It is referring to a gathering at which Labour leader Sir Keir Starmer was pictured through a window holding a bottle.

A Labour Party spokesperson said: "We're obviously happy to answer any questions there are and we remain clear that no rules were broken."

The picture of the Labour leader was taken in the run-up to the 6 May Hartlepool by-election in the office of City of Durham MP Mary Foy - inside Durham Miners' Hall.

Sir Keir has explained that a takeaway was ordered for the people working in the office.

"All restaurants and pubs were closed so takeaways were really the only way you could eat," he told Good Morning Britain.

"So this was brought in and at various points people went through to the kitchen, got a plate and had something to eat."

What were the rules at the time?

On 30 April, England was under "Step 2" rules, which had been introduced on 12 April.

Gathering indoors with people from outside your household or support bubble was against the law.

There was an exemption for "work purposes", although working from home was recommended in the guidance, but the rules did not mention socialising at work.

Bars, pubs and restaurants were allowed to open outdoors for groups of six people or two households, but indoor service was not allowed.

Could the rules have been broken?

The question for police will be whether Labour officials eating and drinking together was "reasonably necessary for work" and whether drinking beer (assuming the bottle contained beer) makes a difference to that.

It is worth noting that the Metropolitan Police decided not to investigate one event at Downing Street at which alcohol was drunk.

One of the events mentioned in senior civil servant Sue Gray's initial report into Downing Street gatherings was on 15 May 2020, when the prime minister and members of staff were pictured with bottles of wine in the Downing Street garden. At the time, Mr Johnson said: "Those were meetings of people at work, talking about work."

That was one of the gatherings that the Met decided they would not investigate.

What have the police said?

Durham Police reviewed the footage of Keir Starmer in February this year and said it did not believe an offence had been committed.

But on 6 May a spokesperson said: "Following the receipt of significant new information over recent days, Durham Constabulary has reviewed that position.

"We can confirm that an investigation into potential breaches of Covid-19 regulations relating to this gathering is now being conducted."

Was Angela Rayner there?

Labour initially said that its deputy leader Angela Rayner had not been at the event, but now says that statement was a "mistake" made in "good faith".

A spokesperson told the BBC there was no reason to conceal Ms Rayner's attendance, as no lockdown rules had been broken.

What was the guidance?

In addition to the legal restrictions, the government issued guidance for workplaces.

The guidance on gathering at work at the time was that people should only meet in person at work if it was reasonably necessary to do so, and that they should maintain social distancing.

That meant staying two metres apart if possible, or one metre apart with other measures being taken to reduce risk.

It also recommended holding meetings outdoors when possible, and using ventilation such as air conditioning and open doors and windows, if meetings had to be indoors. The guidance did not mention alcohol.

Was there guidance for campaigning?

The government issued extra guidance for campaigning ahead of the May 2021 elections.

It said that while it was "essential that campaigning be allowed in the run-up to the polls" on 6 May, "all campaigning activity will need to follow the relevant rules on gatherings and social distancing".

It also recommended: "You should not meet with other campaigners indoors."