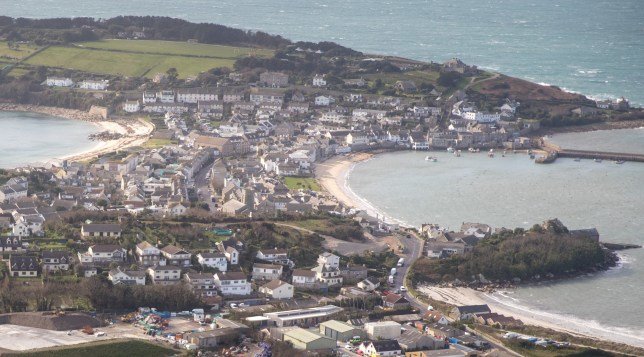 Just 2,000 people in England will have the freedom to go to the pub from tomorrow as all bar one part of the country is plunged into tier three and four restrictions.

The coastal location has a population of just over 2,000 and has been in tier one since the system was introduced.

In a huge blow to the hospitality industry it means all pubs except those in Scilly will be forced to close from tonight, though they can open as takeaways.

Mr Hancock said the draconian measures were ‘absolutely necessary’ to bring down rising hospital admissions fuelled by a more infectious strain of the virus spreading across the country.

A total of 44 million people will be in tier four from New Years Eve, or 78% of the population of England, while 22% will be living under tier three rules.

Mr Hancock said: ‘I know that tier three and four measures place a significant burden on people, and especially on businesses affected, but I am afraid it is absolutely necessary because of the number of cases that we’ve seen.’

The UK has recorded 981 deaths in the past 24 hours, the highest figure since April. There are now more patients in hospital than during the Spring peak, with doctors warning ICU wards are filling up and hospitals are running out of oxygen.

Ambulances were queuing outside hospitals in London and Birmingham last night as hospitals reached breaking point, while ICUs in the capital have asked major hospitals in Yorkshire to take patients in need of intensive care.

‘The threat to life from this virus is real, and the pressures on the NHS is real too,’ Mr Hancock said.

Areas being moved up to tier four include all of the North East, Cumbria, Cheshire, Warrington, Greater Manchester and Lancashire.

They will be joined by most of the West Midlands and all of the East Midlands, except Rutland, as well as areas in the South-East not already under the stay-at-home orders. 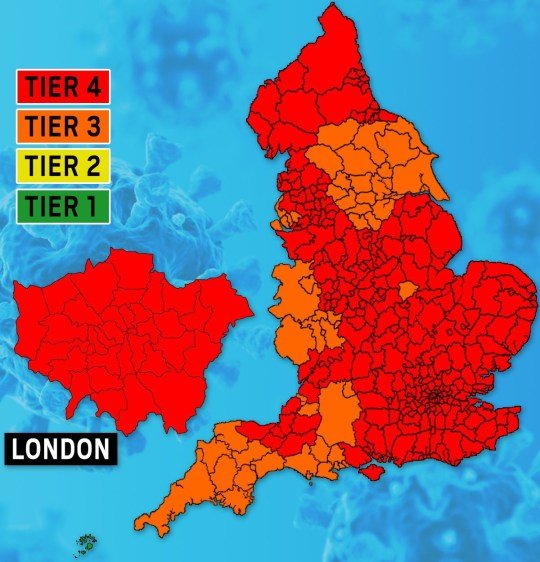 Three quarters of England will be under tier four from tomorrow

Under the rules of tier four, non-essential shops, all hospitality venues, gyms and leisure centres have to close and people can only leave their homes for essential reasons.

In tier three, gyms, hairdressers and non-essential shops can stay open and groups of up to six can meet outside.

The latest measures follow the approval of a Covid vaccine from Oxford University and AstraZeneca, with the first jabs expected to be given on Monday.

Boris Johnson has said he hopes the UK will be able to relax Covid restrictions before April, so long as the tier system and vaccines help ‘drive down the virus’.

Speaking to ITV’s Robert Peston about how long the new rules will last he said: ‘I am not going to give a deadline, but you’ve heard what I’ve said about April, that is the terminus ante quem, if, and it’s a big if, the tiering can work to bring the virus under control.

‘If the vaccine rollout proceeds fast enough and we are able to inoculate, to protect those millions talked about, those vulnerable groups, then there is a world in which that date can be brought forward by who knows how many weeks. But that’s obviously what we’re aiming for.’