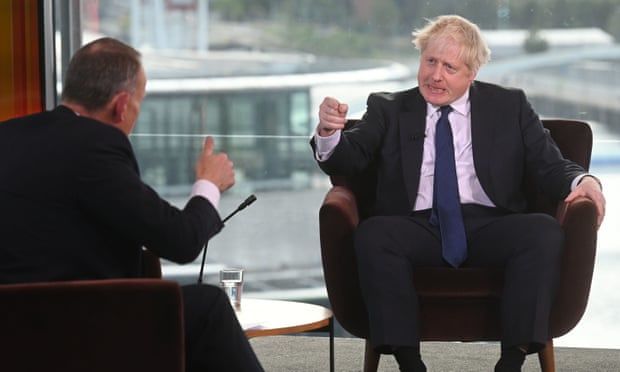 PM made a number of assertions in his Andrew Marr appearance, but how accurate were they?

In the traditional pre-party conference broadcast interview, Boris Johnson was grilled by the BBC’s Andrew Marr. Here are some of his key points – and a check on their accuracy.

"There’s even a shortage of truck drivers in China, there’s a shortage in America and in Poland.

While Johnson is correct that the haulage industry faces long-term recruitment and retention issues in many places, the counter-argument is that no other countries – and not even Northern Ireland – have seen such a sudden supply chain crisis, notably at petrol stations. In response to this question, Johnson said there was “a particular problem to do with demand in this country” when it came to fuel. However, elsewhere in the interview he also said: “The issue at the forecourts is fundamentally one of supply.” So it is not completely clear what his argument is.

Who is paying most under the national insurance rise

This was Johnson’s response to questions by Marr about the increase in national insurance rates to tackle the post-Covid NHS backlog and assist social care. However, there does not appear to be any published data to back up Johnson’s claim, with banking organisations unable to point to any.

According to one report by PwC, the total taxes borne by the banking sector were highest compared with any other UK industry in 2020, accounting for about 30% of private-sector receipts. However, the survey did not provide a breakdown by tax type, nor did it provide any forecasts regarding the national insurance increases.

The Treasury was not immediately able to provide supporting analysis. The question was put to the Conservative press office.

Wages are rising for low-paid workers

"Wages are finally going up for the low-paid and they’re going up faster by the way than they are for those on high incomes. And about time too.

The section on wages prompted a disagreement between Johnson and Marr, with the latter saying official statistics for the three months to July, the most recent, showed that wages were not keeping pace with inflation from the year before, meaning they had fallen in real terms. The prime minister vehemently disagreed. The answer seems to be that it depends what statistics are used. An Office for National Statistics study did say median weekly earnings remained unchanged from a year before, giving a real-terms cut. But other statistics show much faster wage growth – although some of this is down to a reduction in the number of lower-paid jobs due to Covid.

Violence against women and girls

The specific framing of this statement makes it hard to prove or disprove but Johnson’s eight-year tenure as mayor was not always seen as a success when it came to tackling violence against women. He launched the strategy in 2013, in his second term. Previously, Johnson faced criticism for not delivering on a promise made before his first election to spend more on rape crisis centres – and he admitted himself that provision had been “patchy and inconsistent”.