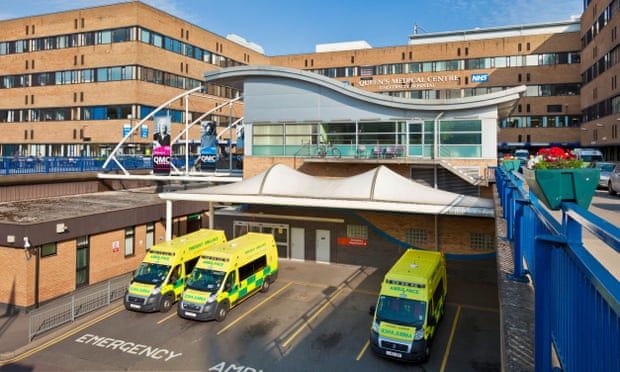 Every day brings reminders of how permanently under-resourced the NHS is: a ward closing here because there are too few nurses, a queue of ambulances – each with a patient in the back – stuck outside an overstretched A&E there.

On Thursday it was Nottingham and Nottinghamshire. Health services are under such pressure in the area that its hospitals and NHS clinical commissioning group spelled out in dramatic terms the impact of so many people needing care. On Monday more than 1,100 patients sought A&E help at the Queen’s medical centre and King’s Mill hospital in Nottingham and Mansfield, often for minor complaints such as coughs and colds or – in one case – seeking the removal of false nails.

“As a result of A&E being full patients are experiencing long waits,” local NHS bodies said in a joint statement. The same hospitals are also treating 200 Covid patients, 26 of whom are critical. As a result, said Dr David Selwyn, the King’s Mill medical director, only those with a “major, life-changing illness” should come to A&E. They also appealed to families to help them to free up hospital beds by agreeing to support relatives when they get home. 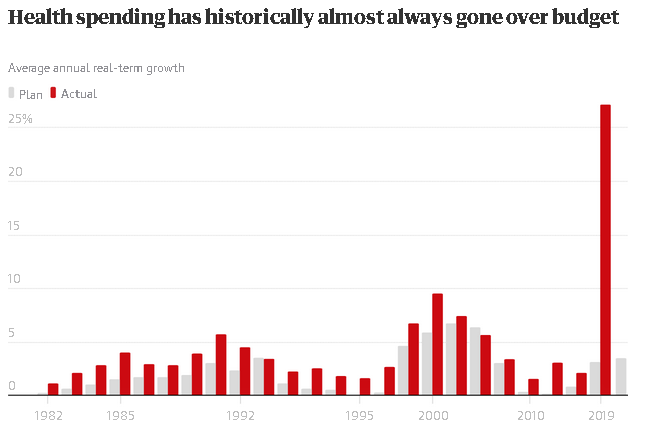 Source: IFS data shows autumn statement, budgets or spring review. Data for some years was unavailable and covers the UK up until 1998 and England only thereafter

A health system with enough staff and space could cope with such demand. But the NHS’s persistent understaffing and ageing estate means it cannot, or not easily. Those two factors also help explain why the waiting list for hospital treatment in England keeps spiralling and on Thursday hit a new record of 5.61m. Long waits were increasingly common before the pandemic; the Covid-driven shutdown of NHS care has just made things worse.

Boris Johnson claims the NHS in England will get an extra £10bn a year for the three years starting next April. But the Institute for Fiscal Studies thinktank disputes that. It says the cash Johnson pledged on Tuesday when he unveiled a 1.25% rise in national insurance amounts to £6.6bn next year, £3.6bn in 2023-24 and £5.6bn in 2024-25 more than already planned under the five-year funding deal Theresa May agreed in 2018.

Johnson believes his largesse towards the NHS will go a long way. It would “fix the problems in health … governments have avoided for decades”, pay for “the biggest catch-up programme in the history of the NHS” and fund “better care” and “better screening equipment” among other things, he said. The attack on the backlog will increase hospital capacity by 10%, provide 9m more appointments, scans and operations, and result in 30% more patients being treated by 2024-25 compared with now, all paid for by the new “health and social care levy”, he promised.

He did not say the money would solve every problem but was upbeat about its impact. But then, prime ministers always are when they splash the cash on the nation’s favourite institution. There is some evidence that doing so yields results: Tony Blair and Gordon Brown managed to vanquish horrendous treatment delays and build many new hospitals.

But there is little reason to believe that Johnson will see the same positive dividend, especially when it comes to the backlog, which he sees as the main priority. Since May gave the NHS £20.5bn more by 2024, the backlog has grown, waiting times have got worse, staff vacancies have remained stubbornly close to 100,000 and precious few new facilities have opened.

There is the sheer scale of the backlog, described as “gargantuan” by the British Medical Association. Already at 5.6m, and growing by 150,000 a month, it could end up at 13m, the health secretary, Sajid Javid, has admitted. If the NHS cannot deliver care for many of the 5.6m within promised waiting times, it will be even less able to do so as the numbers rise. Long waits involve pain and anxiety for patients, frustration and concern for their doctors and nurses – and political risk for Johnson.

Getting the numbers down to acceptable levels depends on far more than money. Expanding hospital capacity by 10% and treating 30% more patients sound great. But is either deliverable? Hospital bosses say privately that unless there is a significant and rapid expansion of both the NHS’s workforce and its cramped, often creaking facilities, such pledges are unrealistic and treatment queues will become endemic.

But there is no plan for the first, and only a dubious promise to build “48 new hospitals” by 2030, and both would anyway require even more money, which the Treasury may baulk at providing. Given these constraints, the prime minister’s visible desire to banish the backlog may well remain wishful thinking.