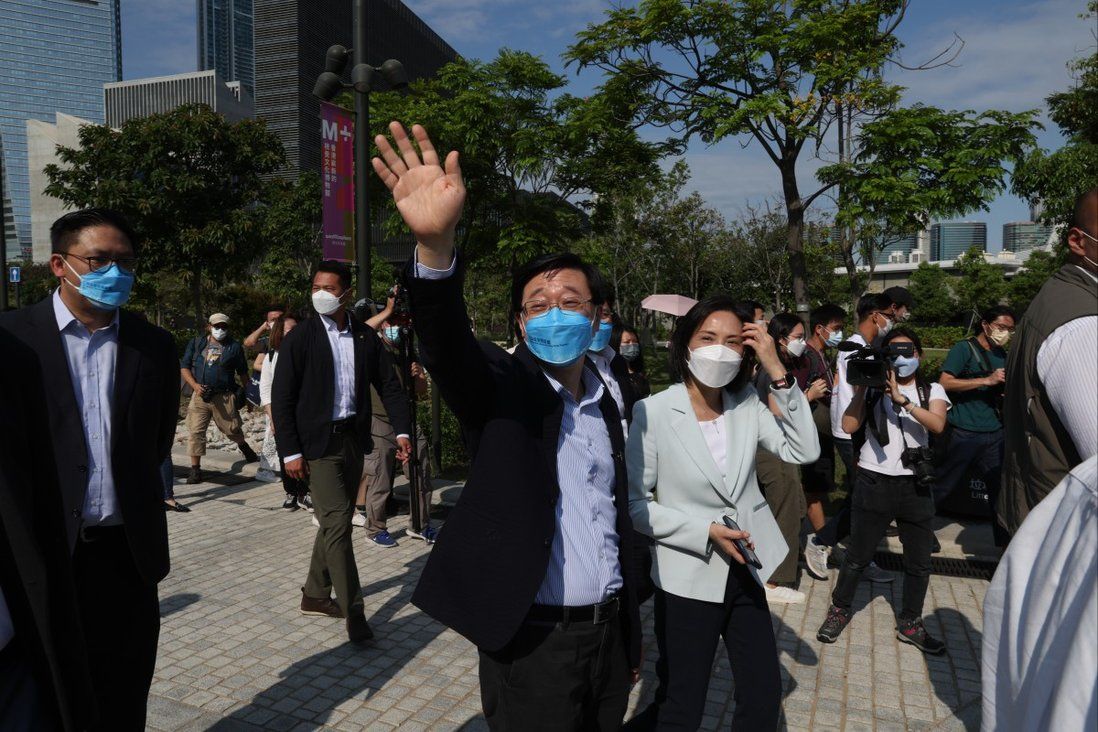 Beijing can afford to ratchet down the threat level with John Lee at the helm. It’s time to expand the discourse from patriotism, bring in the disenfranchised and flesh out policies with a game plan to secure Hong Kong’s future.

As the dust settles, a lone rider has emerged from the haze. He was duly anointed by the central government’s liaison office, thus saving a beleaguered Hong Kong from the onerous task of picking a chief executive. John Lee Ka-chiu was the sole candidate in the election and is now chief executive-elect. Case closed.

Lee has a tough image that would not be out of place in a reimagined Marlboro ad. He set out on a career with the Royal Hong Kong Police Force in 1977, steadily making his way up to secretary for security, before being elevated to the city’s No 2 spot as chief secretary. He has seen both sides of the coin.

Despite misgivings among the city’s rudely defenestrated democratic rump, he carries the sort of no-nonsense credentials reassuring to a mainland battling a range of distracting issues from Ukraine and Taiwan to Covid-19. Yet few in Hong Kong have much idea about his political bent or thinking.

Will he simply provide tough stewardship for a flustered city? Or does he have an alternative vision? Will he further Carrie Lam Cheng Yuet-ngor’s master plan for an ambitious hi-tech Northern Metropolis, that sparkling gift of an IT necklace for Shenzhen, fusing the energies of these twin cities to power the Greater Bay Area development?

Whatever the emotions and calculations, Lee’s arrival offers the possibility of change, a new beginning. And it is this that must now be the city’s singular focus.

After years of what looked to be a slow death by a thousand protests and bureaucratic blunders, here is the prospect of a rock-solid start with the backing of a nation set to become the world’s No 1 economic superpower by 2030.

This is no idle gobbledegook. It has less to do with China’s political posture and everything to do with the potential benefits of “stability”, a much maligned word today.

Critics will argue: “stability, at what cost?” They are right to be concerned. Headroom for free thought, imagination and criticism is important. Yes-men have proved to be the downfall of nations throughout history. But China can ratchet down the threat level, having got all its ducks in a row with last year’s flurry of stern actions and a seemingly reliable helmsman.

With the city reading from the same script, it may be wise to expand the discourse from patriotism (the sole visible platform for many Legislative Council hopefuls at the last hustings) to fleshed-out policies and a game plan to secure the future of Hong Kong.

That the city has been brought back into the fold is beyond doubt. Whether this is in line with or ruffles the Basic Law is moot. It is a fait accompli and the political leadership must start focusing on the things that will make Hong Kong a must-do city again.

The “world city” boast has long rung hollow with core competencies focusing excessively on finance and a real estate sector profoundly bereft of imagination – each new luxury monstrosity proclaiming itself to be X on The Peak: Son of The Peak, Return to The Peak, and so on, regardless of location. While perhaps irrelevant to the larger picture, it is this sort of mindlessness that threatens to sink this once-vibrant city.

There is an opportunity now for Lee to reach out and bring in the disenfranchised to power the new engine. As in any corporation, you cannot achieve results with half your staff disillusioned, upset, emigrating or locked up. They need a stake in the future, too, and Lee will need to show that he is a leader for all of Hong Kong.

This is a time to unify the special administrative region to create the energy needed to reinvent itself. Hong Kong has to once again learn how to attract talent and it needs to diversify and urgently develop education (a true futures stock), medical research, technology, services (its trump card), the green economy, public housing and thought leadership (something even a paternalistic Singapore has flirted with).

With the city’s track record in virology, after its experience with severe acute respiratory syndrome (Sars) catapulted it to centre stage, it could consider becoming a centre for the development and production of cutting-edge vaccines. Covid-19 has vigorously spotlighted this need.

The Northern Metropolis will allow sufficient space for this sort of integrated development within an ecologically green framework, the environment being another area where the city could work harder to build a good head of steam. It’s time Hong Kong ceased to be a one-trick pony.

For any of this to happen, the education sector must be vigorously funded and encouraged to expand to include the broader region both in terms of syllabuses (and general knowledge) and to export valuable service skills.

Lack of English (not fully appreciated while Britain was running things) has greatly hampered international vision. Mandarin is, of course, a must. With proficiency in three languages – the norm in Europe and much of Asia – citizens will once again have a fair crack at taking the lead as a true world city.
#vaccines  #covid 19  #covid
Add Comment