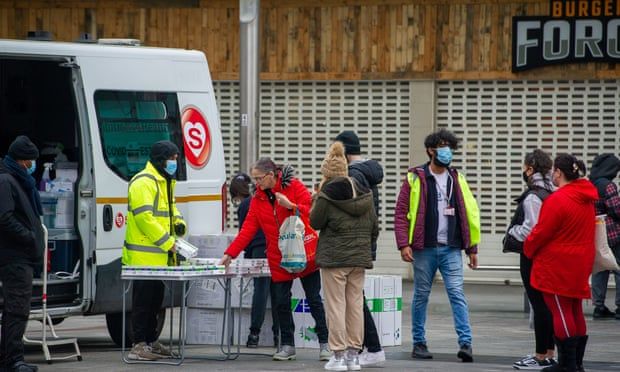 The health secretary, Sajid Javid, is being urged to ensure NHS workers are prioritised for Covid tests or risk a “devastating” impact on patient care, after conceding to MPs that the supply of lateral flow kits would have to be “constrained” over the next fortnight in light of rocketing demand.

The British Medical Association (BMA), which represents doctors, warned that the system for ensuring NHS staff receive tests was “not working”. It said its members were reporting problems with obtaining PCR and lateral flow tests, despite healthcare workers supposedly being given priority for both.

The BMA’s chair of council, Dr Chaand Nagpaul, said: “Being unable to get the tests means staff may not be legally allowed to work and, at a time of acute workforce shortages and winter pressures, this could be devastating for the care that can be given right across the NHS.”

Demand for tests has been surging in recent days, with new infections increasing rapidly and ministers, including the prime minister, Boris Johnson, advising the public to test themselves before attending New Year’s Eve parties or meeting vulnerable relatives.

Another factor boosting demand is that the self-isolation period in England was recently cut from 10 days to seven, but only with two negative lateral flow tests.

Official figures showed that 189,213 new cases were reported in the UK in the 24 hours to 9am on Thursday, and 332 people died within 28 days of a positive Covid test although this included hospital death figures from England since 24 December. NHS statistics showed 11,452 people in England were in hospital with Covid-19 as of the morning of December 30, up 61% in a week – and the highest number since 26 February.

Javid has acknowledged in a letter to MPs that the supply of lateral flow tests may have to be constrained over the next fortnight. “In light of the huge demand for LFDs [lateral flow devices] seen over the last three weeks, we expect to need to constrain the system at certain points over the next two weeks to manage supply over the course of each day, with new tranches of supply released regularly throughout each day,” he wrote on Wednesday night.

The shadow health secretary, Wes Streeting, has written to Javid calling on him to make sure healthcare workers are given priority. “I urge you to put the key workers we have relied upon for the past two years to the front of the queue and do everything you can to prevent a staffing shortage crisis in our NHS. The government must get a grip on this crisis, bring these shortages to an end, and ensure everyone can access tests quickly and regularly,” he wrote.

A Department of Health and Social Care spokesperson rejected the idea that healthcare workers had been unable to obtain tests, saying they had their own dedicated supply channel.

Azeem Majeed, a professor of primary care and public health at Imperial College London, said the government was “in part to blame” for the shortage of tests because of its advice to the public to test themselves before social events and outings.

“It has become very clear that there are nowhere nearly enough lateral flow tests for Covid-19 in England to allow the government’s policy of their indiscriminate use,” he said in an article in the Guardian.

He called for the publication of daily data on how many tests are available, and then “clear guidance from the government on what groups should be prioritised for testing and how frequently they should test”.

The Welsh government announced on Thursday that it had lent an additional 4m lateral flow testing kits to England to help alleviate the supply squeeze across the border, bringing the total offered to 10m.

The National Education Union (NEU) has called for teachers to be among the groups given priority, amid concerns about whether sufficient tests will available as the new term starts next week.

Mary Bousted, the joint general secretary of the NEU, said: “If schools are the top priority, as Boris Johnson has said they are, there is a case for teachers being a priority group so that they can test themselves, so they can be in school educating pupils.”

With all secondary pupils expected to be tested before they start the spring term next week, the Liberal Democrats have urged the education secretary, Nadhim Zahawi, to ensure every school has enough tests in place.

The Lib Dem education spokesperson, Munira Wilson, said: “Nadhim Zahawi must provide a cast-iron guarantee that every child and teacher who needs a Covid test will be able to access one on the first day of term, to avoid yet more disruption to schools next week. We cannot afford a repeat of last year’s fiasco when pupils returned for one day before being sent home again.”

A Department for Education spokesperson said the government had delivered 28m test kits to schools in the final two weeks of last term. “Schools and colleges use a different priority supply route to get their lateral flow tests. Most kits have already been received for the start of the new term and we have emergency arrangements in place to make sure every school has the testing it needs,” the spokesperson said.

One south London headteacher, Ben Roberts, of Heathbrook primary school in Lambeth, said his school had ordered tests from the DfE two weeks before the end of term and was yet to receive them. He said he had been touring local pharmacies trying to obtain test kits.

“We were expecting staff to go in for an inset day on Tuesday. If staff haven’t had a test prior to that, all we’re doing is super-spreading again. So I for the last few days have been trying every which way to get hold of any more.”

The Pharmaceutical Services Negotiating Committee (PSNC), which represents NHS community pharmacies in England, said some pharmacy staff were being verbally abused when stocks of lateral flow tests ran out.

Alastair Buxton, the PSNC’s director of NHS services, said: “Public demand for test kits remains exceptionally high and, despite UKHSA delivering some 2m tests to pharmacy wholesalers on some days, this is still falling short of demand. Members of the public being directed to pharmacies for tests are rightly frustrated when they cannot get them, but it’s concerning that some pharmacy teams say they are still being verbally abused when this happens.”

A government spokesperson said: “The NHS has additional stock of lateral flow tests and those who live or work in vulnerable settings have access to dedicated testing order routes. If at some point it is necessary to do so we will always prioritise protecting the most vulnerable as well as critical workforces, as we have done throughout the pandemic when it comes to vaccines, boosters, testing and other infection control measures such as PPE.”
#boris johnson  #vaccines  #covid 19  #johnson  #covid
Add Comment