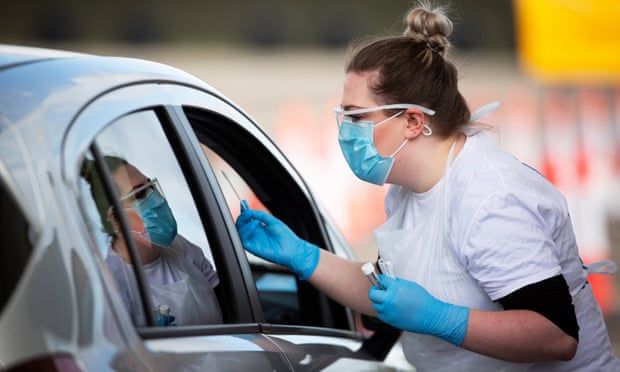 Isolate if you have Covid symptoms but negative PCR, says local health official

People should self-isolate if they have Covid-19 symptoms even if they have a negative PCR test result, according to a regional public health official, after a number of cases where people tested positive using lateral flow tests – but then negative with PCR.

Anomalies have been reported by people in south-west England over the past week, with one public health official saying they were aware of a “high number” of inconsistent test results, according to reports by the i newspaper.

The UK Health Security Agency (UKHSA), which replaced Public Health England at the start of October, said it did not believe there were problems with any testing kits and added that there was no evidence of a new variant.

Dr Zoe Price’s daughter Rosie was one of those who developed symptoms earlier this week. She had positive lateral flow test results, but then had two negative PCR tests.

The 14-year-old later spent a day in hospital after becoming dehydrated as a result of the illness.

Price, an A&E doctor from Bath, told the Guardian: “She became ill on the Tuesday and had a vomiting bug, and I think a few people have started vomiting and being off school. She did a lateral flow, and we thought, ‘It’s not going to be Covid,’ but it was strongly positive. And she did multiple ones, and they were positive, and so did some of her friends.

It was only when she was admitted to hospital that doctors gave her a “rapid PCR” kit, which finally came back positive.

Price, 42, added: “I was very bemused, I didn’t believe the PCR test results before because she had symptoms. Clinically, she had Covid, so I continued to assume that she had Covid.

“That will be my concern for other people, that they’ll be falsely reassured, despite having lots of positive lateral flows.”

A GP from south Gloucestershire told the BBC that she had seen patients in similar situations.

Becky Reynolds, the director of public health for Bath and North East Somerset council, told the BBC: “The advice is also to think about your local situation, do an individual risk assessment … so what is the likelihood that even though the PCR is negative, that you may still have Covid?

“If thinking it through there is quite a chance you have Covid, even if the PCR is coming back negative, then regard it as Covid and self-isolate.”

The UKHSA warned that no test is 100% accurate but said the chances of a false positive remain low.

Susan Hopkins, the chief medical adviser at the UKHSA, said: “We have been made aware of some areas reporting positive LFD [lateral flow device] test results with subsequent negative PCR tests and we are looking into the cause.

“If you get a positive LFD test, it’s important to make sure that you then get a follow-up PCR test to confirm you have Covid-19. If you have symptoms of Covid-19, self-isolate and take a PCR test. With any test, it is important to carefully read and follow the instructions for use on the test kit so as to avoid any incorrect readings.”
#covid 19  #covid
Add Comment