Workers at NagaWorld casino complex in Phnom Penh have pledged to continue their strike despite growing risk of arrest.

Before plainclothes police forced Chhim Sithar into an unmarked sedan within sight of the casino complex where she had worked last week, the Cambodian union leader had plenty of time to consider alternative courses of action.

The president of the labour union at NagaWorld had been sought by police for her role in leading a weeks-long strike and demonstration outside the pair of sprawling casino-hotel facilities in downtown Phnom Penh.

Sithar stayed away from the demonstrations, organising the unionists as she shuttled between safe houses to avoid detection from security officials. But as she prepared to rejoin the strikers last week, she also planned for her arrest.

“We already knew from the start that they would use these tactics to intimidate us,” Sithar told Cambodian media outlet VOD on January 3, explaining how she had taken steps such as cutting her hair short to make it more manageable in prison. “[Members] understand that if the arrests stop the strike, there will be no solution, so the strike must continue.”

Police arrested Sithar the next day as she joined the unionists where police had stopped them just outside the Australian embassy. Video captured by VOD and other outlets showed plainclothes officers grabbing Sithar by her limbs and dragging her to their car, fighting off unionists along the way.

The dramatic events marked the latest escalation in a strike that has resulted in the arrest of 30 people, nine of whom have been charged with “incitement to commit a felony”, since it began on December 18. 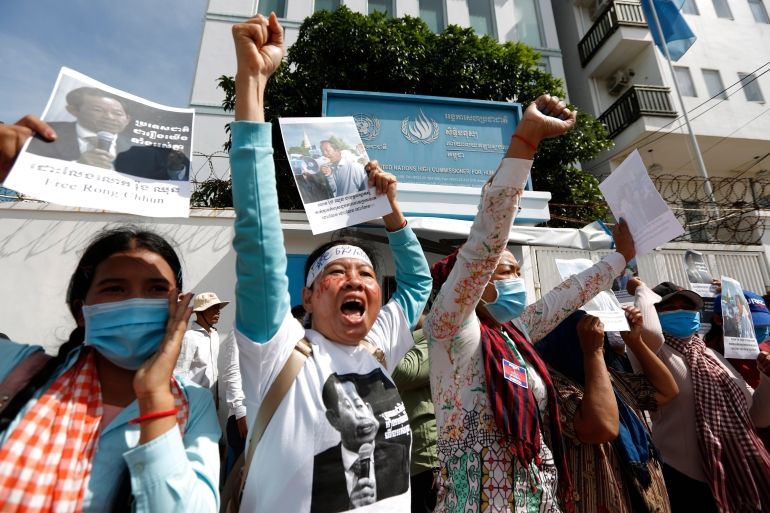 The strike stems from a labour dispute that began in April, when company management announced the laying off of 1,329 employees, about one-sixth of the workforce.

About 600 of the workers marked for termination, including Sithar, were union members whose employment is supposedly protected by Cambodian labour law except for in cases of serious misconduct.

Though most have accepted the terms of their dismissal, 312 holdouts have continued to fight their termination, arguing the process was improperly handled. Management refused to negotiate with the union throughout the layoffs, instead ordering employees to represent themselves in severance discussions.

Others have accused NagaWorld of not paying proper severance based on seniority and other factors. When months of attempted negotiations and the involvement of the Ministry of Labour and Vocational Training failed to produce results, the union announced on November 24 its intention to strike.

Although the workers’ grievances resemble those at many downsizing workplaces, the dispute at NagaWorld is being closely watched as a bellwether of Cambodia’s civil society, which has come under growing pressure since the country’s main political opposition was abolished in 2017 by order of the Supreme Court, which activists say is politically controlled.

Naly Pilorge, executive director of rights group Licadho, told Al Jazeera the treatment of the NagaWorld strikers was just the latest example of the authorities using criminal proceedings to keep a lid on dissent.

“No one who looks at this strike, of hundreds of mostly women union members peacefully gathering to demand their labour rights, can possibly argue that it threatens ‘national security’ or causes social disorder,” Naly said. “It’s absurd, and it reflects the government’s lack of tolerance for any peaceful assembly. Charges of ‘incitement’, filed against [nine arrested] unionists, are now used by the government to target anyone who dares to speak out against injustice in Cambodia – whether they are labour, environmental, political or human rights activists.”

At the news conference, which was closed to media outlets deemed critical of the government, police claimed the union had been funded by outside groups, intending to “incite social chaos”, a criminal charge often used to silence dissenters. As evidence of their claims, police displayed images of bottled water, strikers holding signs and a years-old image of Sithar with a female leader of Cambodia’s banished Cambodia National Rescue Party (CNRP) at a women’s conference.

Though ostensibly a private employer, NagaWorld enjoys a monopoly on gaming licences in Phnom Penh and is widely believed to be connected to the governing Cambodian People’s Party following a 2017 leak of purported phone messages between Hun Manith, a son of Prime Minister Hun Sen, and NagaWorld CEO Chen Lip Keong, a Malaysian national with Cambodian citizenship.

Despite the pandemic-related downturn, its Hong Kong-listed parent company NagaCorp is currently funding the construction of a third multiuse complex at an estimated value of $4bn near the others in Phnom Penh.

Though Cambodians themselves are legally prohibited from gambling, the publicly listed casino company boasts a powerful place in the world’s gaming industry, thanks in large part to a formerly bustling trade from Chinese junkets and VIPs.

By the time of the layoffs, the casino had weathered a year of relatively sluggish business due to the collapse of its stream of foreign clientele. NagaCorp reported $102m in profits in 2020, down from $521m the previous year and $1.47bn in 2018.

Cambodia largely avoided serious outbreaks of COVID-19 for the first year of the global crisis, but was inundated with the Delta variant last February, prompting authorities to temporarily close NagaWorld and the rest of the country’s casinos.

As the company’s fortunes grew, the NagaWorld workers’ union had proven to be an effective bargaining force in previous clashes with company management. In September 2019, Sithar was indefinitely suspended from work while advocating for better working conditions and higher wages. The union went on a two-day strike in January 2020 and won Sithar’s reinstatement, plus wage increases for staff.

NagaWorld has maintained a public silence throughout the dispute. Company representatives did not respond to a request for comment from Al Jazeera.

Since the strike began, plainclothes police such as those that dragged Sithar away this week have hovered at the margins of demonstrations, filming unionists, journalists, human rights observers and other bystanders with their mobile phones.

Police began making arrests on New Year’s Eve, when the unionists planned to protest until the stroke of midnight.

Unionists have been undeterred by the arrests. On Thursday, a crowd of about 500 gathered as they had for more than two weeks prior to sing, chant and cheer. Many held signs calling for their colleagues to be freed from prison.

At Thursday’s protest, Som Sophea, 50, told Al Jazeera she had worked as a cleaner at NagaWorld for 26 years, starting at a salary of $80 per month in the company’s earliest days, when it operated out of a ship moored in the nearby Mekong River. Sophea said she had been among the April layoffs, but refused to accept the severance offered by the company.

She said she was “heartbroken” at the recent arrests.

“However, I’ll still continue keeping up the strike,” she said. “I want Naga to sit and negotiate with our union representatives.”

NagaWorld’s union has been striking since last month

The union’s turn to direct action last month came after official labour dispute mechanisms failed to find a resolution. In September, Cambodia’s Arbitration Council declined to issue a decision on the layoffs, instead requesting the Labour Ministry to resume an already months-long probe into the situation at the company.

The Labour Ministry has held negotiations between unionists and management while urging the strikers to end their action. A ministry spokesman referred Al Jazeera to a press release asking demonstrators who were laid off to verify they had received correct severance.

NagaWorld representatives on December 24 said they would bring the question of reinstating the holdouts to the board of directors, although it is unclear if that ever happened.

Khun Tharo, a programme coordinator with labour rights group Central, told Al Jazeera it was “wholly unreasonable” for the government to expect the demonstrating workers to go home to await a resolution.

“NagaWorld workers have been waiting for more than six months already,” Tharo said. “It is in everyone’s best interests that the strike ends but NagaWorld workers need to be provided with an acceptable resolution before that can happen.”

Tharo said the strike had been peaceful until police started arresting union members.

“The entirety of the Cambodian independent labour movement is standing in solidarity with NagaWorld workers,” he said. “These sorts of attacks will only serve to strengthen our spirit, not weaken us.”

Despite the clear legal threat following the arrests, union members have pledged to take to the streets until their demands are met.

Ket Pronita, a union member at Thursday’s protest, told Al Jazeera she had joined the action despite keeping her job because she saw the layoffs as an existential threat to the union.

“I don’t want to leave without any justice for this, which is also for the next generation who want to work here. If we do not take action now for new workers, they will end up like us here,” Pronita, 35, said.

“I’ll keep coming by my heart until we have no power [to do so], or only one person is left to come.”