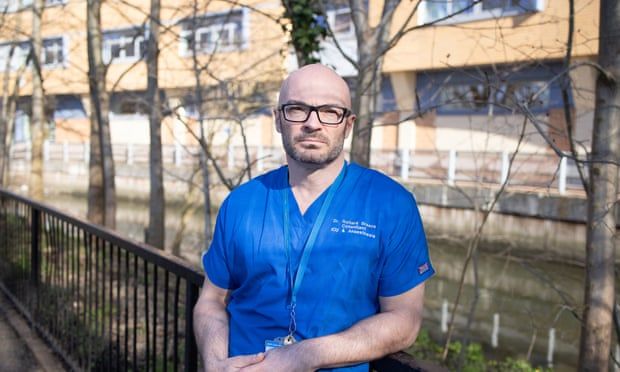 Boris Johnson announced in parliament that £36bn raised by the new 1.25 percentage points tax rise would “go straight to the frontline” of health and social care. We asked some of them – doctors, care workers, managers and families of people in care homes – for their reaction.

Dr Richard Breeze, an intensive care consultant in London, said that “superficially [the new funds] sound wonderful and one hopes it’s a genuine investment in the NHS”. But he said it was “illogical” to be raising the funds from relatively low-paid NHS staff, who would feel disincentivised as a result.

“The lifeblood of the NHS will be compromised,” he said. “Going into what looks like a third wave [of Covid] the staff are exhausted and the idea of putting their taxes up is robbing Peter to pay Paul.”

He said the threshold for paying the tax should be raised for health and social care staff to prevent the lowest paid from paying the levy.

“We are desperately short of nurses and anything that can be done to incentivise them would be priceless.”

Documents setting out details of spending showed £5.6bn extra would go to social care over three years, including some to cap lifetime care costs at £86,000. It is well short of the amounts estimated to be needed to keep up with demand.

Lesley Lightfoot – whose mother, Blumah Samuels, 90, sold her £260,000 flat to pay for £4,300-a-month care fees at the care home she has lived in for almost three years – said the lack of significant new investment in the care sector meant little change for families’ experience of lower-budget care homes.

“Families who have a property to sell will be in the same position and God help people who haven’t,” she said. “It is not going to make a difference. What needs to be addressed is the standard of care. [Care work] needs to be a proper job.”

She also said the statement lacked a “sense of urgency” with the £100,000 cap on care costs not introduced for another two years and only then for people starting care packages after October 2023.

“What is going to happen to the people still at home who need help right now?”

“Let’s try and think we are heading in the right direction,” she said, “but social care is struggling so much. We have gone through such difficult times over the last 18 months. We are doing our recruitment drives and people are not coming through. They are going to have to invest. These figures are nowhere near what we need. I find it quite disheartening at times.”

Andrew Trehearne, who last month quit a job as a home carer in Oxford which paid just £75 for a day that would span up to 14 hours, said: “What shocked me was there’s precious little to help carers to stay in the business. This isn’t a plan, for goodness sake. The people I worked with were dedicated to the cause but this is not going to help them.”

Trehearne was one of hundreds of thousands of home care workers who often only get paid for 30 or 45 minute sessions when they are working with people in their homes, with travel time and breaks unpaid.

“There should be better pay and training but I have not seen anything like that,” he said. “We are utterly exhausted emotionally and physically.”