Former Health Secretary Matt Hancock has taken part in his first Bushtucker Trial for the show I'm A Celebrity.

Hancock, whose appearance in the programme while a serving MP has been condemned, took part in the challenge with comedian Seann Walsh.

Ahead of the trial being aired on ITV on Wednesday a letter was sent to some of his constituents in West Suffolk.

In it he says there are few places "politicians can speak candidly to the nation."

The announcement that he was taking part in the reality show has already led to him being suspended as a Conservative MP but he will continue as an independent.

In the trial insects and slime are poured over him as he crawls through a tunnel and he and Walsh search for stars to win meals for their campmates.

Hancock seems to struggle telling hosts Ant and Dec: "I can't find any stars" but is not heard saying the catchphrase "I'm a celebrity, get me out of here!" which would allow him to abandon the challenge. 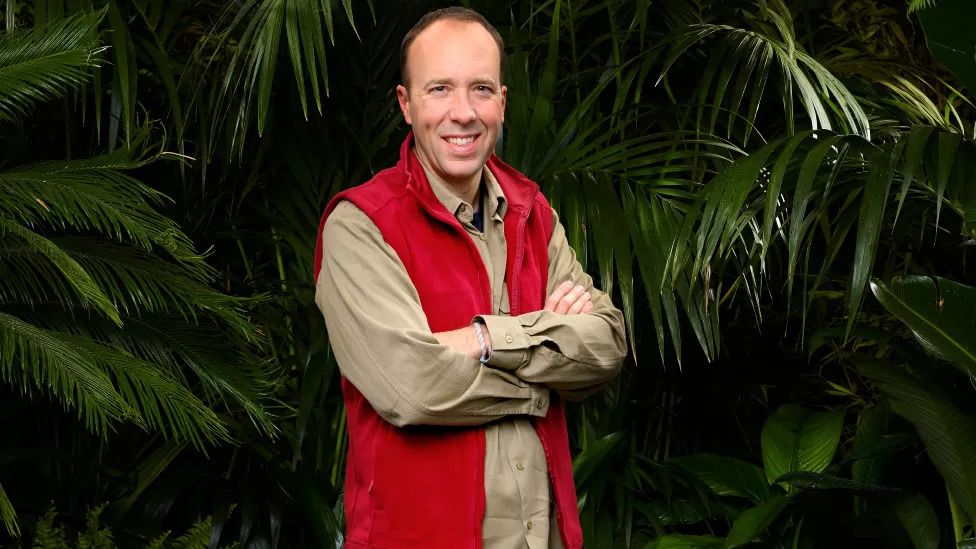 Hancock's entrance was teased by Ant and Dec on Tuesday night's episode
Walsh is heard shrieking as more insects land on him from above.

The pair are taking part in their first trial without any public vote as an initiation challenge on entering the camp in Australia.

After being widely criticised for his participation in the show, Hancock said he would donate some of his fee to charity and that he hoped to use his time in the jungle to raise awareness for his campaign to support people with dyslexia.

In a letter being sent to some of his constituents, Hancock said: "There are many ways to do the job of being an MP… Whether I'm in camp for one day or three weeks, there are very few places people will be able to see a politician as they really are and where politicians can speak candidly to the nation."

He added that he "fully understood" constituents' concerns and how there were those who did not think he should be on the show.

There was further criticism of Hancock during Prime Minister's Questions on Wednesday.

As MP Neil Coyle was being heckled from the Conservative benches, he suggested Tory MPs could "go eat kangaroo testicles" in a reference to Hancock's involvement in the show.

Hancock, who resigned as health secretary last year after breaching Covid social distancing guidance by kissing a colleague, has entered the jungle after spending a period of time in isolation.

The latest series of I'm A Celebrity launched on Sunday, with Coronation Street's Sue Cleaver, singer Boy George and footballer Jill Scott among the contestants.

A spokesman for Hancock said: "Matt will be making a donation to St Nicholas Hospice in Suffolk, and causes supporting dyslexia - including the British Dyslexia Association, off the back of his appearance.

"He will, of course, declare the amount he receives from the show to Parliament to ensure complete transparency, as normal."
#covid  #ant