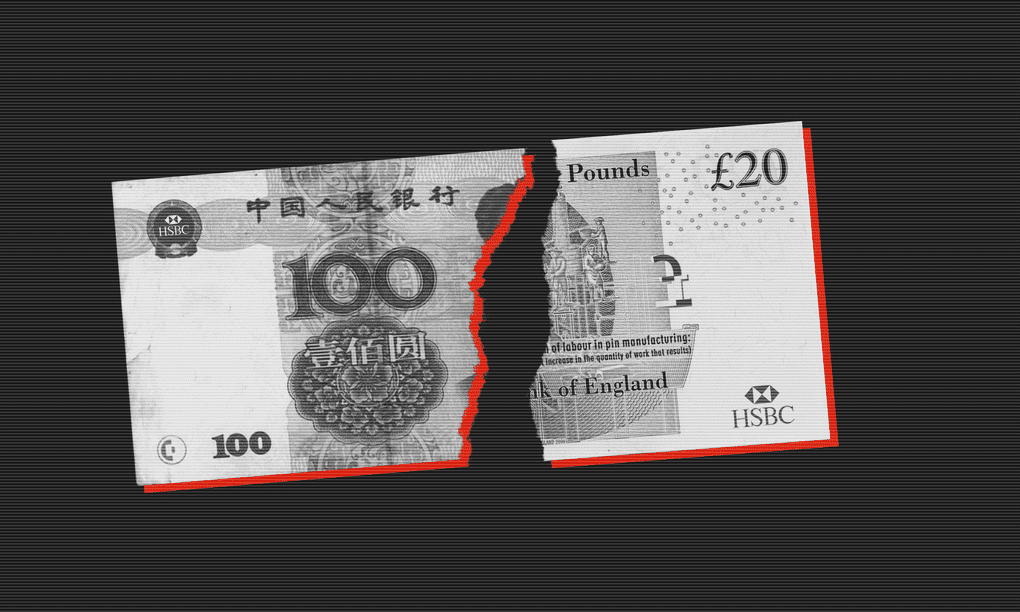 HSBC has been a fixture of the Hong Kong economy for more than a century. However, its origins as a financial bridge between Asia and the west have placed it in the centre of a modern day geopolitical storm. Facing pressure to choose sides as Hong Kong is convulsed by the new security law imposed by Beijing and Donald Trump pursues a trade war with China, HSBC is in danger of finding itself without friends in either direction.

Headquartered in London, but dependent on Hong Kong and China for profits, HSBC has been affected by tensions between Washington and Beijing – and shareholder concern over its controversial acceptance of an authoritarian crackdown in its key market.

Last week that high-wire act was thrown into sharp relief when, despite HSBC’s public overtures to Beijing, a Chinese state-run newspaper reported the bank could be included on an official list – as yet unpublished – of ‘unreliable entities’ that threaten the country’s sovereignty. Concerns over that threat were alleviated on Monday when the Chinese insurer Ping An, its largest shareholder, delivered a vote of confidence by increasing its stake in the bank – allowing HSBC’s shares to lift from a recent 25 year low.

Nonetheless, HSBC is struggling to navigate the politics of modern Hong Kong – and its image has paid a price for its decision in June to publicly support the controversial security law for the territory.

David Kynaston, a historian and author of ‘A Lion Wakes: A Modern History of HSBC’, said it was a shock move by a bank that has traditionally shielded away from politics. “It was still a very unprecedented thing for them to do. And they also, I suppose, had to make the calculation … given that they get a significant share of their profits from Hong Kong itself” he said.

Hong Kong, where HSBC employs around 30,000 of its 235,000 staff and makes more than half its profits, is the bank’s lifeblood and origin story. HSBC’s Scottish founder, Sir Thomas Sutherland, envisioned a Hong Kong based lender that would finance trade between Europe and Asia when he launched the bank in 1865. In the century-plus that followed, the Hongkong and Shanghai Banking Corporation (HSBC) became a global lender as it bought rivals in the US and Europe, and shifted its head office to London as part of its takeover of Britain’s Midland Bank.

However HSBC’s international commitments are now being tested, as it finds itself caught in the middle of a trade row between Washington and Beijing, and the target of outrage over China’s tightening grip on Hong Kong. This could have material consequences for a bank that plans to expand further in Asia – the source of around 85% of its profits – and generate more income from managing the assets of China’s burgeoning class of affluent citizens.

The US secretary of state, Mike Pompeo, is among the politicians trying to force HSBC’s hand. He has launched repeated attacks on the bank since June and accused of a “corporate kowtow” to Beijing amid a Chinese crackdown on pro-democracy protests.

Those words carry the threat of severely damaging action for HSBC. In July, Trump signed the Hong Kong Autonomy Act, which gives America the power to punish financial institutions that transact with officials and organisations supporting the security law. If, for instance, HSBC is punished under the act and the US withdraws the bank’s license for dollar clearing, handling payments in dollars, which is vital for an international bank like HSBC, it would be in deep trouble.

Pompeo’s broadside came after HSBC publicly backed the launch of China’s national security laws in Hong Kong in early June, just days after Hong Kong’s former leader CY Leung criticised the bank for failing to take a stance on the legislation. Those laws are aimed at quashing long-running protests in Hong Kong by banning any activities said to endanger China’s national security including separatism, subversion and terrorism.

HSBC revealed via the Chinese social media platform WeChat that its Asia Pacific chief executive Peter Wong signed a petition supporting Beijing’s new rules. HSBC said: “We respect and support laws and regulations that will enable Hong Kong to recover and rebuild the economy and, at the same time, maintain the principle of ‘one country, two systems’”.

It represented a marked shift in tone from the early 1990s, when China was a lesser economic power and HSBC decided to shift its headquarters to London, shortly after the killing of hundreds of protesters in Beijing’s Tiananmen Square in 1989. The shifting of gravity was officially done at the request of the Bank of England following the Midland deal, but the attack on student democracy protesters in Tiananmen made it less likely that HSBC would be criticised publicly for the move.

Over thirty years later, HSBC is facingcriticism for backing Beijing’s national security laws and putting profits first. Within days of Wong’s ink drying on that controversial petition, HSBC was censured in a letter by Labour frontbenchers, who warned that HSBC could face boycotts.

The British foreign secretary, Dominic Raab, later reprimanded HSBC for supporting the law, saying that the rights of the people of Hong Kong “should not be sacrificed on the altar of bankers’ bonuses”.

“If companies make political statements, they must accept the corporate responsibilities that follow,” he said, adding that he expected HSBC and fellow British lender Standard Chartered – which has also been caught in the geopolitical crossfire – to speak out publicly if there are any abuses of democratic freedoms as a result.

But HSBC has not been handed a free pass from Beijing either. In late July, HSBC was forced to rubbish claims by Chinese state media that it had framed its technology champion, Huawei, and had been an accomplice in US efforts to arrest its chief financial officer, Meng Wanzhou, in Canada in late 2018. The bank has said it handed over documents to the US Department of Justice only after it was ordered to do so.

Some of HSBC’s Hong Kong investors – who hold around a third of HSBC’s shares –have also grown weary of the UK’s grip on the lender. In April, a group of the territory’s investors threatened legal action against HSBC after the Bank of England forced UK lenders to cancel dividends due to the Covid-19 crisis. It led to repeated public apologies from HSBC’s chief executive, Noel Quinn.

This month also brought a reminder of HSBC’s troubled recent history when it was named in a journalistic investigation into banks that had notified US authorities of suspicious transactions. HSBC said the information contained in the leak was “historical” and pre-dated a settlement with the US Department of Justice in 2017. Indeed it was this leak, and not the ongoing wrangles over Hong Kong, that brought HSBC’s shares to multi-decade lows this month.

Kynaston said HSBC is clearly torn between its Hong Kong base and its need to maintain links elsewhere but that it is unlikely to make any hasty decision on whether to pull the plug on its eastern or western operations – a trait which the historian chalks up to the lender’s “stubborn streak”.

“Given that things are pretty febrile in Hong Kong, I suspect there’ll be quite a strong instinct to sort of try and ride out the storm and make placatory noises all around and, you know, hope things quieten down.”

Amid the coronavirus crisis, HSBC may have an economic justification for standing still. “We’re in an extra uncertain world at the moment. I can’t see there being much appetite for very fundamental decisions” Kynaston said.