The government insists reopening as soon as possible is on the cards, but many over-the-top pandemic restrictions remain, to the detriment of our economy. We should take John Lee’s advice and not fixate on ‘0+0’ but instead dispense with the city’s restrictions altogether.

Because we live here and have grown accustomed to the package of control measures, we have grown numb to the comprehensiveness of them and the extraordinary degree to which they have affected our daily lives.

Our testing rules are bizarre: every schoolchild every day, workers in many industries several times a week, one before we board a plane to return home and an incredible nine in the first week after arrival, down from 11 as of today. Registering our presence and confirming vaccination status on entry to many types of premises. Compulsory wearing of masks everywhere, even outdoors, unless exercising. How strange this package must seem to outsiders.

We cheered when, soon after taking office, the present administration scrapped the flight suspension mechanism. Why was it ever introduced? How did it survive so long?

We cheered again when the draconian quarantine arrangements were unwound. But the price of these concessions was more testing, and introduction of the notorious banquet RAT rule.

The underlying philosophy of such a system can mean only one thing: deep in their hearts, the members of the chief executive’s panel of expert advisers believe “zero Covid” is achievable. I have described them before as high priests of a fundamentalist religion.

Despite all evidence to the contrary, they seem to believe it can be done if only we are more devout and try even harder. Perhaps if everyone could be persuaded to test themselves every day, register their presence everywhere when not at home or wear masks 24 hours a day, even when alone in bed at night. Yes, we’ll show the whole world the superiority of our religion.

Faced with such an approach, many ordinary citizens are finding ways to subtly dissent. People testing positive decide not to report, just stay home for a few days until recovery. The same RAT result can be used several times, with only the date being amended.

I see increasing numbers of people on the streets whose masks have slipped down below their nose, or even their chin. That is not to mention the patchy compliance in the government stadium at the Rugby Sevens. This kind of civil disobedience is not healthy as it implies loss of respect for the administration.

Where do we go from here? Chief Executive John Lee Ka-chiu insists the direction is clear and the government will ease up further as quickly as possible while keeping the pandemic situation manageable.

Yet already one of the government’s advisers has said masks should stay on throughout the winter because of the danger of a flu outbreak, and the situation could be reviewed next summer. This sounds like what we were told this time last year.

It’s more goalposts on the move, like the vaccination threshold. Lee has endorsed this approach at least in respect of the flu season. What this means in practice is no tourists until the middle of next year at the earliest.

Paradoxically, it is the prolonged wearing of masks for almost three years which could put Hongkongers at greater risk from flu. By being so prudent in the interests of safety with respect to one virus, we might have rendered Hongkongers more vulnerable to flu than ever before.

There are three kinds of passengers using our newly expanded airport: resident Hongkongers coming and going, close friends and relatives coming to visit them and various parties in the commercial sphere obliged to visit for business reasons.

There are few casual leisure tourists or businesspeople scouting for new opportunities. Our Covid-19 package is a strong disincentive, and the consequences were revealed in recently published GDP figures. Open Singapore revised its GDP growth forecast to 3 to 4 per cent while effectively closed Hong Kong is expecting a 3.2 per cent drop in GDP.

There is no escaping this last point. We are only fooling ourselves if we claim our city is opening up when it obviously isn’t. The most we can say is that we are on the way. Potential visitors are perfectly entitled to reply, “let us know when you get there”.

The recent financial summit and Legal Week were very successful, but only because participants benefited from various exemptions. We need many more such events, but their impact will be blunted if they can only succeed provided the normal protocols are not applied. 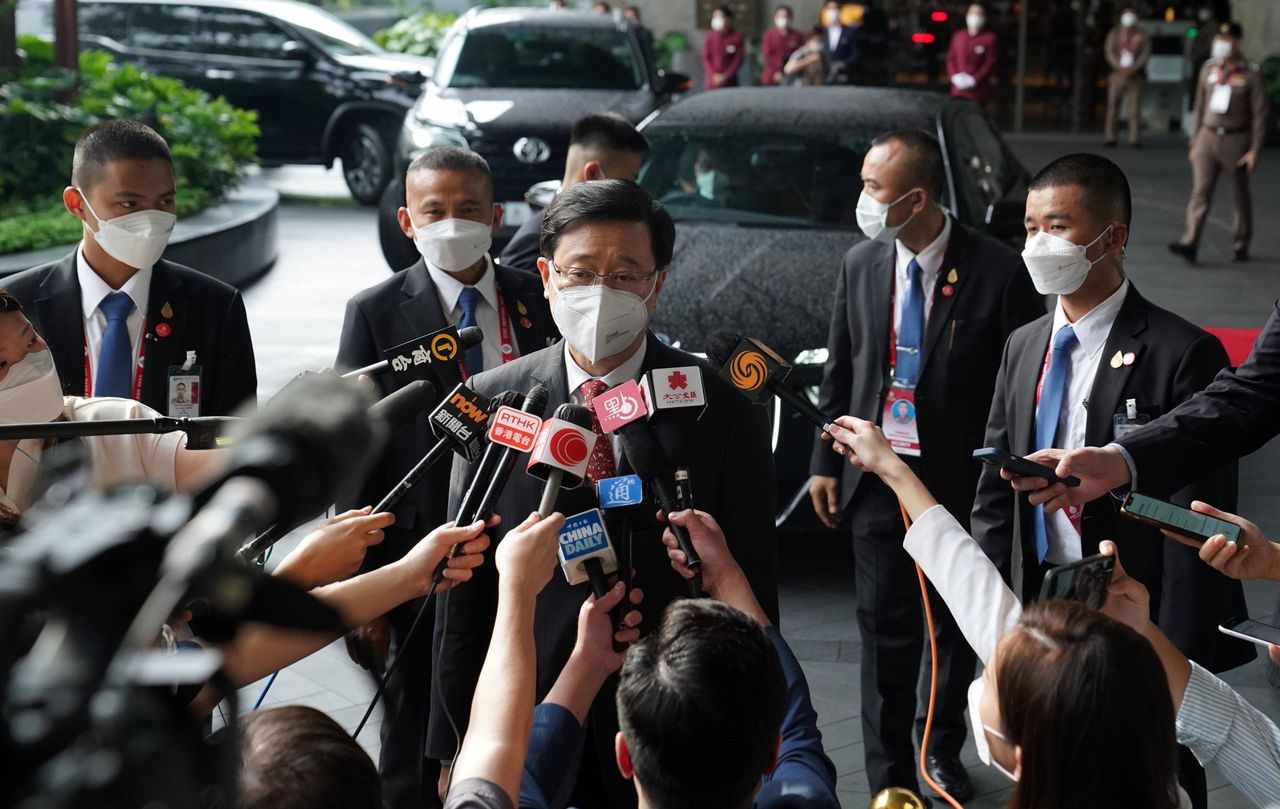 Chief Executive John Lee Ka-chiu arrives at the Sindhorn Kempinski Hotel in Bangkok on November 17 ahead of an Apec meeting.
Lee led a delegation to an Asia-Pacific Economic Cooperation (Apec) meeting in Bangkok last week to talk up Hong Kong as a place to do business. This was a good move, and in terms of economic fundamentals there was much for him to brag about.

But think how much more compelling the case would have been if he was able to say in a final flourish: Hong Kong is open now, come and see for yourself.

He urged us last week not to obsess about 0+0, and he is right. We should focus on dispensing with the entire package.
#covid 19  #covid