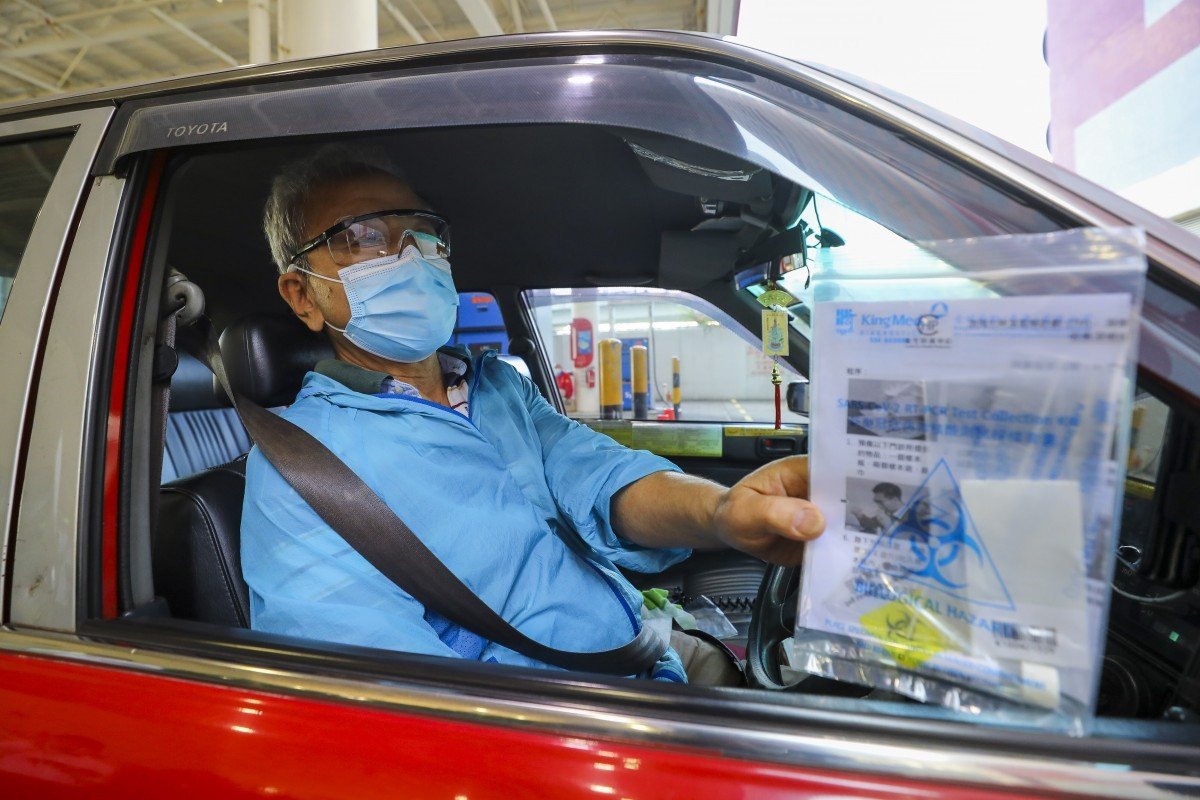 Hong Kong’s cluster of infected taxi drivers continued to grow on Tuesday, on the eve of the government imposing tougher quarantine rules designed to curb Covid-19’s silent spread in the community.

A 29-year-old man infected locally through an unknown source was among the city’s four newly confirmed coronavirus cases, the rest of which were all imported.

A taxi driver, 76, also preliminarily tested positive on Tuesday, taking to five the number of cabbies contracting the coronavirus this month, in what experts said bore an alarming resemblance to the pattern of previous contagion surges.

In an attempt to stave off a potential fourth wave of Covid-19, the government from Wednesday is banning people from visiting those under quarantine. A government expert told the Post that local hotels were recalibrating the digital keys to guest rooms so people under quarantine could only open their door once to enter, in a major step-up of isolation measures.

Dr Chuang Shuk-kwan, head of the communicable disease branch of the Centre for Health Protection, said the Transport Department had already started a fresh round of testing for cabbies.

“I think the taxi driver case may signify that this occupation is a high-risk one. That’s why the government is arranging targeted group testing … to see if there are any other taxi drivers infected,” she said.

The 76-year-old taxi driver, from Sha Tin, was one of fewer than 10 preliminary positive cases revealed on Tuesday. The cabbie, who usually works in Kowloon, developed a mild cough on November 10, before suffering from shortness of breath on Monday.

The case triggered the temporary suspension of classes at Hoi Ping Chamber of Commerce Secondary School in Ho Man Tin, where a member of the driver’s family works. The closure, to allow for disinfection, would run until at least the release of the staff member’s test results.

Health officials last week said there were signs of a fresh wave of Covid-19 infections after four taxi drivers living in different districts were among the confirmed cases on Wednesday.

The other two preliminary positive cases, connected to previously reported cases, included a 50-year-old man working as a security guard in Chuang’s London Plaza in Jordan, where another guard was confirmed infected on Saturday.

More than 10 workers on the same day shift as the security guard who tested preliminary positive would be sent to a quarantine centre.

“There might have been some cross infections occurring in a changing room,” Chuang said. 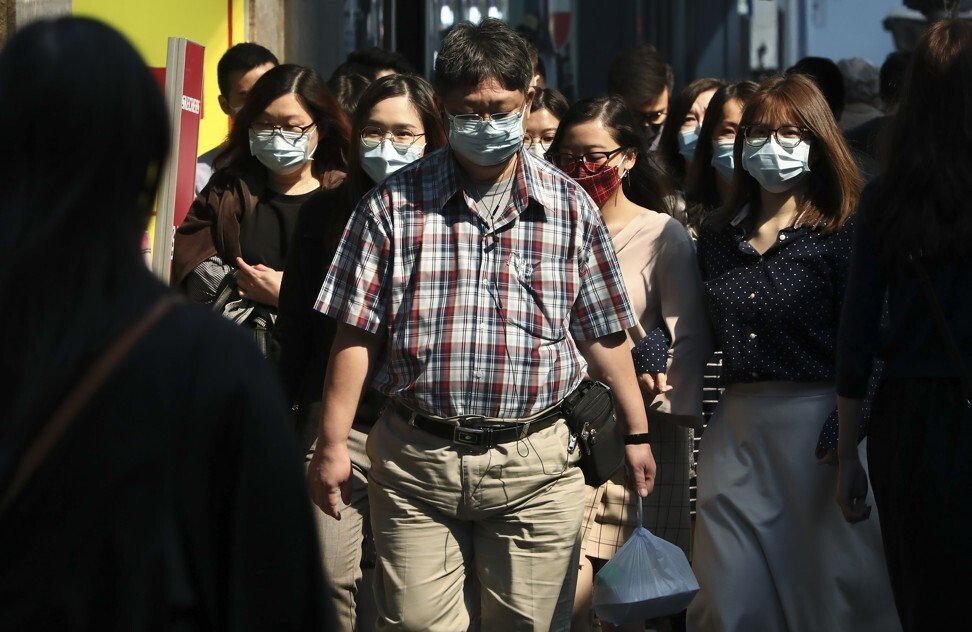 Officials in Hong Kong are tightening some Covid-19 rules in an attempt to prevent a fourth wave of infection.

An 82-year-old, who shared a home with the security worker, has also tested preliminary positive for the virus.

Tuesday’s only confirmed local case involved a 29-year-old man working in engineering. The source of that infection was untraced.

The other three cases were imported and comprised two aircrew staff from Turkey and Germany, as well as an arrival from Britain.

Based in a Lai Chi Kok office, the locally infected man typically went to a construction site in Chong Yip Shopping Centre, Sai Wan, up to three times a week. Chuang said more than 10 staff in the office would need to be quarantined.

The 29-year-old’s family members, who lived separately but would visit his Yuen Long flat to help tidy up, would also need to be sent into confinement. 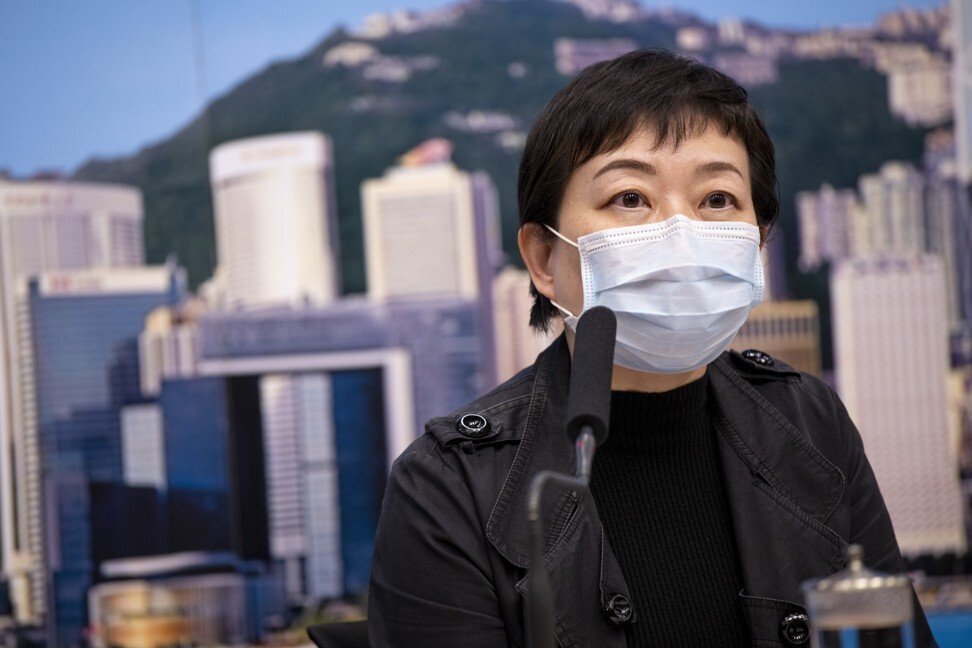 Dr Chuang Shuk-kwan, head of the communicable disease branch of the Centre for Health Protection.

As of Tuesday, the city had recorded a total of 5,470 confirmed Covid-19 cases, with 108 related deaths.

A range of epidemic control measures would be tightened to prevent a fourth wave of infections, the government announced on Saturday.

While all people arriving from countries outside China had been required to undergo their mandatory 14-day quarantine in hotels since last Friday, visiting them would be banned from Wednesday.

The ban would be set out in the quarantine order issued to those arriving in the city. Anyone violating the order faces a penalty of up to six months in jail and a maximum fine of HK$25,000.

Officials made the decision after local researchers found that a new coronavirus strain circulating in the city might have come from Nepal and India.

Experts previously said the arrangement of allowing visits for people under quarantine was a loophole that contributed to the spread of the virus from imported infections to locals.

Those in quarantine could have food or goods delivered, health officials said, but they would have to be left outside hotel rooms and there could be no face-to-face contact.

People requiring a carer during quarantine could do so by seeking approval from the health authorities, and that carer would also need to be quarantined for 14 days.

Professor David Hui Shu-cheong, a Chinese University respiratory medicine expert who advises the government on the coronavirus, believed the loophole had been plugged with the new rule.

He revealed that officials said at a meeting with experts that many hotels were recalibrating the digital keys to their guest rooms, so they could only be used once to open the door during the quarantine period.

“Most hotels have the technological capacity to do so, we were told. Hotel staff can help deliver the food, and use their key to open the door,” Hui said.

“Those visitors usually drop the items at the front desk, and hotel staff bring them to the rooms,” Tsui said.

He said requiring a key card to operate the lifts to floors where guests stayed, a design already in place at many hotels, could deter visitors from heading directly to rooms.

It was more common to see people under quarantine sneaking out to pick up takeaways, smoke or talk to their neighbours, he added.

While the industry did not have enough staff to monitor guests under quarantine, Tsui said the government could deter violations by stationing law enforcement officers in hotels.

The government, meanwhile, announced the further tightening of testing and isolation arrangements for consular and diplomatic officers previously exempted from compulsory quarantine.

With effect from Wednesday, officers who had visited very-high-risk places in the 14 days prior to arrival in Hong Kong would need to possess a negative result for a Covid-19 test taken within 48 hours of boarding their flight to the city. They would also be tested on arrival at Hong Kong airport, where they would need to wait for the results.

Aside from consuls general or representatives of equivalent level, all other officers would be subject to self-isolation for 14 days. They would also need to return a deep throat saliva sample on the 12th day of their arrival for another Covid-19 test.

Those who had not visited very-high-risk places in the 14 days prior to arrival, and who could provide a negative test taken in the last 48 hours, would also need to take the Covid-19 test upon arrival, but would not have to wait for their results at the airport. Those without a recent negative result would have to wait for results.

Both groups would also have to return a deep throat saliva sample on the 12th day for another test.

The use of public transport to their accommodation is also banned.

A government spokesman said: “The testing and quarantine arrangement imposed by the government on incoming passengers was made on the basis of public health risk assessment and has been adjusting rapidly in response to the latest epidemic situation and experts’ views.”

Separately, the government said its pilot trial of a rapid test at the airport, known as RT-LAMP, was to end on Tuesday after previously being extended for a week to collect more samples.

High hopes had been placed on the test to shorten waiting times at the airport and pave the way for further reopening of international travel, as the current PCR test took at least four hours to produce results. But some experts cast doubt on the accuracy of the rapid test. It was expected that the government would analyse the test results and announce findings later.