Hong Kong’s retail sales for July rose 4.1 per cent year on year, buoyed by an improving labour market, while the government said it expected the distribution of the latest round of e-vouchers would boost consumer spending further.

Provisional figures released by the Census and Statistics Department on Wednesday showed July sales totalled HK$28.3 billion (US$3.61 billion), up slightly from the HK$27.7 billion recorded in June.

Online retail sales for July increased 8.6 per cent from the same period last year, reaching HK$2.2 billion to account for 7.9 per cent of the total value. Online retail growth in the first seven months of 2022 increased by 21.8 per cent compared to last year.

A government spokesman attributed the latest increase to a better labour market which supported consumer spending, adding that the value of retail sales had resumed a moderate year-on-year increase this month.

He said, however, that a lower base of comparison had also partly contributed to the year-on-year increase.

The spokesman added that the latest phase of the consumption voucher scheme “should render support to consumption demand in the coming months”.

Some 6.3 million of Hong Kong’s population, including new residents and arrivals from mainland China, are eligible for the second batch of the government’s voucher scheme, which was designed to boost an economy hammered by the coronavirus.

Authorities began handing out a total of HK$5,000 earlier this month after the first round of the same amount was distributed in April. 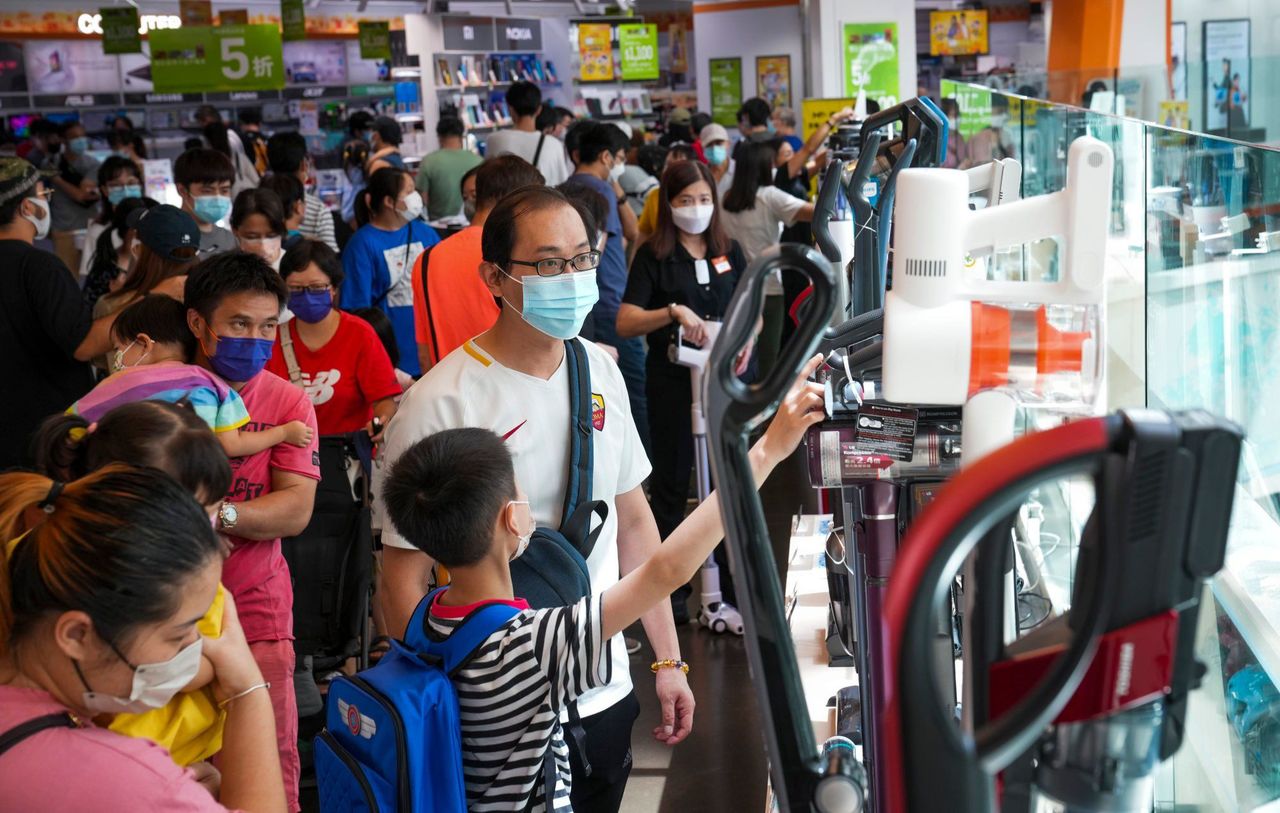 Shoppers flock to a shopping centre in Kwun Tong on the day Hongkongers received the second phase of consumption vouchers in August.

But tighter financial conditions and the local pandemic situation would also have bearings on the performance of the retail sector, the spokesman added.

“Reopening borders is still the most important way to improve the sector,” she said. “The government needs to stabilise the economy and quickly find ways to reopen. If borders remain shut for one more day, we are missing out on 20 to 30 per cent of business daily.”

The government had earlier downgraded its full-year forecast for Hong Kong’s economic performance from 1-2 per cent expansion to between 0.5 per cent growth and 0.5 per cent contraction on the back of a worsening external trade environment, which experts said had affected consumers’ spending power domestically and globally.

A recession is defined as a contraction of GDP for two or more successive quarters. The last time Hong Kong fell into recession was in 2020 during the initial phases of the pandemic.

The downgrade reflected the havoc wreaked by the fifth coronavirus wave combined with the government’s “dynamic-zero” Covid-19 policy that kept the city largely closed off from the world and mainland China.

It is the second time authorities have lowered their annual growth forecast in three months.

The city’s jobless rate has fallen from 4.7 per cent in the April to June period to 4.3 per cent from May to July this year, marking the third consecutive improvement in the labour market.