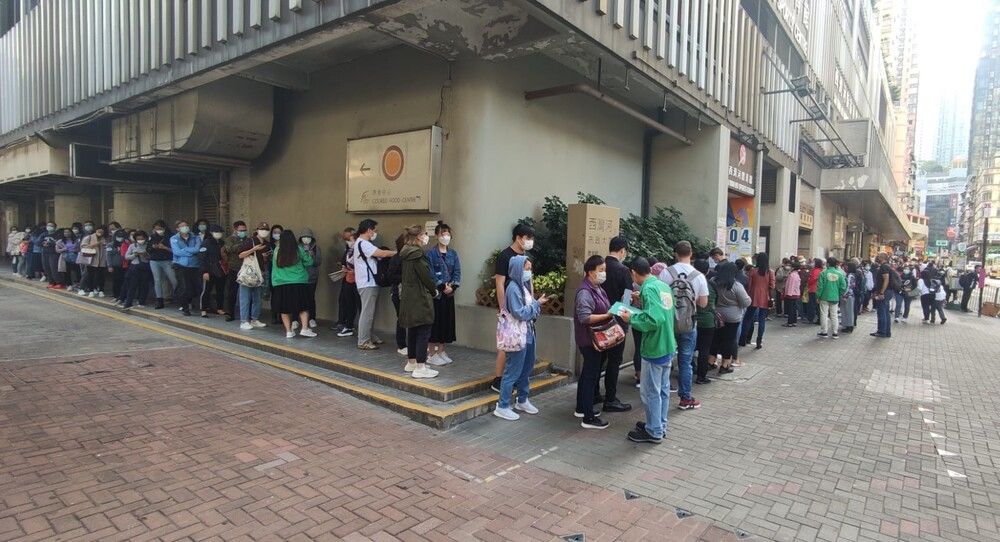 More Hong Kong residents are getting their first Covid-19 vaccinations, though the majority are receiving a Chinese immunization that studies have shown gives inadequate protection against the recently arrived omicron strain.

The city administered about 18,000 initial injections on Tuesday, the most in four months and nearly quadruple the number given a week earlier.

The surge came as the highly transmissible variant began spreading in the community and a looming expansion of the vaccine mandate led many people to fear losing access to restaurants and leisure facilities. The jump in first doses outpaced the roughly 16,400 booster shots given.

The rising demand shows progress is being made against vaccine hesitancy in Hong Kong, a problem particularly among the elderly, where just 22 percent of the over-80 population has received an initial shot. The recent surge in inoculations came as city leaders announced that people must have at least one dose to enter restaurants and leisure facilities starting on Feb. 24.

Among the newly vaccinated, 61 percent opted for Sinovac Biotech Ltd.’s shot that has been shown to be less potent against omicron and other strains. The remainder received BioNTech SE vaccine that uses new mRNA technology to target the virus’s genetic makeup.

“The people who are now opting for Sinovac will remain at more risk from both omicron and delta,” said Nicholas Thomas, an associate professor at the City University of Hong Kong who has edited several books on public health. “When Hong Kong does reopen its borders -- initially to China but then to the rest of the world -- a sizable portion of Hong Kong’s vaccinated population will remain at risk.”

They may be most vulnerable to omicron. Initial studies found that three doses of the BioNTech vaccine are needed for adequate protection against it, while even three doses of Sinovac’s shot aren’t enough. Despite this, the Sinovac immunization is often chosen by people trying to avoid the side effects that a potent mRNA shot may carry.

“The vaccine hesitancy in Hong Kong was created by miscommunication over vaccine risk among the elderly and those with chronic diseases,” said Leung Chi-chiu, former chairman of the Hong Kong Medical Association’s advisory committee on communicable diseases. “As the frequency of adverse effects is higher for mRNA vaccine, many of them might be more inclined to take the inactivated vaccine.”

The overall protection provided by Sinovac shots remains to be seen, according to Leung, a respiratory expert. While the neutralizing antibodies might suggest higher efficacy of mRNA vaccine against omicron, the countries most severely affected now were using mRNA vaccines extensively, he said.

“We need to wait for real world data” to see whether inactivated vaccines that target different portions of the virus offer more protection against infection or disease caused by omicron, he said.

The jump in vaccination comes as evidence emerges that omicron is circulating in the community. The city is working to contain a cluster tied to a packed restaurant at the end of December. Officials also disclosed this week the first preliminary positive case of Covid-19 from an unknown source in almost three months.

The health department suspects that the patient, an unvaccinated man who works in the densely populated North Point area of the city, carries the omicron variant. Whole genome sequencing still needs to be conducted to confirm if that’s the case, according to a government statement on Tuesday.

The news raises the possibility that coronavirus may be spreading in the increasingly isolated Asian financial hub via routes of transmission that health officials haven’t been able to trace.

The government on Tuesday also reported a preliminary positive infection -- the seventh linked to the restaurant cluster -- in the 13-year-old daughter of an earlier patient. Another two preliminary cases in people with ties to those with earlier omicron infections were reported early Wednesday.