Chief Executive John Lee calls the tournament ‘one of the most popular sporting events in Asia’ and ‘living proof’ Hong Kong has returned to the world.

Officials hailed the return of the rugby Sevens as “a resounding success” on Sunday, as the city’s leader joined tens of thousands of fans at a packed Hong Kong Stadium to watch Australia’s thrilling last-gasp win.

After more than three years away, the tournament lived up to its reputation as Hong Kong’s landmark sporting event, and the tears on the faces of the Australian players spoke volumes about what it meant to them.

Calling it “one of the most popular sporting events in Asia”, Chief Executive John Lee Ka-chiu said the tournament was “living proof” that the city had returned to the world stage.

After hosting global financial leaders for a three-day summit before the Sevens, and with a series of other events on the horizon, including the Hong Kong Squash Open later this month, Lee said the city was “ushering in a new chapter”.

“The Pearl of the Orient is shining brighter than ever,” he said in a social media post accompanied by a video clip he narrated.

And while the Sevens had been absent since 2019 because of the coronavirus pandemic, Australia turned the clock back even further on Sunday, winning in Hong Kong for the first time in 34 years and unseating a Fiji team that had not lost a final in the city since 2014.

In many ways, Nathan Lawson’s thrilling try to seal a 20-17 win was a fitting end to a tournament that has roared life back into Hong Kong.

Although neither Lee nor his deputy, Chief Secretary Eric Chan Kwok-ki, spoke to the media during their time at the Sevens, Chan said in an online post that the government would continue to review the Covid-19 situation and relax various measures when appropriate.

“This will allow the public to resume normal life as soon as possible, and accelerate Hong Kong’s speedy convergence with the international community and continue to show its glory,” he added.

In contrast to the strict measures of the past three years, the three days of the Sevens have been a more relaxed affair, and even Lee, who was spotted enjoying a beer with colleagues and organisers, joined in the party atmosphere. 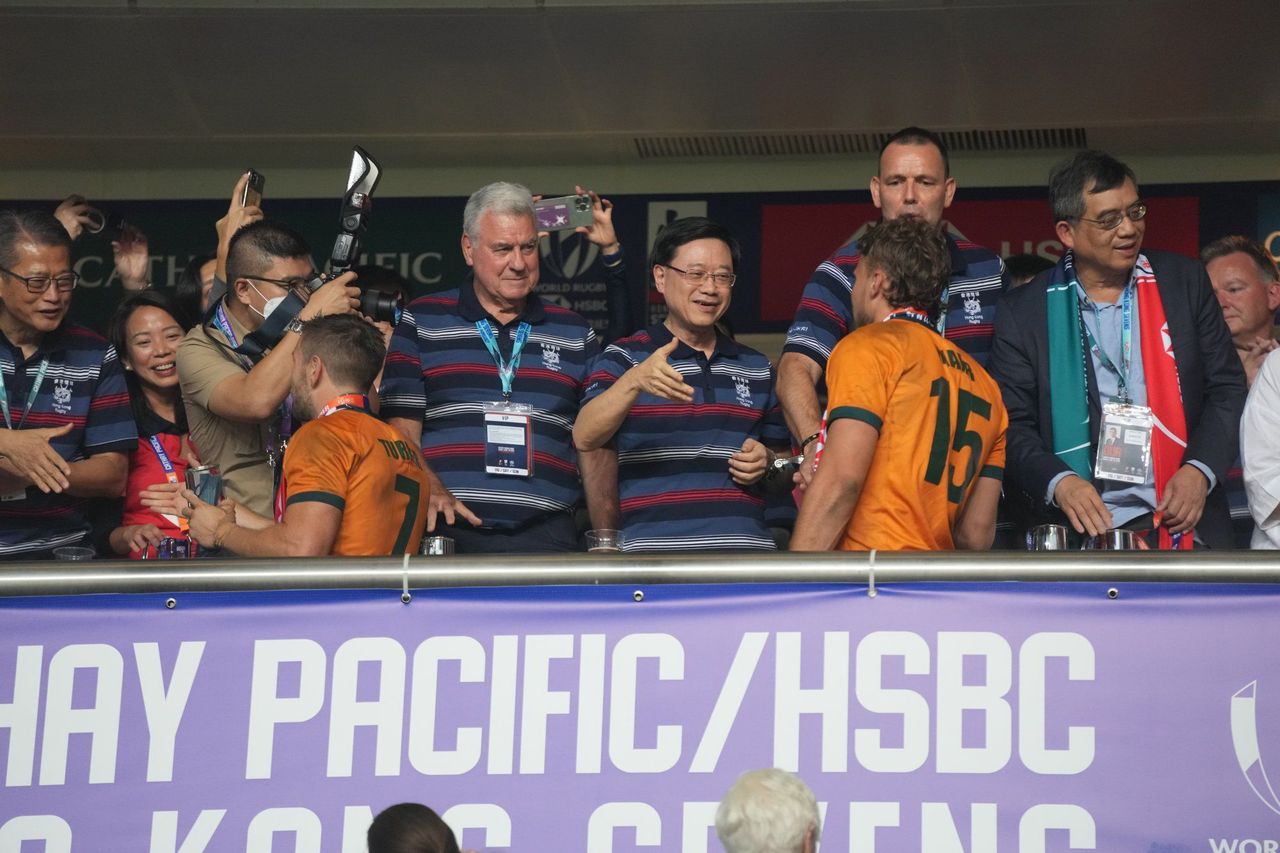 From the costumed ranks of Power Rangers, Teletubbies, and a group of Ronald McDonalds who were “loving it”, the electric crowd prompted Hong Kong player Russell Webb to say “it was so loud” he could not tell the ground was short of capacity.

“It’s great to see it back,” Paul Teague, a Hong Kong resident, said. “It’s not quite as full on as it has been in previous years, but it’s actually better than what I expected. It’s just what the city needs right now.”

A World Rugby spokesman thanked Hong Kong officials for delivering a “safe, secure and highly enjoyable event” and said the organisation was already looking forward to returning in March, for the last tournament of the season which they hoped would be “bigger and better”.

“With a happy, vibrant atmosphere in the stands, scintillating world-class rugby on the pitch, and a sense of joy and community all around, the return of the Cathay Pacific/HSBC Hong Kong Sevens was a resounding success,” the spokesman said. 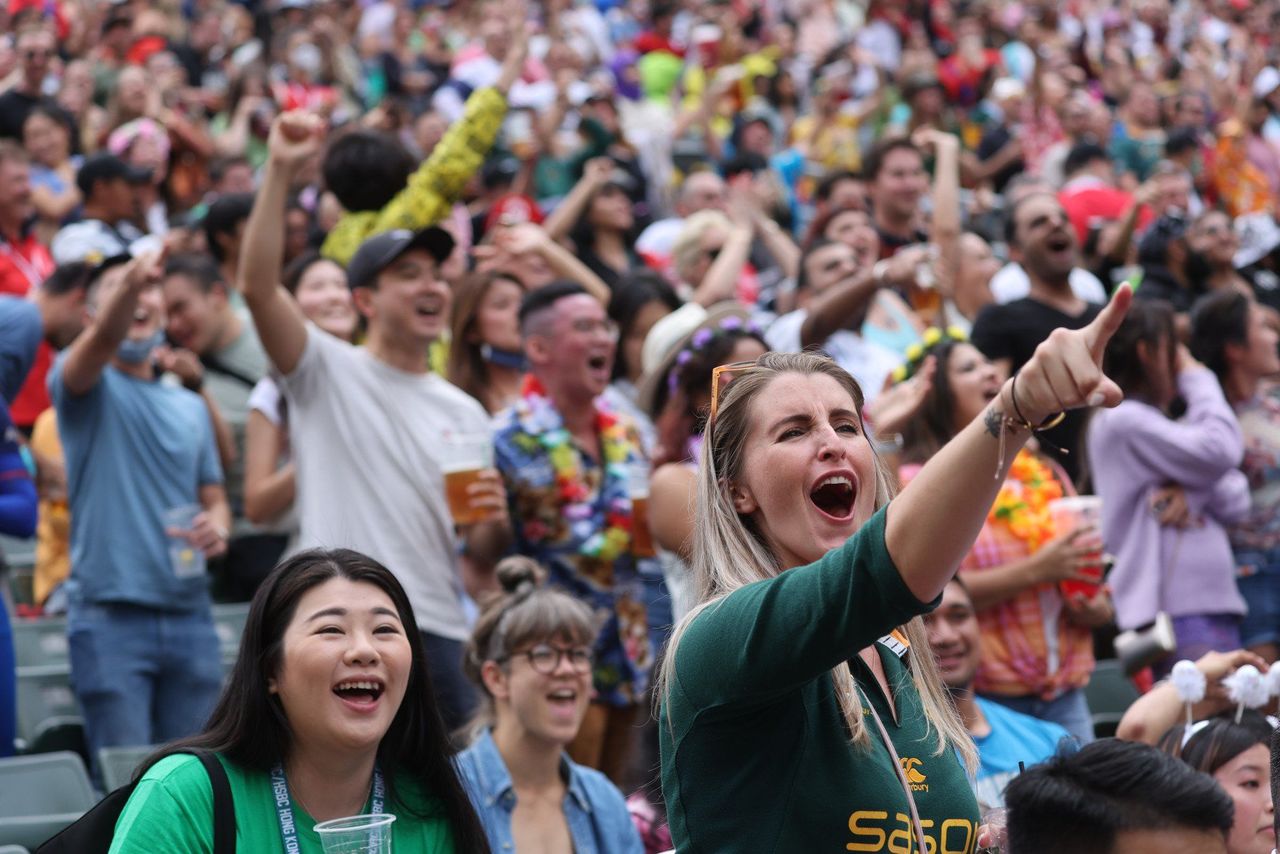 Fans go wild on the last of the Hong Kong Rugby Sevens.

Organisers will certainly hope the restrictions on crowd numbers, which were limited to 85 per cent capacity by Covid measures, are lifted, but they would have been buoyed by the 65,000 that passed through the gates over the past three days.

The Hong Kong Rugby Union estimated that the cost of hosting the event was likely to be near HK$50 million (US$6.4 million), and while in the past the Sevens had pumped HK$400m into the economy, the lack of overseas spectators was expected to cut that by about HK$100m or more.

Vendors, too, did a roaring trade, with the boss of Ebeneezer’s Kebabs & Pizzeria reporting a boom at its concession stand inside the stadium.

Sunny Rekhani, one of the chain’s managing directors and owners, said they had sold almost 1,200 kebabs by midafternoon on Sunday, and were selling 1,400 slices of pizza per day.

“We found business to be very good and it is still ongoing, today is almost 25 to 35 per cent better than yesterday,” he said. 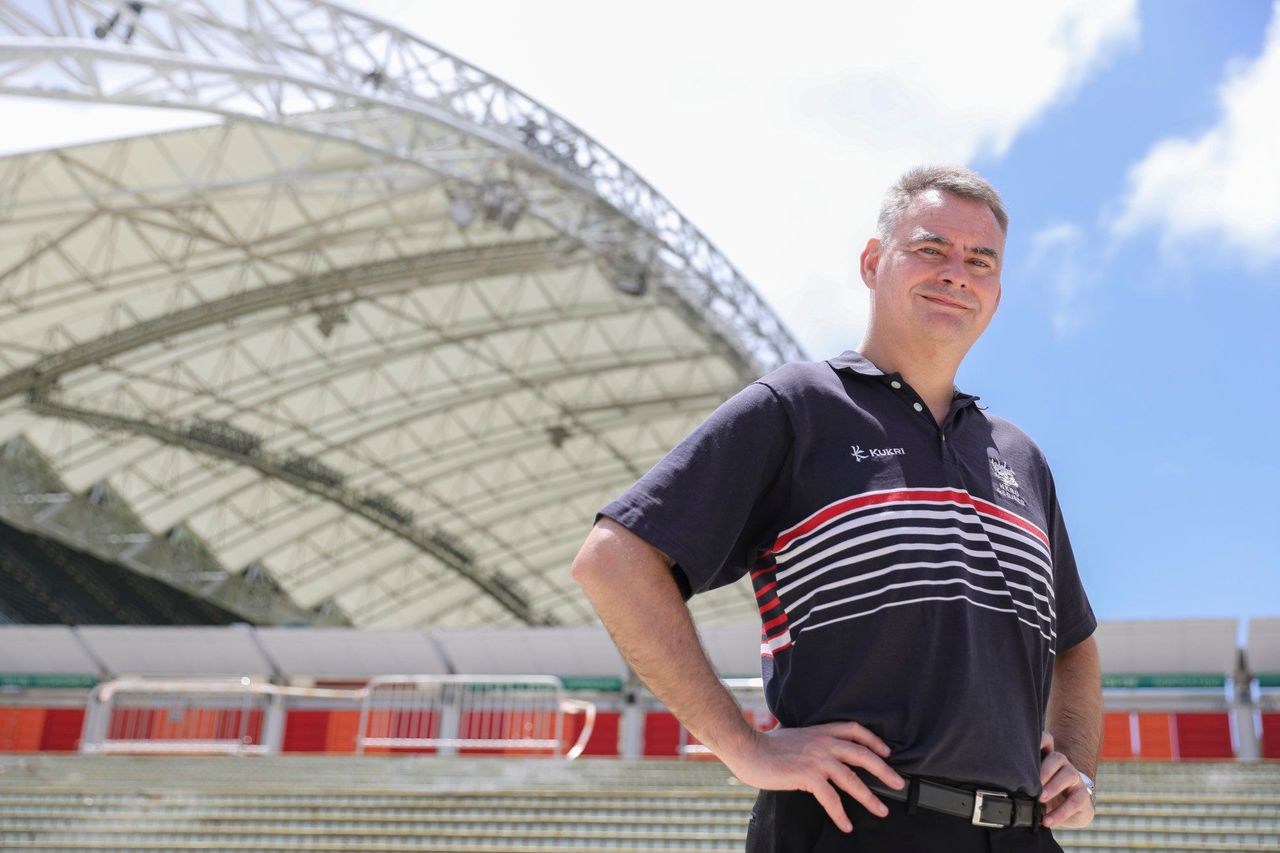 Robbie McRobbie, the Hong Kong Rugby Union’s CEO, said the event was about more than rugby, and he hoped its success would help rescue a sports event industry hit hard by the pandemic.

“There are people whose livelihoods have been devastated and if we don’t resurrect the sector now, these people will be gone, they’ll be doing other jobs,” he said. “We need to get things going now or there’ll be more of a drain of talent.”

While there was no official count of overseas fans, at least one set enjoyed their day at the finals, with Reiner Du Plessis, a visitor from South Africa, hosted by organisers after being turned away on Friday because he was still under medical surveillance.

The 38-year-old said the past three days with the amber code had been “difficult”, but he was happy he and his friends were provided with “proper food” at the corporate box.

Du Plessis admitted that the letdown was their own fault, saying that he and his fellow travellers had not intended to cause “any havoc”.

“We have to respect the government’s regulations … at least I’m having fun now,” he said.

McRobbie said he was glad for the “dark days” to be over, but much more work had to be done to revive the sporting events sector.

“To me, it’s more than the HKRU, it’s a sports event industry getting going again … A lot have already left the sector. We need to get things going now or there’ll be more of a drain of talent. We need to retain that in the events sector or it will be more difficult to bring it back in future.”