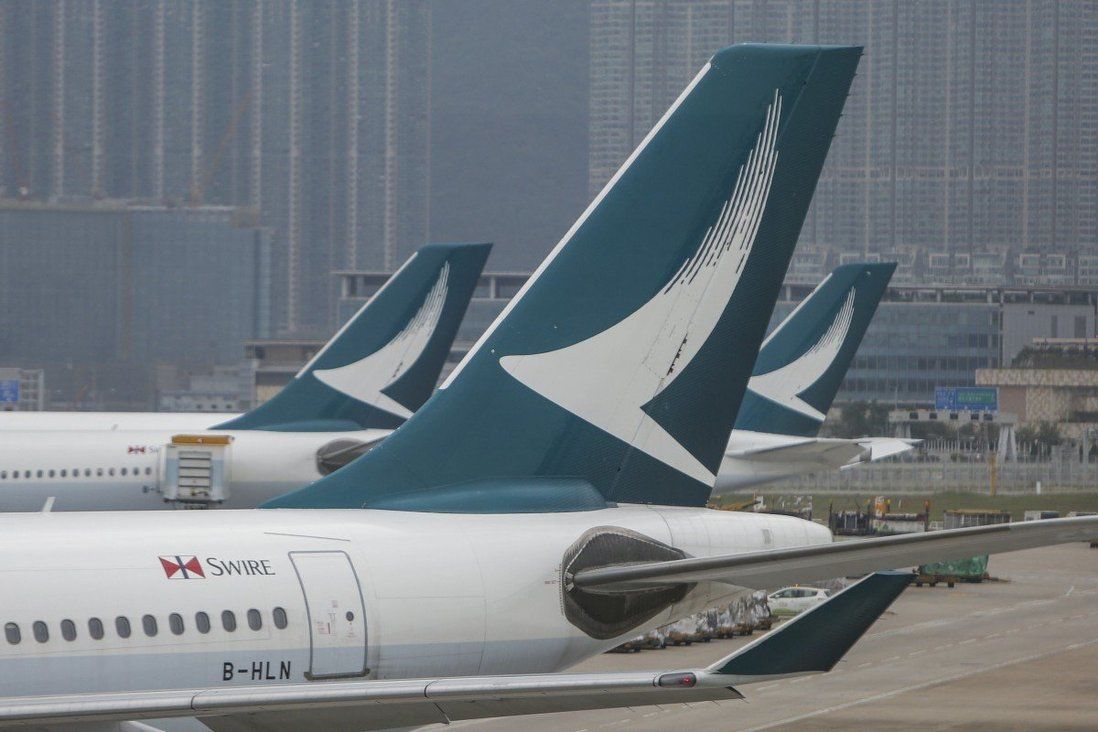 Carrie Lam says investigation looking into whether crew members serving on passenger flights had returned on cargo ones.

Hong Kong’s leader has vowed to take legal action against Cathay Pacific if the airline is found to have exploited loopholes to bypass quarantine rules for its pilots and other staff, amid mounting calls from the pro-establishment camp to penalise the carrier.

The city’s flagship airline has been under fire in recent weeks for sparking the fifth wave of the Covid-19 pandemic after at least four of its aircrew members broke home isolation rules and visited restaurants and bars while infected with Omicron.

The pressure increased last week when dozens of officials and lawmakers from the pro-establishment camp were ordered into quarantine after it emerged they went to a birthday party along with a guest infected with a viral strain believed to be linked to a Cathay employee. 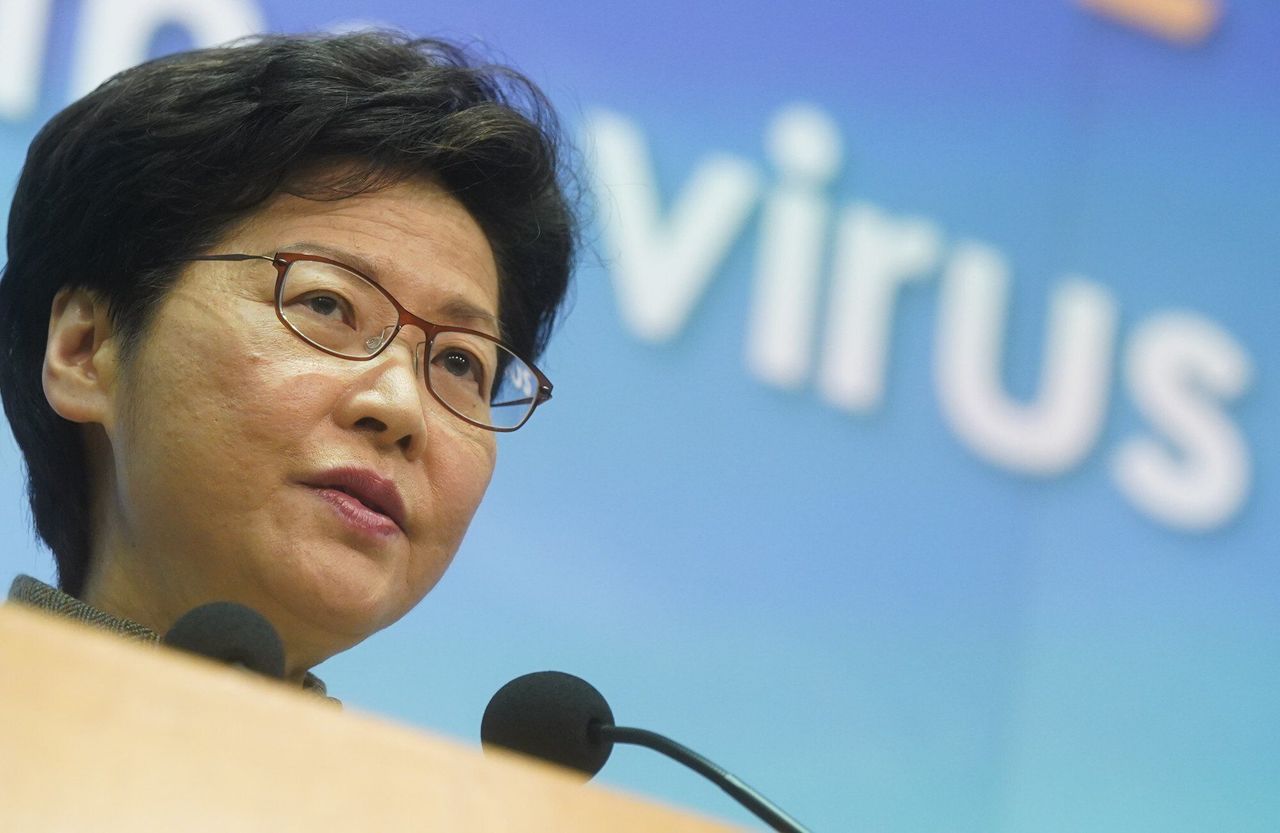 Social-distancing rules might have been broken at the gathering, such as by guests failing to wear a mask or use the government’s “Leave Home Safe” risk-exposure app. A second guest has also since been confirmed as infected.

While many of the officials have since apologised for attending the event, some have also blamed the airline for triggering the latest outbreak in the first place.

Over the past two days, pro-Beijing newspapers have also been doubling down in defending the officials and lawmakers, while turning the focus on Cathay.

Speaking before meeting her top advisers on Tuesday, Chief Executive Carrie Lam Cheng Yuet-ngor said the investigation concerned whether Cathay crew members serving on passenger flights had returned to the city on cargo ones so they could circumvent hotel quarantine in favour of the laxer home confinement arrangement.

“If that is the case, it will be a big [issue of] non-compliance,” Lam said. “This has to be put under a full investigation. We will take legal action once we have the full evidence.”

On Tuesday night, Cathay said it was common practice for cabin crew to travel on outbound passenger flights and back on cargo-only passenger aircraft between July and December last year to comply with public health regulations.

It said the arrangement was highly effective in keeping the city’s supply chains and cargo traffic going safely and smoothly. The airline also said it consistently followed the regulations, acted with full transparency and provided accurate documentation to the authorities.

As a result of tightened regulations on December 29, Cathay staff who have done a layover at an overseas location must complete compulsory quarantine at a designated hotel whether they arrive in Hong Kong on passenger or cargo flights.

A veteran pro-establishment politician, who declined to be named, said Cathay, whose majority shareholder is London-based conglomerate John Swire & Sons, was an easy scapegoat for the pro-Beijing camp to deflect blame arising from the birthday party scandal.

“For the pro-establishment camp, Cathay Pacific is not ‘their own people’. Pointing the finger at the carrier can ease the political pressure facing them,” the politician said.

Lawmaker Michael Luk Chung-hung, from the pro-establishment Federation of Trade Unions party, praised the chief executive for going “down the right path”.

“Apart from a criminal probe, the government should also consider how to seek compensation through legal action and help citizens to do so,” said Luk, who had been urging the public to stop fixating on the scandal and focus on the airline’s alleged misdeeds instead.

Frankie Yick Chi-ming, the lawmaker for the transport functional constituency, chastised the rule-breaking aircrew members for being “irresponsible”, saying their actions had cost taxi drivers and bus operators 30 per cent of their business.

He called on the government to provide subsidies to the transport sector and not to overlook them like before.

Before the current outbreak, the government required arriving cargo aircrew members to isolate themselves for three days at home. But after the first two Cathay employees flouted the rules, authorities required they spend the time at a hotel and later increased the number of days to seven.

Lam reprimanded Cathay airline chairman Patrick Healy and CEO Augustus Tang Kin-wing on December 31 over the rule breach and demanded they review the incident. The airline offered an apology and said two of the four aircrew members were no longer with the company.

But the airline again fell into the cross hairs last week when the birthday party scandal erupted. A 37-year-old woman infected by one of the crew members joined the party for Witman Hung Wai-man, a delegate to China’s legislature and the principal liaison officer for Hong Kong at the Shenzhen Qianhai Authority.

Fourteen senior officials and 20 lawmakers attended the bash at Spanish restaurant Reserva Iberica in Wan Chai on January 3, along with 221 guests. Authorities said 111 were confined at the government’s Penny’s Bay quarantine camp.

Commenting on the chief executive’s remarks on Tuesday, centrist lawmaker Tik Chi-yuen, the sole non-pro-establishment candidate in the 90-seat Legislative Council, said Lam appeared to be taking a two-pronged approach.

On one hand, Lam was holding the airline accountable, he said, adding: “Many Hong Kong people are footing the bill for Cathay Pacific now.”

But on the other hand, Lam was also keeping her options open in regards to investigating the officials who went to Hung’s party, Tik noted.

“The ball is now in her court to show she is determined to stop the virus as well as enforce an accountability system,” he said.

But Democratic Party chairman Lo Kin-hei feared the government might not apply the same standard of penalties to both the officials and Cathay should fault be found.

“It is still damaging if officials were found to not have used the ‘Leave Home Safe’ app,” he said. 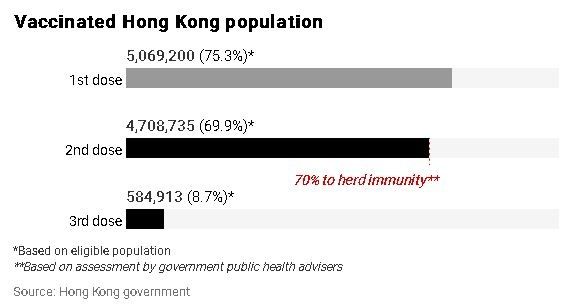 Reserva Iberica is among 3,043 restaurants operating in the Type D category for pandemic controls, out of 16,000 licensed restaurants and bars. It can seat no more than six people per table, with the maximum number of diners capped at 240. Two-thirds of diners sitting at the same table for non-banquets must have received at least one dose of a vaccine and use of the app is mandatory.

But Lam revealed the restaurant had failed to meet the requirements to operate as a Type D eatery.

“There are questions on whether the restaurant maintained sufficient space among the tables at the party,” she said.

While the event drew 221 guests, the ultimate figure could be bigger because some people who were not invited also joined and some attendees did not use the official “Leave Home Safe” app as required.

The restaurant suspended operations on January 7 until further notice and went through a thorough disinfection. Health authorities also revealed the restaurant had a new person in charge who did not turn on the CCTV on the night in question, while a security camera operated by its neighbour was not positioned in a way that allowed it to capture the entrance of the eatery.

Three officials and four lawmakers remain in isolation at Penny’s Bay, while the others were released after a guest who was thought to be infected was declared a false positive. Several of the 16 lawmakers released have decided against attending Legco’s first meeting of the term on Wednesday and will instead take part remotely.

Lam also responded to allegations made by former senior official Raymond Young Lap-moon, now the chairman of the Chinese Manufacturers’ Association, in a letter published by the Post claiming she was guilty of the same poor judgment for attending a recent wedding party.

But she said the event had taken place on December 5, well before the first locally transmitted Omicron case was detected on December 30.

She noted health minister Sophia Chan Siu-chee warned on December 31 of the significant risks associated with the spread of Omicron in the city.

Lam said the birthday party took place in a crowded restaurant and that an investigation into whether social-distancing rules were broken was still under way.

In a letter to the Post written by an assistant on her behalf, Lam also disputed Young’s assertion that the restaurant complied with all the government’s prevailing social-distancing measures applicable to a Type D establishment, calling it “baseless and arbitrary”.