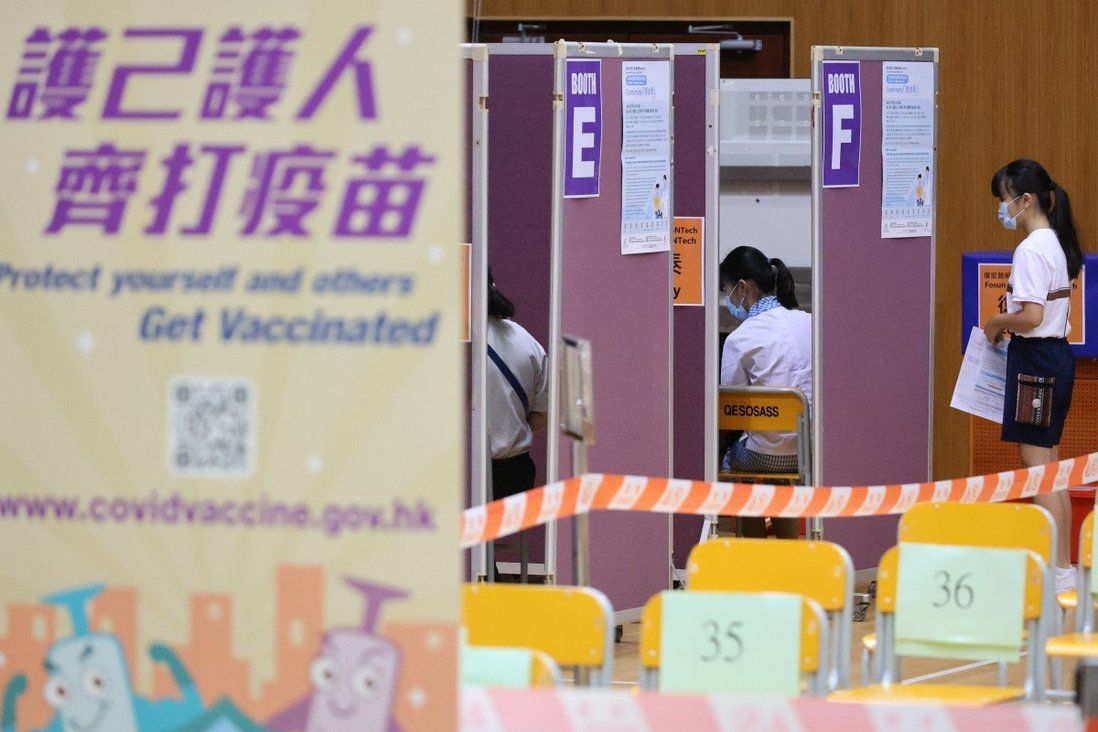 Receiving just one dose of vaccine, rather than the usual two, will reduce the likelihood of heart inflammation in young people by 80 per cent, one expert says.

Adolescents should only take one dose of the German-made BioNTech vaccine for Covid-19 instead of the standard two shots to reduce the chance of heart inflammation following inoculation, scientific advisers to Hong Kong’s government have recommended.

Experts on the two scientific committees under the Centre for Health Protection also agreed on Wednesday that the elderly and people with compromised immune systems, such as those having undergone organ or bone-marrow transplants, would require a booster shot in the future, although more factors would have to be considered before deciding details of implementing it.

“We recommend to the government that adolescents aged 12 to 17 now should only receive one dose of BioNTech vaccine and would not need two doses,” said Professor Lau Yu-lung, chairman of the Scientific Committee on Vaccine Preventable Diseases, following a meeting with his colleagues.

The 12-17 age group in Hong Kong can currently receive only the BioNTech vaccine, as the city is still waiting for clinical trial data before making a decision on including China’s Sinovac as well.

The recommendation came in response to both global and local data showing teenagers to be at risk of myocarditis and pericarditis – typically temporary conditions involving inflammation of tissues around the heart – following vaccination, but generally only after the second dose.

So far, Hong Kong has seen 37 cases of the conditions in minors following vaccination. All but five of the patients were boys, and all but seven developed the conditions after their second dose.

While data was not available on how many young people had already received their second dose of a coronavirus vaccine, more than 289,000 people aged 12 to 19 had received at least one. A total of 4.37 million of people in the city have had at least one jab.

Lau stressed that most of the children who experienced heart inflammation did not develop serious problems, but public hospitals would need to follow up on them. 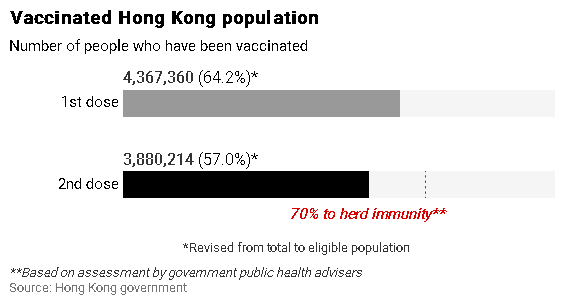 The chances of developing the conditions after just one dose were 80 per cent lower than they were for two, Lau added.

The one-dose recommendation was also considered appropriate given the risk of contracting Covid-19 in Hong Kong remained low.

“The protection offered by one dose would be sufficient,” Lau said.

Britain and Norway have also decided to administer adolescents aged 12 to 15 with just one dose.

Centre for Health Protection controller Dr Ronald Lam Man-kin said certain questions would need to be resolved if the government did ultimately adopt the one-dose recommendation.

“If we adopt it, further discussions will be needed on how to implement it … I believe there will [need to] be a mechanism on whether [adolescents with one dose] will be treated as a fully vaccinated case,” Lam said, adding that parents and young people seeking a second jab would now receive an explanation of the potential risks.

In a statement issued late Wednesday night, the government said that those aged 12 to 17 who were already booked to receive their second dose could choose to cancel their appointments starting on Thursday. Those with “special needs” who opted to go ahead with their second shots, it added, would be told about the new recommendations by vaccination centre staff before making up their minds.

Lau said there was a need to allow for some flexibility in administering two doses for children given that some may need them when travelling to places at higher risk from Covid-19.

Alex Lam Chi-yau, chairman of the advocacy group Hong Kong Patients’ Voices, called on experts to thoroughly explain the change in guidance lest any fears arise about the risk of inflammation or the effectiveness of a single dose.

“The experts need to explain the safety and effectiveness of the BioNTech vaccine to the public to give them assurance about the jabs,” he said.

Meanwhile, when asked whether the age threshold for receiving the Sinovac vaccine – currently 18 – could be further lowered, Lau said only that such a move would need to be discussed by the government’s Advisory Panel on Covid-19 Vaccines and more data would be needed from the manufacturer.

He noted that about 30 to 40 per cent of parents and secondary school students interviewed in a survey he conducted had hoped to receive Sinovac.

Most countries have not yet begun vaccinating children under the age of 12, but in mainland China, those as young as three can receive the Sinovac shots, with the United Arab Emirates implementing a similar threshold for Sinopharm jabs.

In Chile, Sinovac has been approved for children six and up, while Cuba has been inoculating children as young as two with locally developed vaccines.

On the subject of booster vaccines for specific groups, Professor David Hui Shu-cheong, chair of the Scientific Committee on Emerging and Zoonotic Diseases, said on Wednesday that more study was needed, particularly with regards to the length of time between the second and third doses.

The severity of the local pandemic situation would also play a part, he added.

“Currently we have seen zero local cases for a long time. There is no urgent need for the third dose,” Hui said. “If we know when the border will reopen, perhaps we will need to start doing work two months before the reopening and start giving out the third dose.”

Hui said there was also a lack of data on Sinovac booster shots, noting most of the available figures pertained to mRNA vaccines, such as BioNTech.

A number of countries, such as the United States, Britain and Singapore, are planning to or have already begun administering Covid-19 booster shots, mostly targeting specific groups such as the immunocompromised and the elderly. 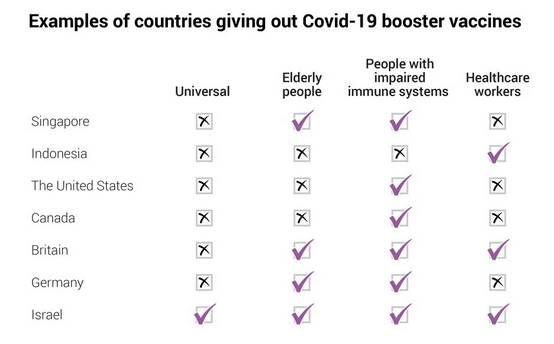 Israel, which has one of the world’s highest Covid-19 vaccination rates, has rolled out booster shots to all vaccinated people aged 12 and up.

Tim Pang Hung-cheong, a patients’ rights advocate with the Society for Community Organisation, said it was reasonable to hold off on booster shots given the relatively stable situation in Hong Kong, but urged the experts to give a timeline of when they would be administered.

“That way the public can feel more at ease and be prepared. The winter is coming and there are more people coming to Hong Kong through the ‘Return2HK’ and ‘Come2HK’ [quarantine-free travel] schemes, which means the risk of contracting Covid-19 will be higher, especially for these vulnerable groups,” he said.

Separately, a captain of a cargo vessel from Indonesia was arrested for allegedly providing false information to the Department of Health last month during the application for free pratique, or permission for the vessel to enter port.

Fifteen of the crew of 23 on board the Thor Monadic – which arrived in Hong Kong waters on August 24 – subsequently tested positive for Covid-19, with all of them found to be carrying the L452R mutation, which has been linked to more transmissible strains.

The patients were isolated in hospital while the rest of the crew was required to remain on the ship for two weeks.