A controversial plan by Hong Kong’s government to make COVID-19 vaccinations mandatory for all foreign domestic helpers when renewing thei...

A controversial plan by Hong Kong’s government to make COVID-19 vaccinations mandatory for all foreign domestic helpers when renewing their work visas does not violate anti-discrimination laws, the chair of the city’s equality watchdog said on Monday.

Ricky Chu, chair of the Equal Opportunities Commission, said during a radio talk show that any discriminatory treatment caused by the measure could be justified and deemed necessary as a pandemic control to protect public health.

Officials could make it mandatory for certain types of workers, such as restaurant employees, to get jabs, but should avoid targeting certain nationals or races since doing so would breach the Race Discrimination Ordinance, Chu said.

The Hong Kong government last week ordered all foreign domestic helpers to get tested for COVID-19 by this Sunday after a Filipino helper was diagnosed with mutant strains of the disease. Those who are applying for or renewing a work visa will need vaccinations. 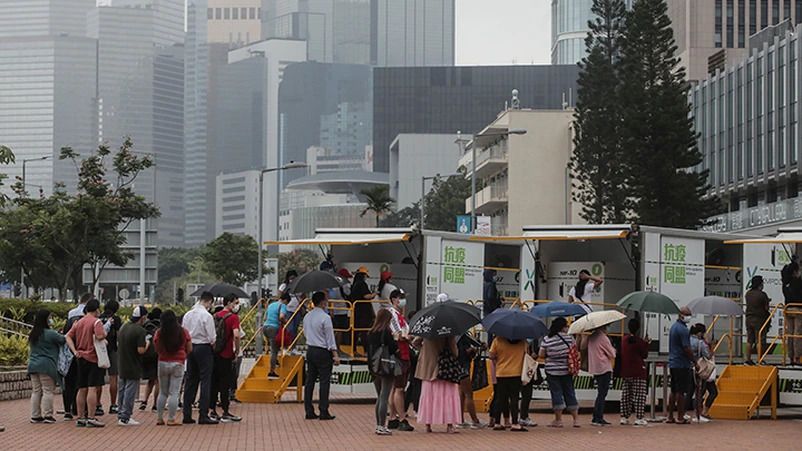 University of Hong Kong infectious disease expert Ho Pak-leung doubted that the measures will be effective against COVID-19 because they do not cover high-risk groups such as medical workers and employees in eldery homes and hotels, he said in a separate radio show.

A migrant workers’ group, Asian Migrants Coordinating Body, on Monday filed a complaint with the equality watchdog against the new measures, calling them discriminatory.

Over the weekend, thousands of foreign domestic workers lined up outside four designated testing centers in Hong Kong. Some of the city’s 48 test stations continued to see long queues of foreign workers on Monday.

One of them, Jaquelyn, who arrived at a testing point in Central at around 7 a.m, said the new measures discriminate against foreign domestic workers.

Philippine Consul General Raly Tejada told the South China Morning Post on Saturday that Hong Kong should not force its 370,000 domestic helpers to get vaccinated unless the same policy applies to all non-resident foreign workers.

The Indonesian Consulate said on Monday that it had not been consulted before Hong Kong officials announced the measures. If vaccination became a mandatory condition of working in Hong Kong, it should be applied to all other non-resident workers and clearly stated in employment contracts, the consulate said.